‘There will be book burnings next’: Historian David Starkey slams BLM for having ‘the same values as ISIS’ and accuses his critics of ‘Salem-style Puritanism’ in first interview since saying slavery was not genocide 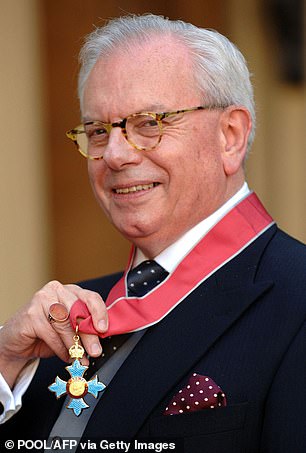 The historian, 75, claims he is the victim of ‘metropolitan wokeness’

David Starkey has claimed ‘there will be book burnings next’ as he slammed Black Lives Matter for having ‘the same values as ISIS’.

The historian, 75, made the claims in his first interview since saying slavery was not genocide because there are ‘so many damn blacks’ around.

He has since resigned his honorary fellowship at Fitzwilliam College, Cambridge, and Canterbury Christ Church University terminated his role as visiting professor.

But Mr Starkey has hit back, claiming Black Lives Matter’s toppling of statues are the same values as ISIS and accused his critics of ‘Salem-style puritanism’.

He told the Telegraph: ‘We are going to see book burnings next. The British Library is now purging its shelves.’

The Tudor historian said BLM was trying to ‘delegitimise’ Britain’s past, claiming supporters were beginning with a conclusion and adapting the facts to suit it. 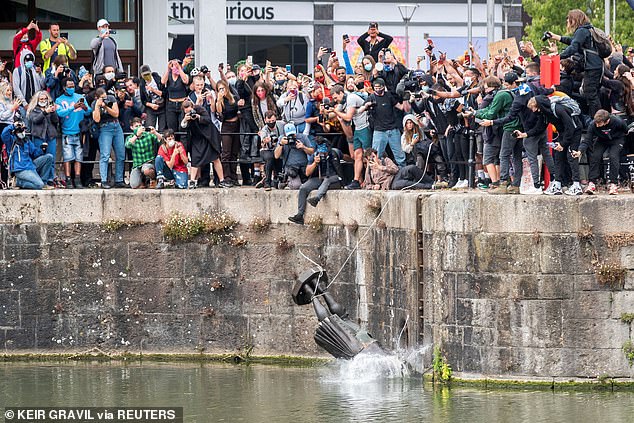 Mr Starkey also spoke about Black Lives Matter, adding: ‘The values that we’re talking about – the values of statue toppling. These are the same values as ISIS.’ Pictured: BLM protesters chuck Edward Colston’s statue in Britsol into the ground in June

He also turned on the universities, branding them ‘woke superspreaders’ who ‘wear a cloak of impenetrable virtue’.

‘Right over the country, you have these kinds of implantations of Metropolitan wokeness.

From the London riots and BLM to the ‘poppy fascism’ of Remembrance Day: Dr David Starkey’s long list of rows

David Starkey attracted widespread outrage in the wake of the 2011 riots, when he said: ‘The whites have become black; a particular sort of violent destructive, nihilistic gangster culture has become the fashion.’

He compounded the offence in many people’s eyes by adding that the outbreak of violence proved Enoch Powell’s notorious ‘rivers of blood’ speech was accurate ‘in one sense’.

The next year, Mr Starkey used a speech in the Palace of Westminster to compare Alex Salmond to Hitler, saying the then-First Minister thinks that ‘the English, like the Jews, are everywhere’.

In 2009, he courted controversy by criticising the public attention on Henry VIII’s wives, saying: ‘It’s what you expect from feminised history, the fact that so many of the writers who write about this are women and so much of their audience is a female audience.’

After the convictions in 2012 of the Rochdale sex-trafficking gang, most of whom were British Pakistanis, the historian suggested their values were ‘entrenched in the foothills of the Punjab or wherever it is’.

Earlier in 2011, Mr Starkey angered royalists when he said that the Queen had ‘done and said nothing that anybody will remember’ during her record-breaking 63-year reign, adding that she views her duties as ‘ordinary and humdrum’.

In the past, the writer has embraced his reputation for being rude and abrasive, admitting that he has a tendency towards ‘self-indulgence and explosion and repartee’.

And most recently in 2019 the TV historian claimed Remembrance Sunday has become a ‘crazy religious ritual’ that imposes ‘poppy fascism’ on everyone in Britain.

‘The universities are acting rather like Covid spreaders, these are the super spreaders.’

Mr Starkey sparked anger when he used the phrase ‘so many damn blacks’ during an interview with Brexit campaigner Darren Grimes for YouTube channel Reasoned UK.

He said during the June 30 video: ‘Slavery was not genocide, otherwise there wouldn’t be so many damn blacks in Africa or in Britain, would there?

‘An awful lot of them survived and again there’s no point in arguing against globalisation or Western civilisation.

He added: ‘It is probably the most important moment in human history and it is still with us.’

It sparked a huge backlash, including from former chancellor Sajid Javid, who said Mr Starkey’s ‘racist’ comments were a ‘reminder of the appalling views that still exist’.

Mr Starkey later issued an apology, admitted his ‘bad mistake’ has cost him ‘every distinction and honour acquired in a long career’.

He said his ‘principal regret’ was that his ‘blundering use of language’ could endanger people’s right to freedom of speech.

On the phrase ‘so many damn blacks’, he said: ‘It was intended to emphasise, in hindsight with awful clumsiness, the numbers who survived the horrors of the slave trade.

‘Instead, it came across as a term of racial abuse. This, in the present atmosphere, where passions are high and feelings raw, was deplorably inflammatory.

‘It was a bad mistake. I am very sorry for it and I apologise unreservedly for the offence it caused.

‘I have also paid a heavy price for one offensive word with the loss of every distinction and honour acquired in a long career.

‘Moreover, this misunderstanding of my words in no way reflects my views or practice on race.

‘I have lived and worked happily and without conflict in multicultural London for almost 50 years and I spent much of the podcast discussing bi-culturalism as a key to the success of Britain’s multicultural society.’

Addressing the public reaction to his words, he added: ‘Central also to British history is a tradition of free speech. 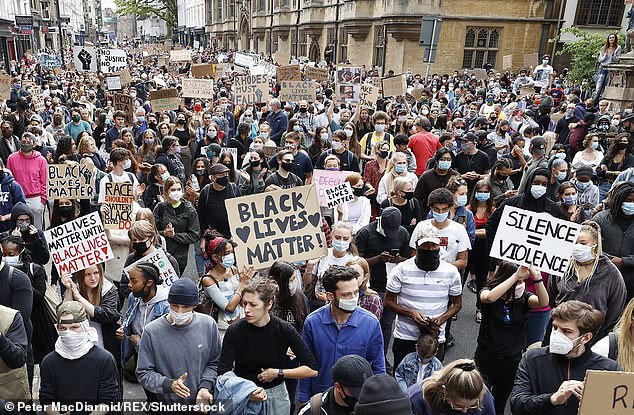 The Tudor historian said BLM (pictured, a march over Cecil Rhodes statue at Oxford University in June) was trying to ‘delegitimise’ Britain’s past, claiming supporters were beginning with a conclusion and adapting the facts to suit it

‘If that tradition is suppressed on questions of race, resentments will fester rather than disappear.

‘My principal regret is that my blundering use of language and the penalty it has incurred will further restrict the opportunities for proper debate.

‘For it is only open debate that will heal the divisions in our society that the Black Lives Matter movement has both exposed and expressed.’