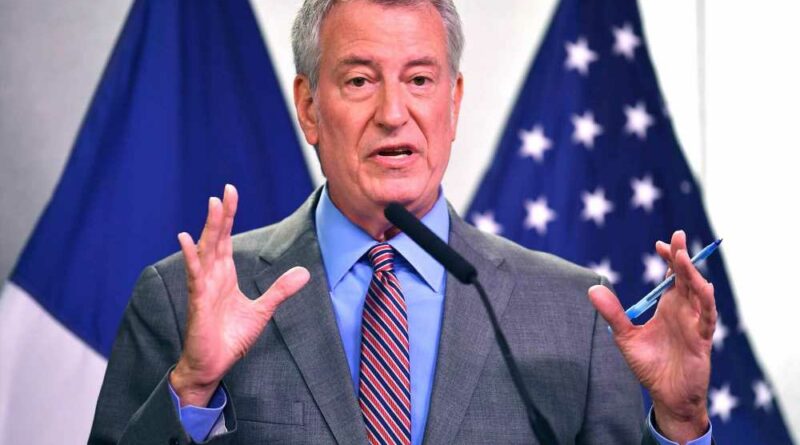 ‘You can start by resigning’: Cuomo accuser calls on Time’s Up CEO to quit

‘He’s a fighter’: Rudy Giuliani says Cuomo will ‘resurrect himself’

Mayor Bill de Blasio tore into his political nemesis, warning Thursday that outgoing Gov. Andrew Cuomo could do more damage before leaving office in disgrace — and urged New Yorkers to remain vigilant until then.

“I think people should keep a very close eye on him after everything he’s done and I don’t know why it needs to be 12 days, honestly,” de Blasio said.

“I think we’re all ready to move on and I think the quicker we can move on, the better, at this point,” he said.

During his first news conference since Cuomo’s stunning resignation Tuesday, de Blasio blamed the disgraced Democrat’s downfall on an insatiable thirst for power, calling it a “cautionary tale for everyone” that’s “almost Shakespearean.”

“In the end, history will judge him harshly because he amassed power in a way that led to bullying and intimidation and threats,” the mayor said.

“The very effort to dominate everything else in his path undermined whatever good there might have been in his plans.”

He added: “You’re not supposed to have one person with that much power and it got the better of him.”

De Blasio also said he was “surprised” that his longtime political enemy finally quit over allegations he sexually harassed 11 women, saying, “I did not respect him to do what I regard as the decent thing and get out of the way.”

When asked if Cuomo should still be impeached to prevent him from again seeking public office, de Blasio said, “I think there has to be accountability, whatever form that takes” and added, “Others need to be held accountable, as well.”

“We still have huge questions on the nursing homes and the [death toll] cover-up, on whether vaccines were given as a political favor, supplies were provided to allies and withheld from those the governor didn’t favor,” he said.

In response to a question from The Post, de Blasio declined to say if he thought top Cuomo aide Melissa DeRosa — who figured prominently in last week’s blockbuster report from state Attorney General Letitia James — should be among those targeted.

“Anyone involved needs to be held accountable, anyone who gave those orders,” he said. “That’s for the investigators and the Legislature to determine.”

De Blasio’s blistering comments came after he interrupted a family vacation in Massachusetts to ostensibly give a briefing on the looming heat emergency.

Also during the news conference at the city Office of Emergency Management headquarters, the lame-duck mayor said he “had a good conversation” on Tuesday with Lt. Gov. Kathy Hochul, who’s poised to become the first woman to lead the Empire State.

De Blasio said they shared the top priority of combating the spread of the Delta variant of the coronavirus.

“We need to do it in a collegial fashion, and, you know, sit down as soon as possible and start the conversation on how to do things right and do them better.”