The bleak forecast comes from scientists who warn that the level of the sea is now falling by as much as 1.5m (5ft) each year.

The biblical wonder of the world has suffered from years of drought and failed policies to try and avert what has been described as an “environmental disaster in slow motion”.

An expanding population across the region means that competition for scarce water resources is greater than ever.

And factories mining minerals by evaporating the water also contribute to this story of destruction.

The once mighty River Jordan – where Jesus was baptised – which feeds the inland sea is but a trickle and the Sea of Galilee is also very low. 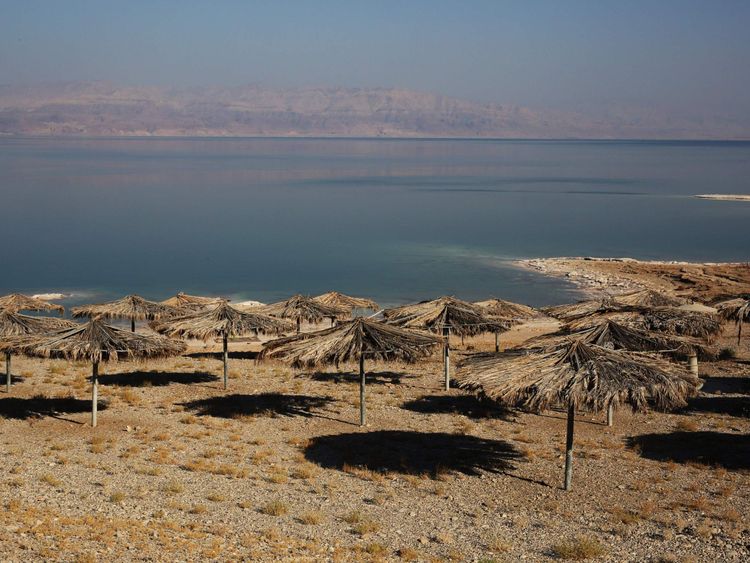 The stricken shoreline reveals cracked and parched earth where the water once lapped between Jordan, the West Bank and Israel.

And the signs of nature’s anger are everywhere.

Sinkholes where the sea has dried up under the hot Middle Eastern sun make much of the area inaccessible.

Some resorts and spas have had to close.

Others, having been built next to the water a few decades ago, have to take the tourists down to the sea by tractor train. It is depressing to see such beauty in a ruined state.

Dr Ofir Katz, an ecologist at the Dead Sea and Arava Science Center, says what is happening is catastrophic, adding: “It’s a lesson to everyone: don’t mess with nature because nature will always win and we will always lose.

“If we keep taking fresh water from nature from the Sea of Galilee, or from the Euphrates for example, or the Nile, we will eventually ruin the local environment.

“We need to take care of nature or else we all sink with it.” The area is major tourist attraction: visitors like to bob in the salty unctuous waters, which are said to have healing properties.

But despite the images of tranquility, the Middle East’s deep conflicts are never far away.

Environmentalist Gidon Bromberg from Eco Peace says if the damage is to be reversed there needs to be greater regional cooperation.

He explained: “The demise of the Dead Sea is a reflection of the unsustainability of our water resources region-wide.

“The demise of the Dead Sea reflects competition over scarce water resources between Israel, Jordan and Syria to the north.

“And the industry on the Israeli and Jordanian side seeking to exploit the minerals of the Dead Sea.”

It is more important than ever to work together to create things like desalination plants, he added.

“Manufacture more water in the Mediterranean, produce renewable energy in the desert areas and create healthy interdependencies amongst us Israelis, Palestinians and Jordanians first. Or we going to see potentially more conflict rising out of these increasingly scarce water resources.”

The Dead Sea is in many ways a gauge of the health of the environment.

Efforts to revive it may help unify the region but equally if they fail it will be a sign that water security will become an even more toxic issue in the future.