Queen of the Sofa! Woman who marched into House of Fraser to carry out her own settee sits on it triumphantly when she appears on This Morning

A defiant woman who marched her dream sofa out of House of Fraser after they refused to honour her order has appeared on TV sat on her beloved settee.

Fiona Boston, 52, bought the ‘sofa of her dreams’ from House of Fraser after years of saving on July 26.

But when the department store went into administration on August 10 she was kept in the dark and told by staff she may not get the £1,500 couch.

Fed up of waiting, she decided to take matters into her own hands on September 1. 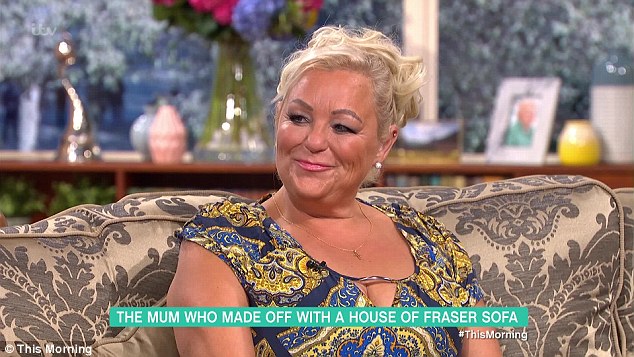 Mrs Boston and five of her relatives went with a van to the Darlington store, walked up to the second floor, dismantled one of the sofas and marched it out of the door.

She was caught by police a mile away. The market trader told officers she hadn’t stolen the furniture and showed them the receipt.

They decided it was a civil dispute and she was allowed to go home.

Today she appeared on This Morning sat on her new sofa with hosts Philip and Holly.

Recalling the dramatic incident she explained her husband Alan, 66, nearly died at Christmas after suffering a brain aneurysm.

She said: ‘My husband nearly snuffed it at Christmas. He’s gone back to work now.

‘He’s a hard grafter and so am I, so we wanted a new sofa for us both to relax on.

‘When Alan went back to work he said to me: ‘I tell you what love I’ll get you that sofa.’ 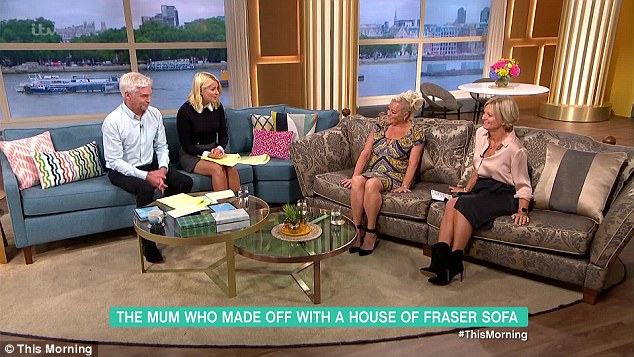 Sitting proudly on the luxury settee, she added: ‘This is my dream sofa. I’m a queen on it. I felt like a movie star.’

Mrs Boston, of Hartburn, County Durham, told how she went into House of Fraser in Darlington several times after they went into administration on August 10, where managers told her they could not guarantee she would get her order.

She said: ‘They were just ignorant. They were just absolute… I was so frustrated because when I’ve gone in to complain and manager was like whats your name, we’ll look into it.  They didn’t know what was going on.’

The couple had already sold their old sofa and were ‘sitting on deck chairs’ in their living room, while they waited for the new one to arrive.

She added: ‘My husband has just had an aneurysm, he’s really poorly and he was at on a deck chair at home.’

Then she described the dramatic sofa snatch, saying: ‘Alan was so weak.

‘So on Saturday I woke up and sat right that’s it. I’m having my sofa today. 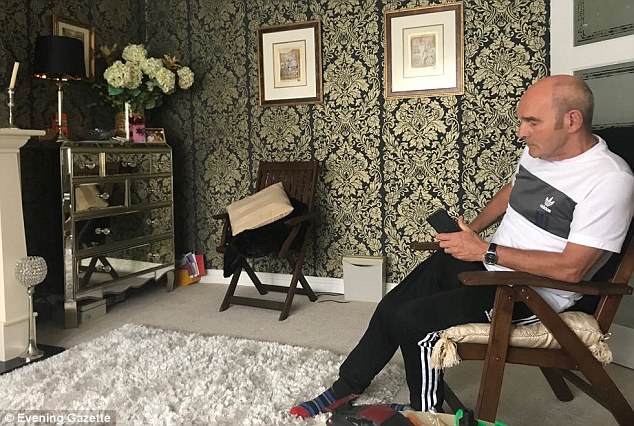 ‘I said to my son in law Keith, can you get a van, sort it out, get the troops and get people involved.

But no one really wants to get involved, they say ‘oh I’ve got a bad back.

‘So in the end there was six of us. When we got to Darlington my daughter filmed it.

‘The furniture section is on the second floor so I got the lift because I’ve got a bad back. We took it apart and walked it out of the door. ‘ 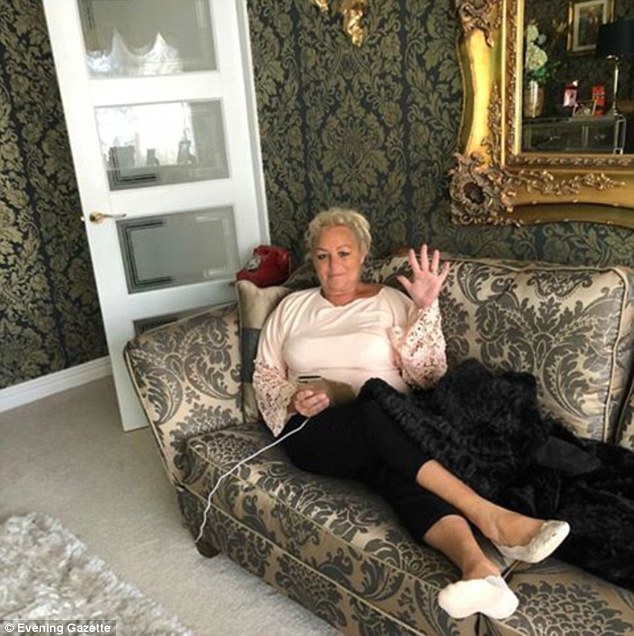 Dramatic footage shows the Boston family taking matters into their own hands that day.

But she said she was only stopped by police a mile away from the shop.

She said: ‘The police stopped me a mile down the road.

‘They swerved in front of Keith (her son in law) in his van and I was behind. And I thought ‘oh bloody hell.’ 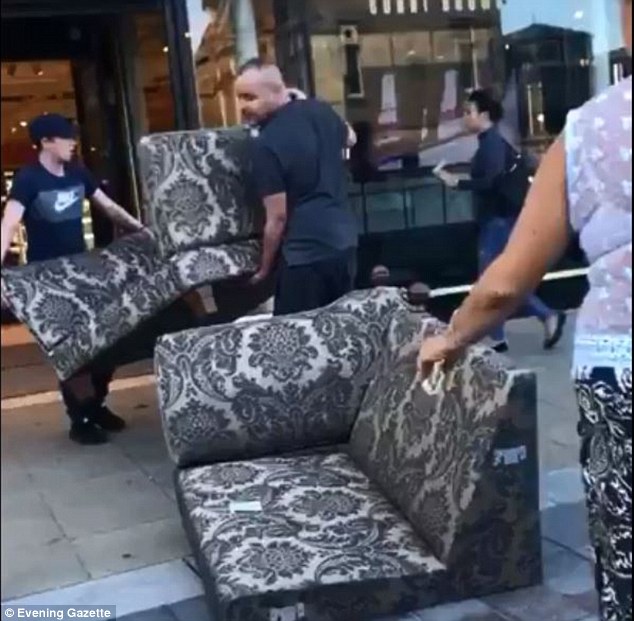 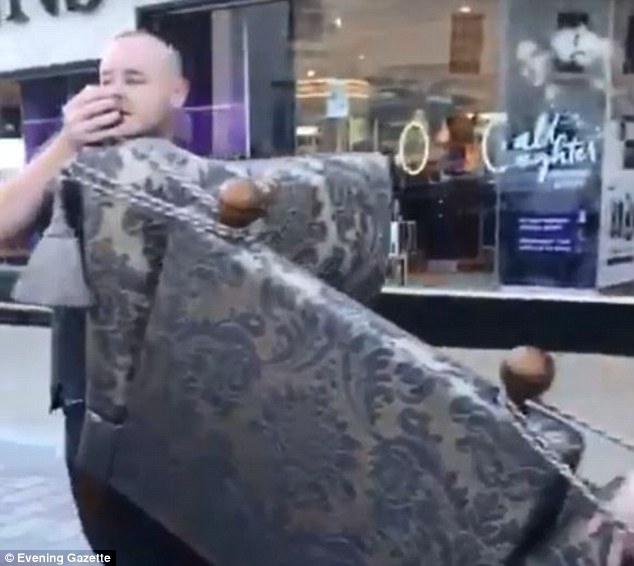 As soon as the sofa was loaded onto the van, staff from the store surrounded the vehicle

‘I said it’s my gig. Don’t talk to anyone else, its me. I told them I haven’t stolen it I’ve got the receipt.’

The police decided it was a civil dispute and let her go.

She explained she is still waiting to heart about the four pairs of £89-for-two cushions and the £716 puff she ordered to go with the sofa.

Commenting on the fiasco, a consumer expert said: ‘I cannot condone what she’s done, but isn’t it fantastic.

‘You shouldn’t just go in and take your goods. That’s looting that’s anarchy.’

MailOnline has contacted House of Fraser management for comment.

Fiona posted details of her endeavours on social media, saying ‘I took what was rightfully mine’

House of Fraser’s stores in Middlesbrough and Darlington were both under threat when the firm went into administration.

However their new owner, Sports Direct’s billionaire founder Mike Ashley, said he would try to keep 80% of the chain’s stores open after he bought the company out of administration.

It was announced last week that both stores would remain open. 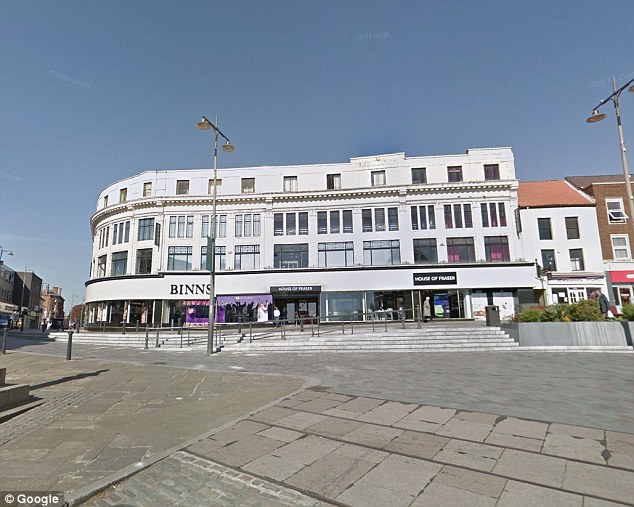 Will you get your money back on items paid for if a firm goes into administration?

If you ordered with a company, and it went into administration before fulfilling it, then whether you get your money back depends on the company’s exact situation, and how far along your order’s got since it was placed.

Yet nothing’s guaranteed, which is why routes such as credit card protection, detailed below, are so important.

If a company’s in administration, it means it can’t provide your goods or services, and the management’s no longer in control. Yet it doesn’t necessarily mean it’s closed down completely.

The administrator’s job’s to maximise the value from selling off the company, and if keeping it as a going concern in order to sell it does that, then it’ll keep trading. That may mean you can simply get a refund, or you receive the product as normal.

Otherwise, to be in with a chance of getting your cash, you’ll have to apply to the administrator, not the company, and any cash left after paying the secured creditors and staff’ll be split between everyone who’s submitted a claim.

If you need to get a refund through the administrators, don’t count on getting all your money back. You may be lucky to get anything. If you do, it’s often just a few pence per pound owed.

2014: Sanpower group, owned by Chinese industrialist Yuan Yafei, buys House of Fraser. The new owner announces big plans to grow the business and expand into China by investing £75million in the business.

2015: House of Fraser posts its fifth straight year of statutory losses as the group suffers hefty charges related to its £300million refinancing, which it had used to fund store refurbishment and improve its buy-and-collect service.

2016: Despite Sanpower’s big expansion plans, by December of this year only one outlet has opened, in Chinese city of Nanjing.

September 2017: House of Fraser gets its first cash injection from its Chinese owner, who finally pumps in £25million.

May 2017: Chief executive Alex Williamson is brought in. He launches a turnaround effort to overhaul House of Fraser’s product range and stores while trimming costs. He says he wants to cut property costs by 30 per cent within five to ten years.

January 2018: The struggling department store says it will close failing stores or reduce the size of others after recording disappointing Christmas sales.

March 2018: Sanpower announces plans to offload 51 per cent of its 89 per cent stake to a mystery Chinese leisure firm called Wuji Wenhua. Meanwhile another suitor appears – Chinese company Fullshare, controlled by billionaire Ji Changqun. However, the company issues a profit warning a fortnight before the deal is expected to be finalised.

April 2018: Accounting giant KPMG is called in to look into possible restructuring plans.

May 2018: The firm draws up proposals for a company voluntary arrangement – an insolvency process that could see it close up to 30 of its 59 stores and negotiate dramatic rent cuts on others. That is the condition to access £70million funding pledged by a second Chinese firm, C.banner, which owns the Hamleys toy shop in London. The Chinese owner of Hamleys, C. Banner, has made access to the funds conditional on a restructuring deal being done.

7 June 2018: The department store goes ahead with the CVA, which will result in the closure of 31 of its 59 stores across the UK and Ireland.