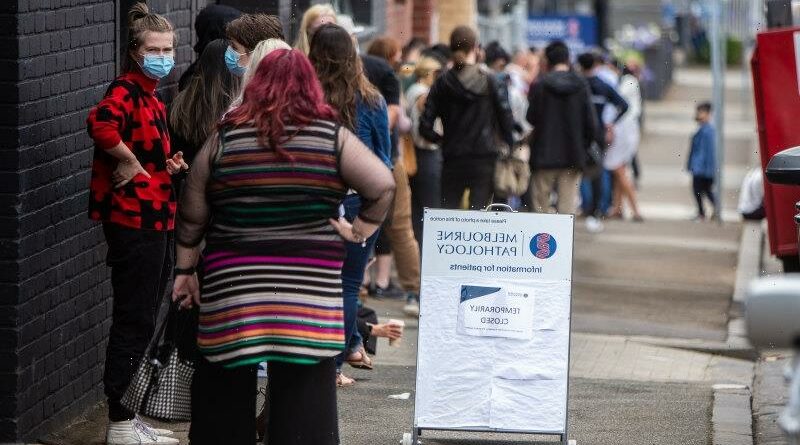 A surge in demand for coronavirus testing due to interstate border arrangements and increasing community transmission is expected to continue in the lead-up to Christmas, with calls for extra sites and extended hours to be introduced to ensure people aren’t turned away.

On Sunday, a number of testing centres in Melbourne – including those at Box Hill Hospital, The Alfred hospital, St Vincent’s Hospital, Peninsula Health in Frankston and the Royal Children’s Hospital – had temporarily closed by midday because they were over capacity. 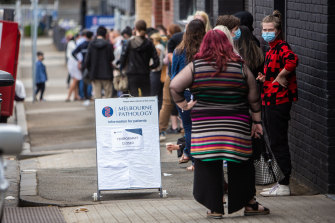 People queue outside the COVID-19 testing site on Alfred Street in North Melbourne on Sunday.Credit:Scott McNaughton

Acting Premier James Merlino said it was “high-demand period” for testing and they were expanding capacity as much as they could.

“I know that there are particular sites where the wait is long but on average, the wait is 45 minutes to an hour or so. So I ask people to be patient, we’re expanding it, extending it as much as we can,” he said.

He also ruled out changing coronavirus settings before Christmas to respond to the fast-spreading Omicron variant, and said crowd numbers at the Boxing Day Test and Australian open would not be reduced.

“I know this is difficult for people and I know that everyone’s concerned about this new variant. But I want to be really clear. We’re not changing our settings.”

Some testing centres had estimated wait times of two-and-a-half hours on Sunday, while others nearby were only 15 minutes. On Friday, more than 88,000 tests were processed in Victoria, the highest daily number since the start of the pandemic, with another 76,033 tests processed on Saturday.

The state government insists the testing system is coping with the extra demand, and have changed opening hours for state-run drive-through testing sites from 8am to 8pm, to 7am to 7pm to account for the morning rush.

Lisa Fitzpatrick, the Victorian branch secretary of the Australian Nursing and Midwifery Federation, said a surge workforce of allied health and nursing, midwifery and medical students had been built by the state government to deal with the increase and was currently being used, but more may need to be done.

“There is a heavy demand on our testing sites with a rise in community transmission coinciding with an increase in testing for people to meet travel requirements. There may be a need to extend hours or increase the number of sites,” she said.

Ms Fitzpatrick said the surge workforce had been created so that the majority of nurses and midwives could return to their health services.

“There’s no capacity to draw more testing staff from our health services because those people are all unselfishly working, despite the need for a break, so they can care for the unvaccinated who continue to require hospitalisation,” she said.

“People will need to accept there will be longer wait times and be patient with staff and each other.” 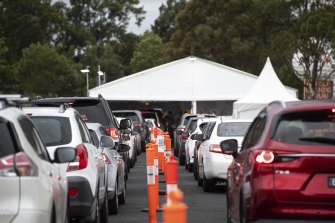 Victoria recorded 1240 new coronavirus cases on Sunday, including five new cases of the Omicron variant. There are now 392 people in hospital with the virus, with 41 on a ventilator.

In NSW, where more than 10,000 people have contracted COVID-19 in the past five days, experts have called for the state government to reintroduce indoor mask-wearing and restrict large indoor events.

In an opinion piece written by John Kaldor and Greg Dore, epidemiologists at the University of NSW’s Kirby Institute, and Professor Sharon Lewin, director of the Doherty Institute, the trio said a two-week pause on big indoor events and return to mask-wearing mandates could avoid tens of thousands of cases in January.

The three infectious disease experts said states should rethink their reopening plans to allow time to get more information about Omicron’s severity and ability to evade vaccines.

Epidemiologist Michael Toole, an associate at Melbourne’s Burnet Institute, said he believed Victoria currently had the right settings in place but that health authorities should reassess in mid-January.

“I think, given what we know now, we have hospitalisations fairly steady – there’s been a little increase – and given that we still do have vaccine mandates, we have indoor masks, I wouldn’t rush in and change anything right now. Certainly don’t ease the restrictions, but there’s no sign they’ll do that in Victoria,” he said.

He said Victoria should be aiming to increase testing numbers, and suggested schools and other local places could be used as pop-up centres.

He said he was not surprised major sporting events were going ahead.

“I wouldn’t go personally, but I’m ultra-cautious … but it’s understandable they are going ahead. I think the Adelaide Test is going pretty well, but they don’t have as many cases as us,” he said.

“The Australian Open will be more tricky because we don’t know how many cases there’s going to be. Last year, they acted pretty quickly, we did have games played in front of an empty stadium, so I think if they continue to be responsive to any clusters, I think it will be safe to go ahead. But if we are hitting 3000 cases a day, you’d have to reconsider.”

“We have to make it possible for Victorians who need to travel and not do that at the cost of people who have either tested positive or who have a rapid antigen positive test,” she said. 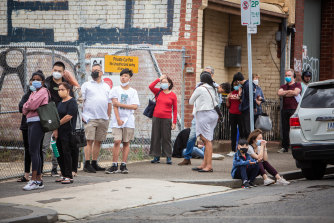 The COVID-19 testing site on Alfred Street in North Melbourne drew a crowd on Sunday.Credit:Scott McNaughton

There are currently a number of requirements for Victorians who are travelling interstate this Christmas, with several states requiring fully vaccinated travellers to have received a negative COVID-19 test result in the 72 hours before arriving.

Opposition health spokeswoman Georgie Crozier said the government should be able to meet the demand.

“For people to be constantly turned away from testing sites again demonstrates the unpreparedness by the government who has had months to respond to COVID and for this reopening,” she said.