President Joe Biden’s massive social safety net package known as Build Back Better sputtered out in December — but pieces of it have shown new signs of life this year.

Experts say a new package could include around $1 trillion in new spending — about half the size of what stalled last year — with a focus on health care costs and energy. These ideas would, of course, require a range of tax increases to fund them. Those taxes would mostly hit business owners and corporations, at least according to the current proposals lawmakers are considering.

“The puzzle that they’re trying to pull together here is how do they align tax provisions that will garner enough support to pass with hitting the revenue target that they’re looking at,” says Garrett Watson, a senior policy analyst at the Tax Foundation.

The relatively more modest-sized ambitions this time around give negotiators “a little more options and flexibility in terms of what types of provisions move forward and which don’t,” he added.

Sam Runyon, Manchin’s communications director, told Yahoo Finance in a written statement that the West Virginia senator insists that any final deal address inflation, health care costs, and domestic energy production. He noted that part of paying for it would be to “ensure everyone is paying their fair share of taxes.” 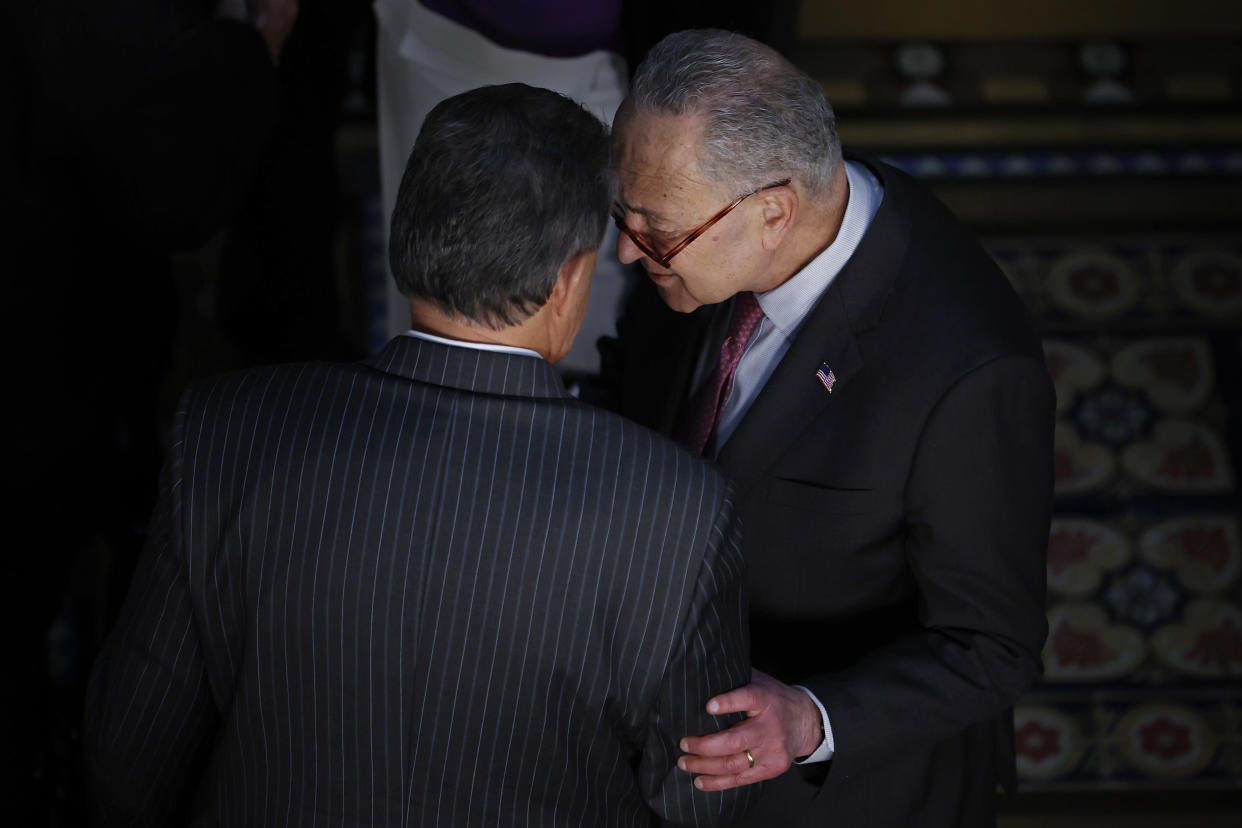 Washington got a peek last week at prescription drug provisions that could be just a first step towards a broader deal in the coming weeks. The effort would be a far cry from many Democrats’ ambitions in 2021; nevertheless, it would represent a key Biden achievement if lawmakers can reach or pass a deal.

The emerging plan, according to multiplereports, largely centers around new taxes on business owners.

The plan’s backers pitch it as a way to close a tax loophole on the richest Americans who report income through so-called “pass-through businesses” — such as sole proprietorships, partnerships, or S-corporations — and avoid some taxes in the process.

The proposal would reportedly expand the current tax on these businesses to apply to active owners who make more than $400,000 annually, levying a 3.8% tax on currently untaxed earnings.

The budget watchdogs over at the Center for a Responsible Federal Budget estimate that broadening this tax could raise over $200 billion over the next decade — substantially shoring up Medicare’s deficit.

The final bill, Watson says, could also include another provision impacting pass-through business: extending provisions expiring in 2025 that limit how many losses active pass-through participants can take.

The Tax Foundation estimates that those two changes together bring in north of $300 billion to the U.S. Treasury over the next decade, potentially paying for a sizable chunk of the total package.

Tax increases directly on rich Americans appear less likely to happen in a revived bill.Watson says taxes on pass-through business owners would hit many of the richest Americans anyway — and be much easier to implement.

Taxing business owners is “more like extending existing tax that folks are familiar with and we already have rules on,” Watson says.

Still, key voter Sen. Kyrsten Sinema (D-AZ) could block tax-hike proposals. Her vote is crucial for passage of any deal, and she has opposed proposals to raise taxes throughout the negotiations.

Representatives for Sinema didn’t respond Monday to a request for comment. 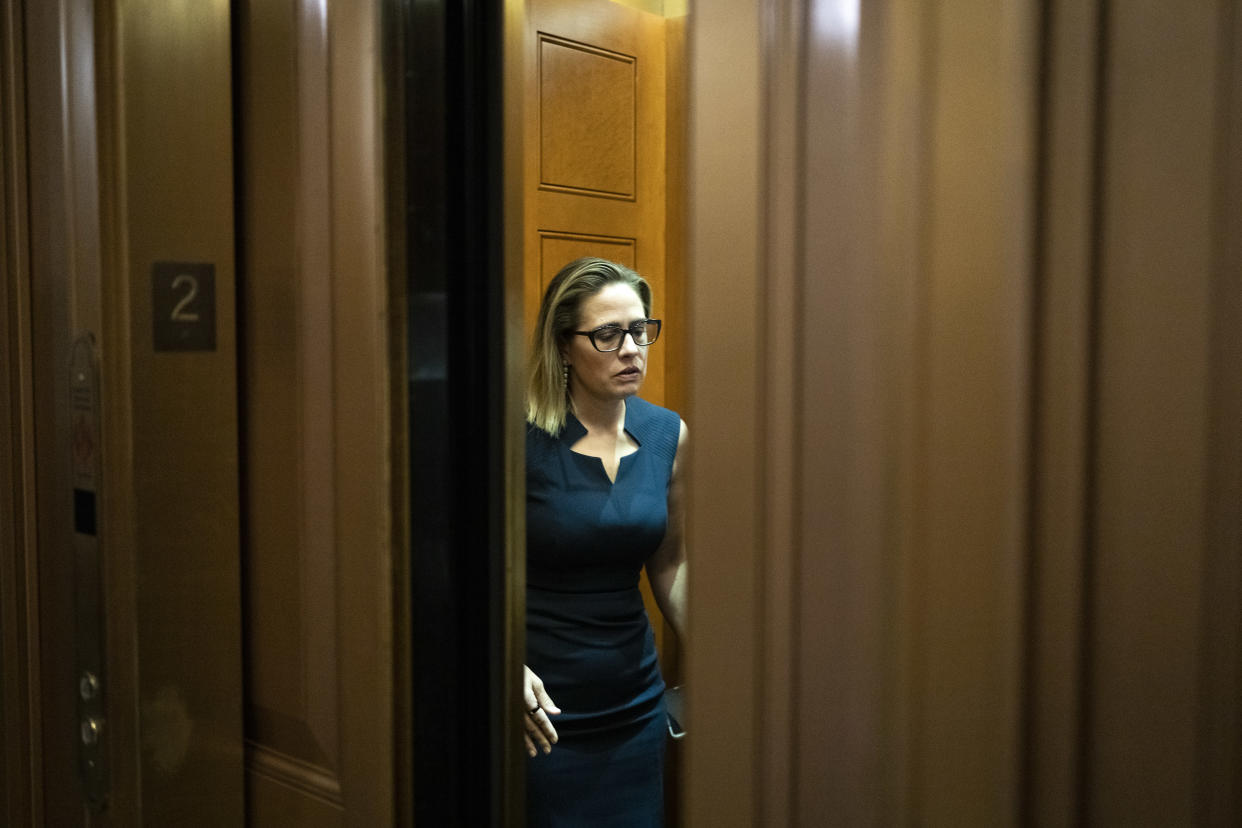 More money for the IRS

Another idea apparently on the table is new money for the Internal Revenue Service for increased tax enforcement. That effort has long been a Democratic priority but was dropped from the Bipartisan Infrastructure Bill last year amid Republican objections.

Republicans have been wary of boosting funding for the IRS, regarding the agency with suspicion after some conservative groups were aggressively scrutinized over their tax-exempt status in recent years. The recent news that two of Donald Trump’s perceived political enemies were selected for a rare audit program has also generated widespread attention in recent days.

Experts have often noted that the U.S. would generate billions of dollars by funding the IRS more fully to catch tax cheats. Biden’s top economic adviser, Brian Deese, called it “a no-brainer” during a Yahoo Finance interview last year.

Other areas of negotiation

Corporate taxes may also be in the spotlight if a deal is finalized.

An idea apparently being floated would change the minimum book tax that corporations pay. Lawmakers are also considering blanket minimum taxes on corporations, as part of a possible a global minimum tax.

Lawmakers are also reportedly discussing what to do about a contentious $10,000 cap on the State and Local Taxes (SALT), which has a disproportionate effect on residents of high-tax blue states.

The talks are expected to continue this week — in spite of a positive COVID test from Sen. Schumer — with Democrats hoping to unveil a complete package in a tight timeline before the end of the month.

Ben Werschkul is a writer and producer for Yahoo Finance in Washington, DC.