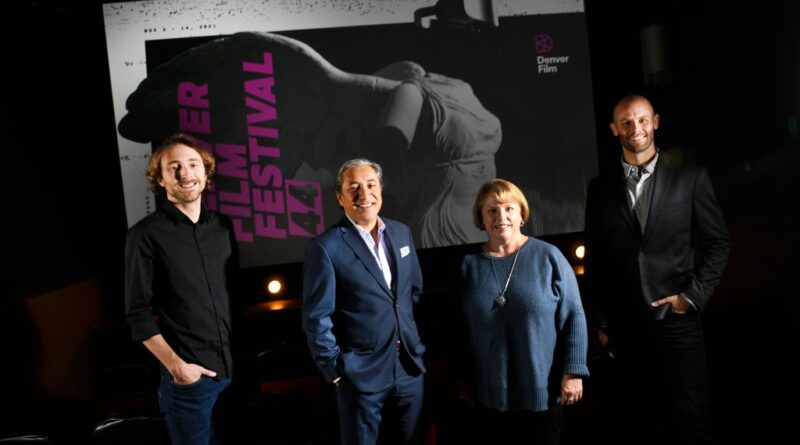 After a fully virtual 2020, Denver Film Festival returns this year with 233 films, plus in-person panels, parties and interactive experiences.

Big titles and Oscar hopefuls such as “Spencer,” starring Kristen Stewart as Princess Diana, will lead the fest, while the Will Smith drama “King Richard” closes it out. Awards for celebrities Jamie Dornan (the “Fifty Shades” series), Annabella Sciorra (“Jungle Fever”) and Clifton Collins Jr. (“Westworld,” “Capote”) and others will round out the festivities.

“This year’s a hybrid festival so our goal would be to maintain our in-person numbers while also growing the virtual screenings,” said artistic director Matt Campbell. “It’s a brand new thing for us so we’re trying to see what kind of audiences we can generate.”

While past fests have attracted anywhere from 50,000 to 60,000 total attendees (i.e., tickets sold), and ticket sales are strong for this year’s event, getting back out there can be intimidating — even for seasoned cinephiles. Here’s a handy guide for this year’s festival.

The 44th Denver Film Festival takes place Wednesday, Nov. 3, through Sunday, Nov. 14. The festival’s hub is undoubtedly the Sie FilmCenter, at 2510 E. Colfax Ave., which is Denver Film’s home base and the site of dozens of screenings. The three-theater building opens 90 minutes before each day’s first screening. The shiny new AMC 9+CO 10 (826 Albion St.) also will host dozens of screenings.

Select screenings also will take place at the Sturm Family Auditorium, in the Freyer-Newman Center at Denver Botanic Gardens (1007 York St.). See a map and hours for each venue at denverfilm.org/denverfilmfestival/dff44/venues.

All venues except for McNichols have attached parking garages, with meters and street parking also available.

Each venue will require attendees to pass a verification check prior to screenings, following Denver Film’s late-September notice that it would require people to be fully vaccinated against COVID-19 with an FDA or WHO-approved vaccine. (“Fully vaccinated” is defined as two weeks after a person’s second dose in a two-dose series and two weeks after a single-dose vaccine, organizers said.).

Children under the age of 12, who are currently ineligible to receive the vaccine, must instead provide proof of a negative COVID-19 PCR test taken within 72 hours of a screening or event start time, according to officials. Each station will be located at or just outside each venue’s entrance. Once inside, all guests ages 2 and up are required to wear a mask indoors, except when actively eating and/or drinking, and regardless of vaccination status. See denverfilm.org/denverfilmfestival/dff44/covid-safety for full details.

Denver Film Festival’s “pre-box office” hours at the Sie will sell tickets through Nov. 2, but organizers are encouraging people to stick to virtual tickets, which will not be printed but instead scanned on smartphones. Tickets also will be available at all venues one hour before the day’s first screening, when available.

Attendees must be in their seats 15 minutes prior to program start time, organizers said. There is no late seating, and no refunds or exchanges will be made.

Tickets are $17 for regular screenings; $11 for weekday matinees (before 5:30 p.m.); $22 for special presentations; $10 for Creative Conversations (filmmaker and other discussions); $45 for opening night, centerpiece and closing night red carpet screening, and $35 for red carpet matinees (all at the Ellie Caulkins Opera House). Opening-night party perks are included with the $75 package. All prices are cheaper for Denver Film members.

Parts of this year’s program and bonus features also will be available to stream on-demand on Denver Film’s virtual cinema platform, run by Eventive. Visit watch.eventive.org/denverfilmfestival for more details.

Tickets for all screenings are available at denverfilm.org/denverfilmfestival/ticketing. Call the box office at 720-381-0813 for more information.

Reading the schedule before buying tickets is a must, but don’t wait too long, as many screenings (especially at the Sie FilmCenter) sell out ahead of time. At this time, group packages are also sold out.

All Red Carpet presentations, pricey though they may be in comparison to regular screenings, look mighty compelling. That includes the aforementioned “Spencer” (Nov. 3); Joaquin Phoenix’s “C’mon C’mon” (Nov. 5); the horse-racing drama “Jockey” (Nov. 11); the “Torn” climbing doc that focuses on the late Alex Lowe and David Bridge (Nov. 13); and closing-night feature “King Richard,” starring Will Smith as the father of a young Venus and Serena Williams.

“Parallel Mothers,” director Pedro Almodóvar’s Spanish-language film about two single, prospective mothers who meet in the hospital as they prepare to give birth and learn a few lessons from each other along the way, stars Penélope Cruz. Other special presentations include the excellent-looking “Memoria” (starring Tilda Swinton); “A Chiara” (Jonas Carpignano’s aching Italian-language drama); and “Who We Are: A Chronicle of Racism in America.”

It’s no surprise that harrowing and disturbing subjects abound. Jamie Boyle’s “Anonymous Sister” tracks the opioid epidemic in Boyle’s own family. Alexandre Phillippe’s “The Taking” scrutinizes the way Hollywood has represented stolen Indigenous lands in Westerns, and Alan Dominguez’s “Document Ed.” presents a meta-documentary of students who are documenting women seeking sanctuary in churches (with a strong local angle).

Most of the programming is broken down into sections, such as CineLatinx, America Indie, Women+Film, CinemaQ, Spotlight on Social Justice, Shorts Packages, Culinary Cinema, late-night and shorts programming, and Italian and U.K./Irish cinema.

As noted, “50 Shades” hunk and legit-great-actor Jamie Dornan will be on hand for the Nov. 10 screening of his latest film, “Belfast,” and to receive the fest’s 2021 Excellence in Acting Award. Annabella Sciorra (“The Sopranos”) will return for a 30th anniversary celebration of Spike Lee’s “Junge Fever” and to receive the fest’s Career Achievement Award. And Clifton Collins Jr. (Google him and you’ll immediately know his face) will receive the John Cassavetes Award.

See the full schedule of appearances and special events at denverfilm.org/denverfilmfestival/dff44.

This year’s event is costing Denver Film more to produce, since its usual in-kind sponsors are unable to provide many of the products and services they have in the past, said James Mejia, CEO of Denver Film, who took the job a little over a year ago. That means Denver Film has had to spend roughly $300,000 more on these formerly donated items compared with its 2019 budget, bringing the total spend for this year’s event to about $1 million.

However, federal, state and local grants and other fundraising have kept the nonprofit organization in good standing, said Mejia, and attendees should expect all the usual features, plus a bigger emphasis on interactive experiences. While Mejia did not disclose the current status of advance ticket sales, he said they’re on track to match 2019’s robust attendance.

“Our biggest sellers so far are the red carpets, but also the Colorado-produced films,” he said. “That’s really heartening as we’re focusing more on connecting with and promoting the Colorado film scene.”