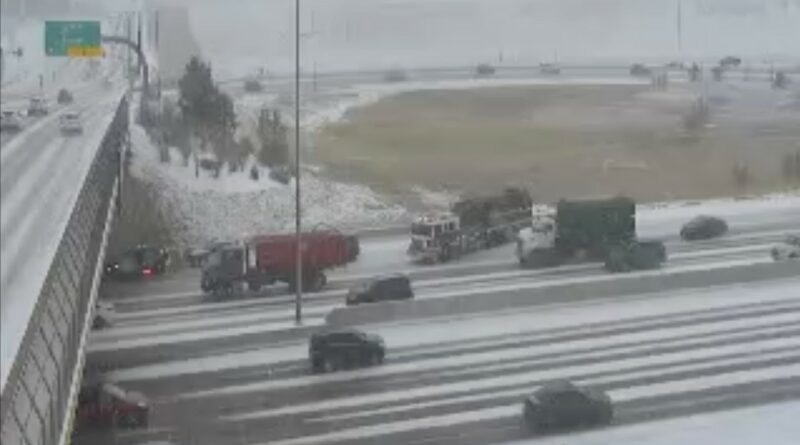 Morning snowfall is just the beginning of Denver’s winter weather Thursday, but the snow is sticking to roads and causing some issues on the morning commute.

Crashes are causing some partial road closures on highways across the city.

Several cities, including Denver, are on crash alerts as road conditions worsen.

9:30 a.m.: Interstate 25 northbound in Castle Rock is reduced to only one lane after a crash between Plum Creek Parkway and Wilcox Street. The CDOT’s website estimates an 18-minute delay due to the crash, and traffic cam video shows standstill traffic on the interstate.

The northbound lanes of Interstate 25 have also all reopened at Lincoln Avenue.

The congestion on 6th Avenue has also let up, and the crash alert has been cleared. Ice is being reported on the roadway on the Colorado Department of Transportation’s website.

9 a.m.: Interstate 270 westbound is reduced to two lanes just before the Interstate 76 junction due to a crash. A second crash has also been reported on Interstate 270 in the area near York Street.

Two northbound lanes of Interstate 25 are closed in Lone Tree at Lincoln Avenue due to a crash.

Sixth Avenue eastbound is at a near standstill at Federal Boulevard due to a reported crash as well, Colorado Department of Transportation traffic video shows.