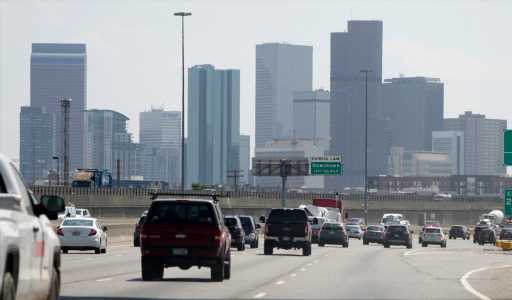 Slow-moving thunderstorms are expected to rumble over the Foothills this afternoon and there’s a chance for severe, stormy weather this evening over the far northeastern plains.
Afternoon thunderstorms over the Foothills will “not be terribly strong,” according to the National Weather Service, but slow-moving storms may “create a limited threat of flash flooding to area burn scars.”

Severe storms to the northeast are expected to hit after 6 p.m., the weather service said.

In Denver there’s a 10% chance of showers and thunderstorms after 3 p.m. as the high temperature hits about 91 degrees under sunny skies.

The metro area is under an ozone action day alert, issued by the Colorado Department of Public Health and Environment, until 4 p.m. Saturday. Ozone concentrations are expected to reach the Unhealthy for sensitive groups category during Saturday afternoon. Boulder, Broomfield, Denver, Jefferson, Larimer, Weld and western Adams and Arapahoe counties are under the alert.

Tonight in Denver there’s a 20% chance for showers and thunderstorms before midnight. Skies will be partly cloudy and the low temperature will be about 61 degrees.

On Sunday in Denver skies will be partly sunny and the high temperature will top out near 92 degrees, according to the weather service forecast. There is a 30% chance for afternoon showers and thunderstorms. Winds could gust to 18 mph.

Through the early part of the week there’s a chance for afternoon and evening thunderstorms, mainly over the mountains, the weather service said. On Monday in Denver skies will be mostly sunny with a high temperature of 90 degrees.