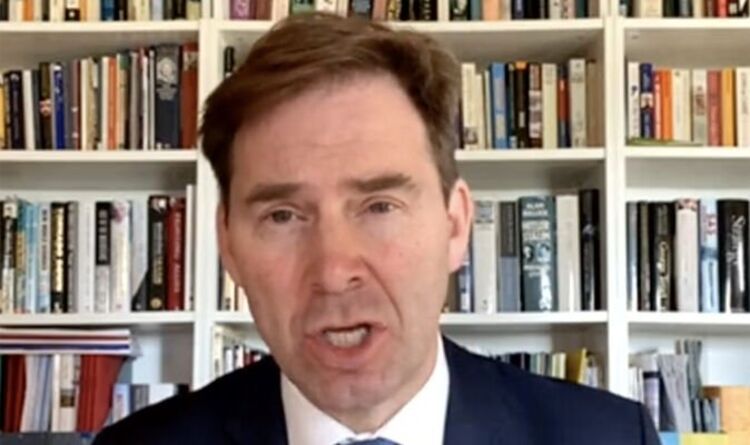 Conservative MP Tobias Ellwood has issued a warning of a terrifying escalation in Russia’s approach to the war in Ukraine. This comes after President Vladimir Putin ordered his military to put the country’s nuclear deterrence forces on high alert in response to “aggressive statements” by NATO countries. Speaking to GB News, Mr Ellwood warned that President Putin could become desperate since he “cannot afford to fail” in his invasion of Ukraine.

The GB News host said: “Plan A hasn’t gone as well as they were hoping and the Putin’s mentality is that Russia doesn’t lose.

“So is the warfare going to get dirty, get bigger, get more aggressive, even get nuclear?”

Mr Ellwood responded: “Yes. We need to brace ourselves for that. We have had incredible results so far with Ukrainians themselves stepping forward.

“They have hampered the Russian timetable. But we need to brace ourselves for an escalation in this war.”

He continued: “My fear is that it’s not beyond Putin to stoop to radical tactics to secure victory, he cannot afford to fail.”

“We need to ask at what point does the international community stop watching from afar?

“As things are moving very fast, we need to ask what is Putin trying to achieve here? Where will he go next if we don’t step in?

“We have entered a dark chapter in European affairs, state on state warfare is returning to Europe again. We haven’t seen that since 1968 in Czechoslovakia.”

Dylan Carter, from Kyiv Independent, echoed this, as he warned that residents in Ukraine were “seeing extremely unorthodox tactics from Russia”.

He said: “The use of saboteurs is really becoming quite extreme.

“There are reports of saboteurs marking buildings with glow in the dark paint to guide Russian planes.

“We have Russian forces try to disguise themselves as civilians to enter Kyiv and sabotage energy infrastructure.”

Defiant Ukrainians rip down Russian flags as Putin’s soldiers retreat [VIDEO]
We don’t want to find out how far Putin thinks he can go [COMMENT]
Not so fast Vladimir! How SWIFT can slow down Putin’s invasion [ANALYSIS]

President Putin’s announcement of putting nuclear forces on high alert has been condemned by the US, who called it a dangerous escalation in the war.

Meanwhile, Boris Johnson met with Ukrainian community leaders in London today as he confirmed that any Ukrainian person settled in the UK will be able to bring immediate family members from Ukraine.

Mr Johnson said: “In the last days the world has witnessed awe-inspiring displays of bravery and heroism from the Ukrainian people in response to those who seek to obliterate their freedom by force.

“The UK will not turn our backs in Ukraine’s hour of need.

“We are providing all the economic and military support we can to help those Ukrainians risking everything to protect their country.”