Home » World News » Despite the heat and record COVID-19 cases, crowds descend on the city to welcome 2022 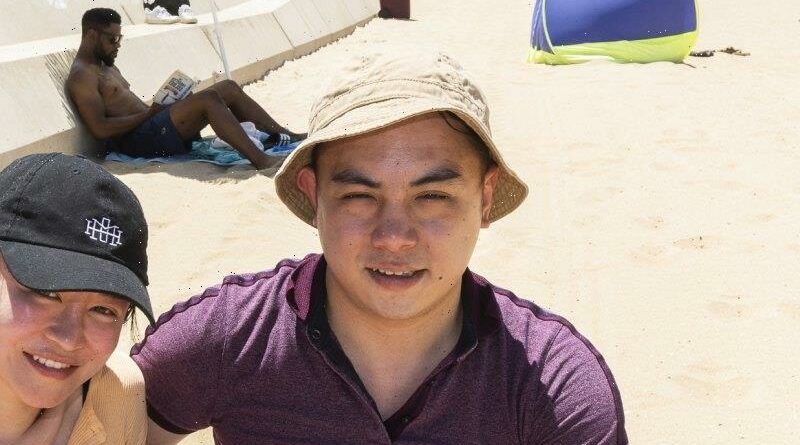 Melbourne’s scorching heat did not dampen the mood of revellers on New Year’s Eve, who eased their way into the city and Docklands once the temperatures started to fall.

Earlier in the day, dozens took to St Kilda Beach to escape the heat, which peaked at 37.7 degrees at about 2.30pm, by lapping up the waves and sheltering under umbrellas that shook in the wind. 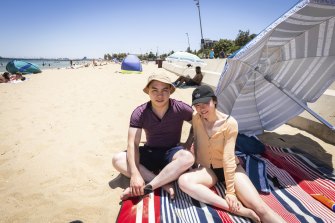 Most were determined to make the end-of-year celebrations as close to normal as possible, while others planned to avoid large crowds and ticketed events out of fear of catching COVID-19.

Oh Boy food truck owner Mounir Mahfouz was hoping the crowds would gather after a slow start to the evening in Docklands.

“They said there’ll be 16,000 people here so we hope for a big night,” he said. “I have to catch up on the days and months we missed out on work because of COVID.” 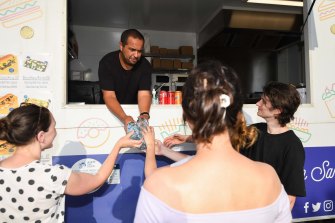 Mr Mahfouz worried some ticketholders would be too scared of catching COVID-19 to come down but hoped the fireworks would bring in a crowd.

“It’s the only site where they are doing fireworks so we are counting on that to bring the crowd,” he said. “For us too. We’ve had a shitty year so it’ll be good to see the fireworks.”

Elsewhere in Docklands, revellers hit the dancefloor to the beat of African music.

Brunswick locals Clara Potter, 7, sister Guinevere, 6, and friend Thea Razentals, 6, were among the first to get into the groove in the COVID-compliant outdoor dance floor.

The trio met at a park playdate during lockdown and will watch fireworks together for the first time tonight.

Clara and Guinevere’s mother, Emily Potter, said they had been preparing the girls by showing them videos of fireworks online.

“They are not quite sure what to expect,” she said. “They’ve had such a rough year at school that we thought come down and have fun.”

Ms Potter said she wasn’t worried about COVID-19 but had been relieved to see the city empty of crowds on their way down to Docklands. 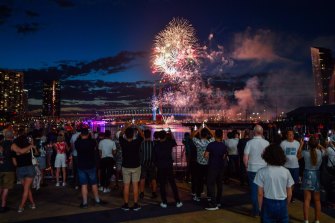 The first fireworks display in Docklands, one of two for the night. Credit:Joe Armao

At 9.30pm the first round of Melbourne’s fireworks lit up the sky from the Docklands as the crowd erupted in cheers.

Children waved glow sticks and wands as the first notes of Avicii’s Good Feeling filled the air. Even security guards dressed in high-vis jackets stopped to watch and film the display.

On the Yarra River the Lady Cutler welcomed revellers aboard for a New Year’s Eve more reminiscent of those past.

Ashour Khouhaba said he was planning a night of dancing and partying before heading home.
“We are very happy to get out of the house and celebrate in this way,” he said. 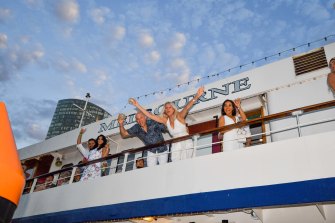 It was all aboard as the Lady Cutler set off from the Docklands. Credit:Joe Armao

“Because of the lockdowns we couldn’t come for a couple of years.”

Mr Khouhaba said he was willing to take his chances with COVID.

“We were just talking in the car, it looks like everyone will get it. It’s either this week or another time.”

On the top deck, revellers donning golden vests and matching hats toasted for a better 2022, their wishes muffled by the tooting of the horn indicating the boat’s imminent departure.

Restaurants jazzed up Melbourne’s laneways to serve their best dishes to revellers on the street as part of the Street Feasts festival, which organisers expected to attract 5000 diners.

The City of Melbourne was forced to cancel the drone swarm, one of its flagship New Year’s Eve shows, on Wednesday due to COVID-related freight and logistics challenges.

The lightning show, by UK-based firm Celestial, was to feature more than 350 drones creating colourful displays in the sky during two seven-minute performances across Victoria Harbour.