CARACAS (Reuters) – Venezuelan state television broadcast on Wednesday a video of captured American Luke Denman, in which he said he was contracted by a Florida security firm to seize control of Caracas’ airport and bring in a plane to fly President Nicolas Maduro to the United States.

Venezuelan authorities on Monday arrested Denman, U.S. citizen Airan Berry, and 11 others in what Maduro has called a failed plot coordinated with Washington to enter the country via the Caribbean coast and oust him.

“Donald Trump is the direct chief of this invasion,” Maduro said during a televised virtual press conference, after the video of Denman was broadcast.

U.S. President Donald Trump has denied involvement. Secretary of State Mike Pompeo said on Wednesday that the U.S. government would use “every tool” to secure the Americans’ return, if they were being held in Venezuela.

A senior Trump administration official said accusations by Maduro and his allies of U.S. involvement “are not credible, and in fact, they are almost comical.”

“The administration remains focused on our policy objectives of achieving a peaceful, democratic transition in Venezuela,” the official said.

In the video, Denman, 34, answered questions from a person off-camera speaking in English. Denman, who looked calm and wore a gray t-shirt, said his mission was to secure the airport and establish outer security. He did not give details on how his group planned to get Maduro on a plane.

It was unclear when or where the video was made, and where Denman and Berry are being held.

Rights groups and opposition leaders in Venezuela routinely accuse the government of extracting false statements from detainees under interrogation by the intelligence services, which have been accused by the United Nations of torture.

In March, the U.S. Department of Justice charged Maduro and a dozen other current and former Venezuelan officials with “narco-terrorism” and the Trump administration offered a reward of $15 million for information leading to his arrest.

“I was helping Venezuelans take back control of their country,” Denman, a former special operations forces member, said in the video.

Denman said he and Berry were contracted by Jordan Goudreau, a U.S. military veteran who leads a Florida-based security company called Silvercorp USA, to train about 50 Venezuelans in Colombia in January for the operation. Goudreau supplied the group with equipment, Denman said.

Goudreau confirmed his role as organizer of the operation in media interviews on Sunday and told Reuters on Monday that Denman and Berry were “my guys.” He could not be immediately reached for comment on Wednesday.

Venezuelan authorities said they arrested the group by the isolated coastal town of Chuao, about 60 kilometers (40 miles) west of Caracas’ airport, after locals raised suspicions. Authorities published photos of what they said was the group’s boat, loaded with ammunition, weapons and communication equipment.

Eight people involved in the same operation were killed on Sunday in La Guaira state, near Caracas, Maduro’s government said.

Maduro had originally said he would show videos of the two Americans, but did not end up showing a video of Berry.

Denman said in the video that Silvercorp had signed a contract with Venezuelan opposition leader Juan Guaido to seek Maduro’s removal. Guaido’s team, in a statement, said they had “no relationship with any company in the security and defense branch,” including Silvercorp. 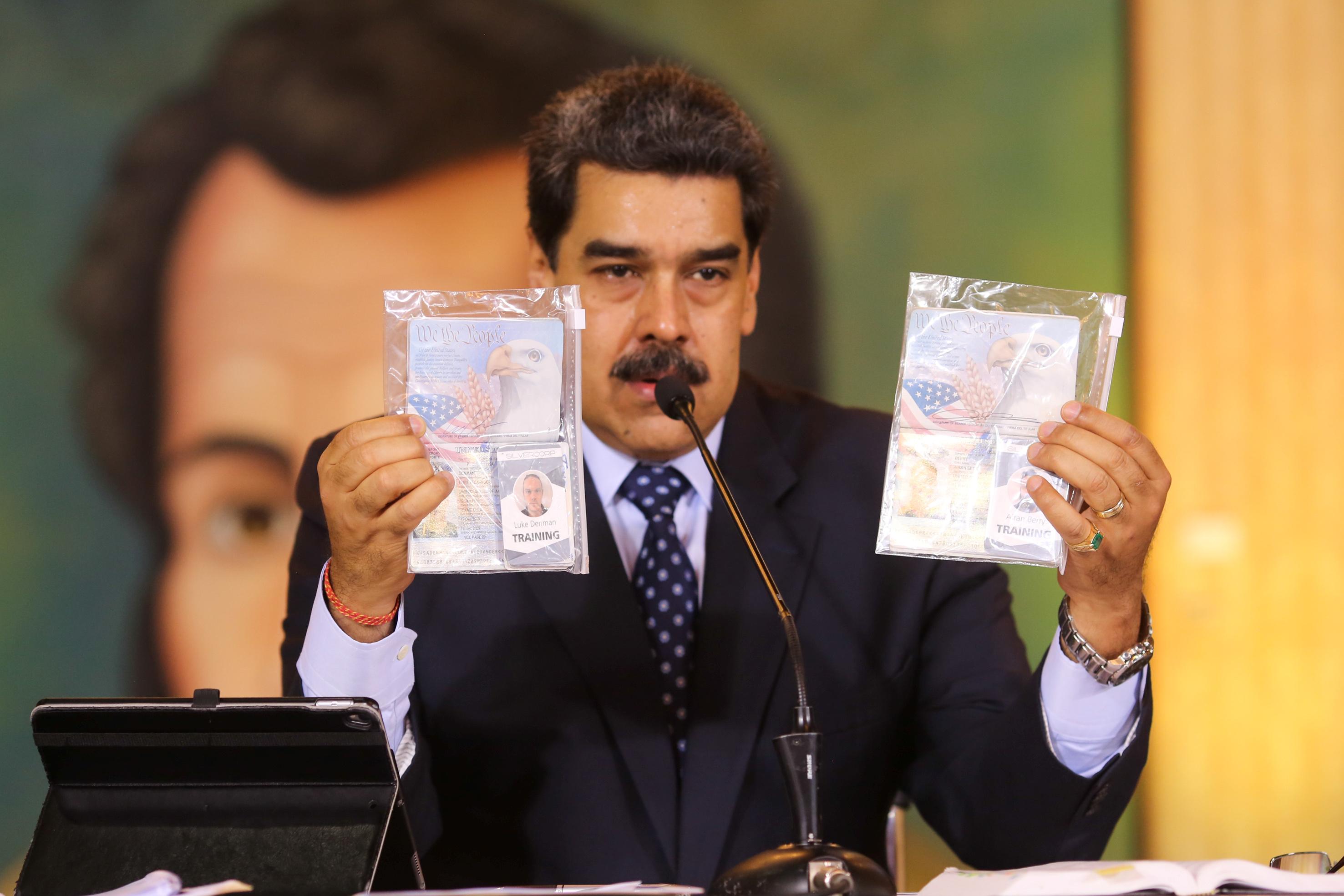 Maduro said that the U.S. Drug Enforcement Administration, via drug cartels, were the “operational and logistical part of this conspiracy.”

A DEA spokeswoman said the DEA had no involvement in the events.

After Denman’s televised statement, a U.S. State Department spokesman said that “due to privacy considerations” it would have no further comment about the two Americans alleged to be in Venezuelan custody.