The shadow home secretary said Mr Corbyn should be judged by ‘what he does’ – despite widespread anger at his failure to tackle the scandal two years after it erupted.

She accused critics of unfairly trying to ‘pin’ the blame on the Labour leader and defended the two-year delay in dealing with Ken Livingstone’s case.

And she defended Mr Corbyn for refusing to agree to demands by Jewish leaders that the party uses the international definition of anti-Semitism – saying this could undermine criticism of Israel. 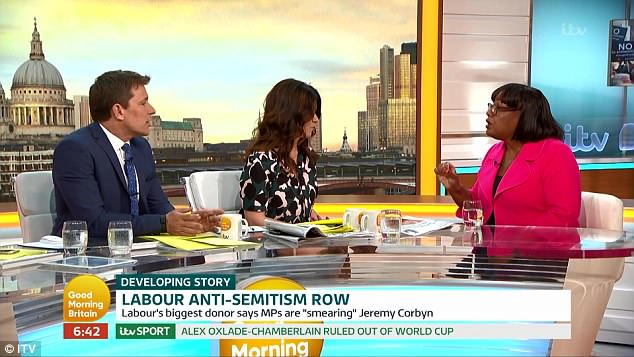 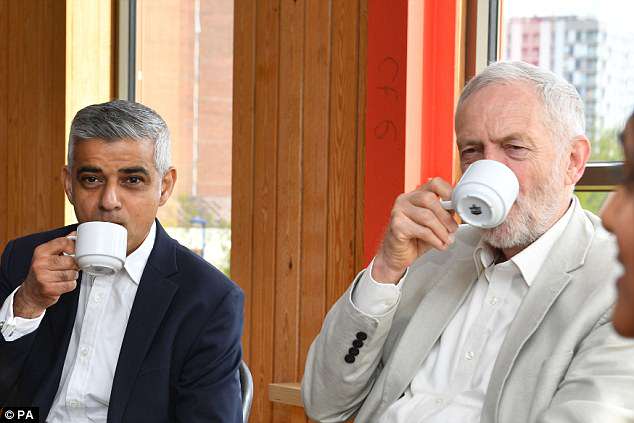 Her attempt to defend Labour’s handling to the scandal comes amid renewed anger at Mr Corbyn over it.

What are the anti-Semitic incidents in Labour that have reached a crisis under Corbyn’s watch?

His long-anticipated meeting with Jewish leaders earlier this week ended with disappointment after he refused to meet any of their requests.

Yesterday 50 Labour MPs and peers escorted their Jewish colleague Ruth Smeeth across Westminster to speak against an allegedly anti-Semitic activist at a hearing so that she would not have to walk the gauntlet of heckling Corbynistas alone.

Speaking on ITV’s Good Morning Britain this morning, Ms Abbott dismissed insulting reports that Mr Corbyn ‘shrugged’ when confronted over the abuse by the Board of Deputies at a meeting earlier this week.

She said: ‘I think anti-Semitism is a cancer and I understand there are different versions of the meeting but the important thing is that we are dealing with the serious cases by the end of July, such as that of Ken Livingstone.

‘You’ve got about 70 or 80 cases. It will be resolved by the end of July. He has to be given due process. I think you will see by the end of the summer is that we are very serious.

‘There’s nothing we can do in 24 hours but by the end of July people will see that we’ve taken action.

She insisted that the delay in dealing with dozens of anti- Semitism cases  was just part of the ‘due process’ – even though many of the remarks at issue were made in public.

Mr Livingstone toured the television and radio studios to repeatedly assert that Hitler ‘supported Zionism’ – and repeatedly refuse to apologise for the comment.

Ms Abbott said: ‘The leadership of the Labour party is not anti-Semitic and Jeremy Corbyn isn’t anti-Semitic.

‘Focusing on Jeremy and trying to pin a label on him doesn’t get to the heart of the matter.

‘You’re going to have to judge Jeremy by what he does. What he actually does. You’re not saying he sits on platforms with anti-Semites are you?’

She suggested that criticism of the leadership is insulting in the  25th anniversary of Stephen Lawrence’s death.

But she backed her leader’s refusal to abide by the international definition of anti-Semitism – saying this would undermine criticism of Israel.

She said: ‘We are concerned with some of the paragraphs that talk about criticism the state of Israel.

‘We don’t want a situation where if you criticise the state of Israel, you will be labelled anti-Semitic.’

Ruth Smeeth (pictured in the black and white dress, along with Jewish Labour peer Alf Dubbs to the left, and Labour MPs Luciana Berger and Jess Philips to her right) was escorted by the Labour politician past a noisy picket of Corbynistas who were chanting their support for Marc Wadsworth

In an incendiary intervention, Mr McCluskey said a ‘small number’ of incidents were being ‘used’ to ‘attack and undermine’ the Labour leader.

He also delivered a dark threat about moves to deselect anti-Corbyn politicians – saying ‘promiscuous critics’ should expect to be ‘held to account’.

But shadow Brexit secretary Sir Keir Starmer said it was ‘obvious’ the party has an issue with anti-Semitism and those who deny it are ‘part of the problem’.