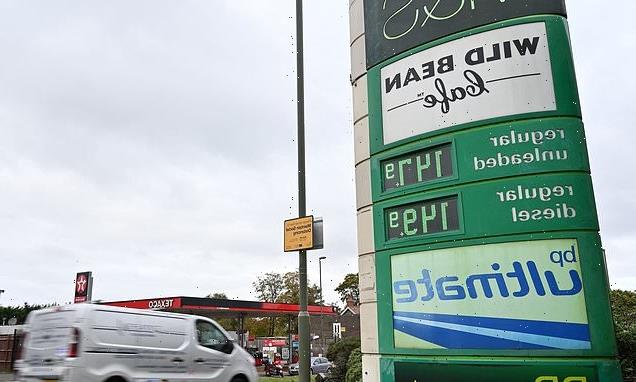 Now diesel reaches record price too: Cost of fuel hits 147.94p a litre – as petrol continues to climb to all-time high of 144.35p

The average price for a litre of diesel was 147.94p on Sunday, according to the RAC, narrowly surpassing the previous high of 147.93p set in April 2012.

It comes just a week after the average price of petrol rose to a new high – rising beyond the previous record also set in April 2012.

Since then, though, petrol prices have continued to rise and peaked at 144.35p per litre on Sunday.

The average cost of diesel has increased by 30p a litre over the past 12 months, making it £16 more expensive to fill up a typical 55-litre family car. 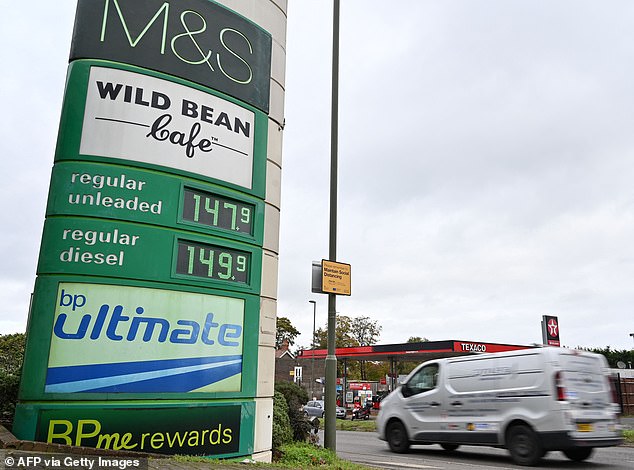 A sign outside a BP petrol station in the Surrey village of Lower Kingswood. Average diesel prices at UK forecourts have reached a new record high

The price rise has been attributed to the cost of oil doubling over the same period, the RAC said.

The introduction of E10, a new petrol blend which contains less carbon, is believed to have had an impact, too.

The margin retailers are taking on every litre sold is also greater than it was prior to the start of the pandemic, putting further upward pressure on prices.

The RAC warned the price will be felt by the UK’s 12.5 million diesel car drivers, along with rising costs to businesses.

Chancellor Rishi Sunak was praised by motoring groups at his Budget last week after announcing the planned fuel duty rise will be cancelled.

He described it as ‘some relief for hard pressed drivers’.

The Chancellor’s decision to keep it frozen at 57.95p a litre for petrol and diesel, as it has been for the last 11 years, came after intense lobbying from Conservative MPs.

That was despite Prime Minister Boris Johnson scrambling to get world leaders to commit to climate change targets at the Cop26 summit in Glasgow.

Britain currently has 4.5m vans and 525,000 heavy goods vehicles, the vast majority of which also run on diesel.

RAC fuel spokesperson Simon Williams said increasing costs would have a ‘knock-on effect’ on prices for goods and services.

He added: ‘While this isn’t unexpected, as petrol has already hit a new record price, it’s still another body blow to drivers and businesses across the country who were already struggling to cope with rising prices.

‘As well as hitting household budgets this will have a knock-on effect on the price we pay for goods and services, as diesel is very much the fuel of business and, as such, will contribute further to inflation.’

The RAC’s figures are based on data provided by Experian Catalist.