Former NSW Liberal MP Daryl Maguire hosted a posse of business associates at a 2017 re-election fundraiser at Parliament House that was attended by Premier Gladys Berejiklian and Treasurer Dominic Perrottet.

Mr Maguire, then the member for Wagga Wagga, had a lot more than his own re-election riding on the dinner, which raised $13,000: the sale of a $330 million land parcel near the Western Sydney airport, owned by the Waterhouse racing dynasty. 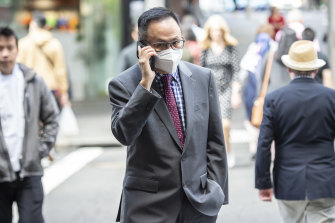 Property broker William Luong told ICAC he had worked with Daryl Maguire on an attempted sale of land owned by the Waterhouse family.Credit:Wolter Peeters

High among Mr Maguire's guest list was Louise Raedler Waterhouse and her property broker William Luong, who arrived early to use Mr Maguire's parliamentary office for a private meeting, before posing for pictures with the Premier.

A corruption inquiry on Thursday heard the dinner was a critical meeting for Mr Maguire and Mr Luong, who were quietly working together to secure the sale of the Waterhouse's western Sydney land to Chinese property developer Country Garden.

At its highest, the sale was hoped to net Mr Luong a brokering commission between $6.9 and 9.9 million, of which Mr Maguire would secure around ten per cent.

The ICAC is now investigating whether Mr Maguire misused his position as a member of parliament for his own financial benefit and a company he silently directed, G8wayinternational Pty Ltd.

Mr Luong told the commission on Thursday he had been introduced to Ms Raedler Waterhouse by Mr Maguire at a dinner for three at Chinatown's Marigold restaurant in 2017.

At the time, the Waterhouse family was considering developing the land under the "SmartWest.Sydney proposal," which came before the Greater Sydney Commission. Mr Luong advised the family that the technology park development would be too costly and instead they should sell "the whole lot". 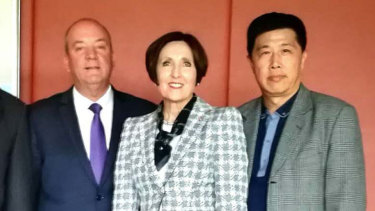 Then-MP Daryl Maguire, Louise Raedler Waterhouse and Ho Yuen Li, a business associate of Mr Maguire who has given evidence at ICAC.Credit:ICAC

Counsel assisting the commission Scott Robertson said the former MP agreed to "grease the wheels" for Ms Waterhouse and Mr Luong by agreeing to help iron out road and zoning issues.

In one intercepted phone call in November 2017, Mr Maguire told Mr Luong, "I’ve introduced Louise to
people to fix the road… I’ll talk to you about it offline."

In another call he said he had spoken to Roads and Maritime Services "to try and move her road," describing RMS as "a pack of bastards, I tell ya, unbelievable."

Mr Luong told the commission the land sale, which never eventuated, was plagued by zoning issues that turned Country Garden off the purchase.

He estimated the land value off the back of a $500 million land sale close by, linked to property developer Ron Medich, with whom he spent "a few months."

Medich is serving a minimum 29-year sentence after he was found guilty of the 2009 murder of business rival Michael McGurk. He is appealing the decision, claiming an error in evidence and miscarriages of justice. 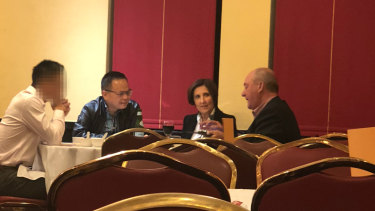 "We were trying to sell based on that value [of the Medich property]," Mr Luong said. "But I had been telling Louise, you can't get that because that land is better… your land is under a flight path… your land isn't worth that much."

When the Country Garden sale began stalling in the second half of 2017, Mr Maguire called on Mr Luong to present a new Japanese investor to get the Chinese developer over the line, the commission heard.

In a phone call to Mr Luong, he said, "You just say that Daryl said he went to dinner, right, with the Consul-General…And they’re jumping all over, um, what do you call it, Badgerys Creek…[saying] we want a piece of it."

In another call he told Mr Luong that Country Garden were being risk averse because "they’ve never got their testicles out, put them on a razor blade and then worried about an earthquake."

By late-December Mr Maguire arranged a meeting between Ms Waterhouse and the Greater Sydney Commission "for her roads." But Mr Luong told ICAC the issue was never the roads, but the need for residential zoning.

Former head of investment at Country Garden Tim Lakos and former chief executive of the Greater Sydney Commission Sarah Hill will both give evidence at the commission on Friday. Ms Waterhouse will also appear as a witness next week.

Mr Maguire allegedly made a last-ditch attempt to keep the deal alive in April 2018 at a reunion dinner with Mr Luong and Ms Waterhouse at the Marigold restaurant, but it was to no avail.

Reflecting on the original proposal to sell the land for hundreds of millions of dollars, Mr Luong said, "the seller always has a dream. I don't think that land has been sold now. I think no one wants it."

As he completed his examination, Mr Robertson asked Mr Luong when he last spoke to Mr Maguire and whether the former MP had offered any advice about what he should say to the commission.

"I think he said, delete all the WeChat messages… I think. I'm not quite sure," Mr Luong said, reaching for his phone from his pocket to "check".

The hearing ended with Commissioner Ruth McColl directing Mr Luong to hand over his phone to the commission as sat in the witness box.

Spokespeople for both the Premier and the Treasurer said they regularly attend Liberal Party functions and are not required to disclose them in their ministerial diary.

The most important news, analysis and insights delivered to your inbox at the start and end of each day. Sign up to The Sydney Morning Herald’s newsletter here, to The Age’s newsletter here and Brisbane Times‘ here.