Home » World News » ‘Disneyland’ in Geraldton: The castle in the sky meant to put Australian town on world map

Singapore: For years, Singaporean developer Jerome Tan would escort groups to Geraldton to show them his slab of land on the eastern fringe of the coastal town 424 kilometres north of Perth.

He had big plans for his 335 hectares, spruiking an ambitious vision to local government and investors that would put the small, remote city in Western Australia on the world map to attract thousands of holidaymakers from China, south-east Asia and elsewhere. 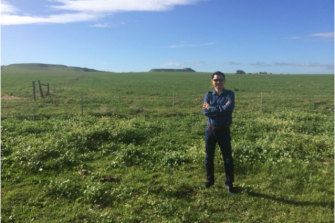 Jerome Tan on the land on the outskirts of Geraldton. He told investors he wanted to build a Disneyland-style theme park on his plot.

“He presented us plans for a theme park, something like Disneyland, that kind of concept,” said Jochen Siepmann, a training manager in Singapore who invested in Tan’s project.

“The grand idea, which he allegedly got the OK [for] from the authorities, was they wanted to upgrade Geraldton to an international airport so that people from China and south-east Asia could fly to Geraldton directly and not even have to go to Perth. This would bring up the land price.”

Tan also flagged an ambition to build a China Town on the property, including hotels and an international school, and was seeking to raise $50 million from loans and sales in Singapore to finance it all.

“I have a big goal and that is to create the second Gold Coast of Australia,” he told Singapore radio station Money FM in 2018.

Three years later, however, the land remains vacant, Tan has not been heard from in Geraldton since 2019 and investors in Singapore are worried they might have lost an estimated $5 million sunk into the scheme. 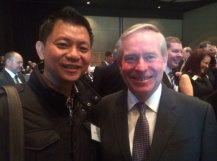 Tan pictured with then WA Premier Colin Barnett in a 2014 photo he showed to investors.

Siepmann is one of about 200 Singaporeans who invested in Tan and his company PIP Holdings. 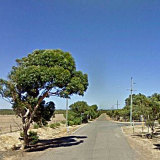 The outskirts of Geraldton, where a theme park was envisaged. Credit:Google Earth

In documents Tan showed to would-be investors he called the Geraldton venture the “The Godfather Deal” and boasted of his connections to state and local government officials in WA. Included in the pitch was a photograph of him with then-Premier Colin Barnett during a visit to Parliament House in Perth in 2014; the business cards of council executives at the City of Greater Geraldton and a short email chain with them raising the idea of a theme park.

“We met you last month at your office in Geraldton and discuss [sic] about the possibility of bringing Disneyland to Geraldton,” Tan wrote to then Geraldton council chief executive Ken Diehm in an email on May 7, 2014.

He told prospective investors they could either buy a plot of land or lend him the cash, saying they would receive their money back with 5 per cent interest after three years if they loaned him $100,000 or more or with 4 per cent interest if the figure was less than $100,000.

Investing in Geraldton’s “Disneyland” would also get them a VIP seat at a performance of motivational speaker Tony Robbins in Singapore.

Tan had been bankrupted in 1999, he told the Singapore radio program in 2018. “I lost all my money in the Asian financial crisis,” he said.

But he had bounced back to his feet, even penning a book – From Bankruptcy To Multi-Millions In 7 Years – in which he offered advice to get rich. “You just have to think how to find the money,” he said. 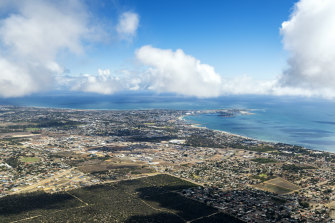 Clearly a fine salesman, he convinced investors to hand him as much as $300,000 into his Geraldton project in some cases.

Tan, who has not returned calls, a text and an email from The Sydney Morning Herald and The Age, has blamed the pandemic for the project coming unstuck. “I want to apologise to some of you, your investment. We don’t have the cash at this point in time to pay back to you,” he said in a four-minute video message to investors posted on YouTube.

He said he was looking for a buyer to take the Australian plot of land off him, adding: “I’m not using your money to buy a Lamborghini for myself, right. Money has been used to pay for the properties so I do not know how that can be a criminal case.

“Some of you call me a scammer. I wish I was a scammer. If I’m a scammer, now I would probably be on one of the Caribbean islands drinking my cocktail on the beach.”

Siepmann said he has not heard from Tan since nor had a reply to a letter his lawyer sent in September. He says he is one of the lucky ones in that he loaned Tan only the bare minimum of $10,000 seven years ago.

In the meantime Tan has been placed back on the bankruptcy register. According to the Singapore Ministry of Law Insolvency Office website he was declared an undischarged bankrupt on October 28 following an application by Singapore-based bank OCBC. 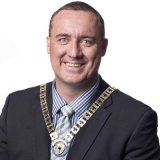 His company, PIP Holdings, was in July listed publicly on the Monetary Authority of Singapore’s Investor Alert List. According to the MAS, it is “a list of unregulated persons who, based on information received by MAS, may have been wrongly perceived as being licensed or regulated by MAS”.

Back in Geraldton, meanwhile, life is going on without Tan’s rollercoasters and river runs.

The city of 32,000, 4½ hours by road north of Perth, does have an airfield capable of receiving commercial and cargo planes from overseas, but there are no plans to establish it as an international airport.

“Jerome always spoke of doing a Chinatown, with an international school development and residential housing surrounding it. On occasion, he would reference a theme park. But to my knowledge, I was never aware of it being a Disneyland,” he said.

Van Styn makes no secret that the council backed Tan’s idea and was “incredibly open to foreign investment” but said it was “always an extremely ambitious project”.

“We always treated it as such” he said. “It’s unlikely that we’ll see any progress on that site in the foreseeable future.”