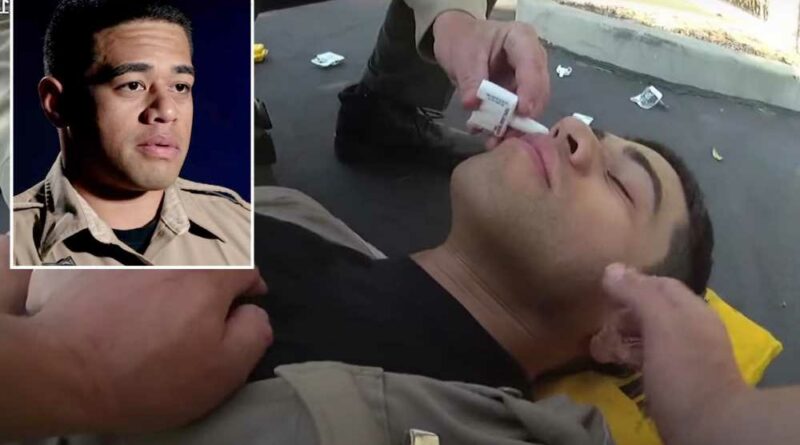 Coast Guard seizes $1.4B in illegal cocaine, marijuana on way to US

Heart-stopping footage shows a rookie deputy in California examining fentanyl during a drug bust — then keeling over and almost dying from an overdose just from being “too close” to it.

San Diego sheriff’s Deputy David Faiivae was shown examining the white powder in a car last month, with his training officer, Corporal Scott Crane, telling him, “That stuff’s no joke, it is super dangerous,” according to a video put out by police as a warning.

As Crane tells him he is “too close,” Faiivae suddenly stiffens up — and collapses on the ground, the bodycam footage released Thursday shows.

“He was ODing,” Crane recalled later, with the footage showing the trainee lying rigid on the ground from the accidental exposure.

“I got you, OK? I’m not gonna let you die,” Crane tells him, putting Narcan in both of the officer’s nostrils to try to reverse the effects of the synthetic opioid that can be 100 times more potent than morphine.

“I’m not gonna let you die,” he repeated, desperately telling his trainee to “breathe, buddy, breathe!”

“I’m trying not to let him go — I wanted him to know he wasn’t alone,” Crane said later, his voice cracking with emotion.

While the department did not detail exactly how the officer is thought to have been exposed, fentanyl can be released into the air as fine particles, which can be deadly if inhaled, according to the Centers for Disease Control and Prevention.

Faiivae got emotional as he recalled how it all happened “in an instant.”

The clip shows an ambulance crew arriving and loading Faiivae on a gurney — when his “eyes rolled back in his head, and he started to OD again,” Crane recalled. “And was ODing the whole way to the hospital.”

While Faiivae has since recovered, the department released the distressing footage to highlight how fentanyl can be “an invisible killer,” as Crane put it.

“He would have died in that parking lot if alone,” he said of his partner.

The department’s warning video ended with the saved officer saying, “I’m Deputy David Faiivae, and I almost died of a fentanyl overdose.”

“Please take the time to share this video,” said Sheriff Bill Gore, calling the drug an ever-growing menace. “It might save the life of your son, daughter, friend or loved one.”