DJ, 21, was arrested after taunting police on Twitter saying ‘the show must go on’ after force threatened to shut down illegal rave, court hears

A DJ has pleaded guilty to causing a public nuisance after admitting to police he performed at an illegal lockdown rave.

Jesse Idehen, 21, taunted Greater Manchester Police on twitter, saying ‘the show must go on’, when the force announced it was going to stop a planned rave going ahead on July 4.

Police went to the college student’s home in Moston and arrested him. He appeared at Manchester Magistrates’ court on Tuesday.

Officers discovered he had nothing to do with the planned July 4 event, but under questioning Idehen revealed he performed at an earlier illegal rave on Broadhurst playing fields in Moston on May 31. 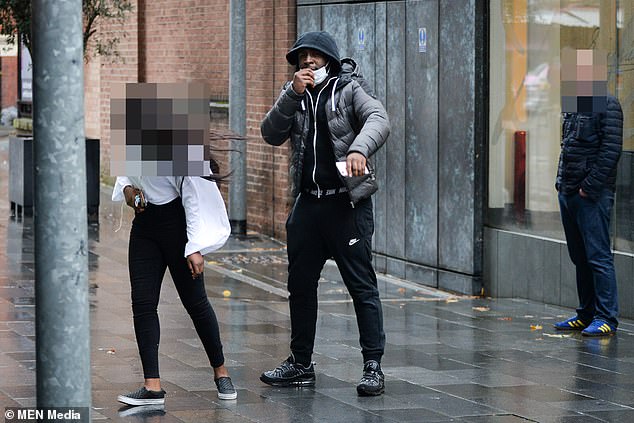 Jesse Idehen (pictured outside Manchester Magistrates Court), 21, taunted Greater Manchester Police on twitter, saying ‘the show must go on’, when the force announced it was going to stop a planned rave going ahead on July 4

Cathy Allen, prosecuting, said the rave took place ‘during the height of the covid lockdown’ and was attended by ‘hundreds and hundreds of people’.

She said: ‘It was so big that there were a number of complaints and police attended, but it was too big for them to deal with.’

Ms Allen said Idehen ‘played music and in his own words gave a few shout outs’ during the party.

Gavin Clarke, defending, said Idehen was ‘in no way shape or form involved in the organisation or promotion’ of either the May 31 event or the planned July 4 rave.

He added: ‘Police were looking at a huge organised event that was taking place on July 4.

‘Police tweeted that they were aware of this event and that it wasn’t going to happen. 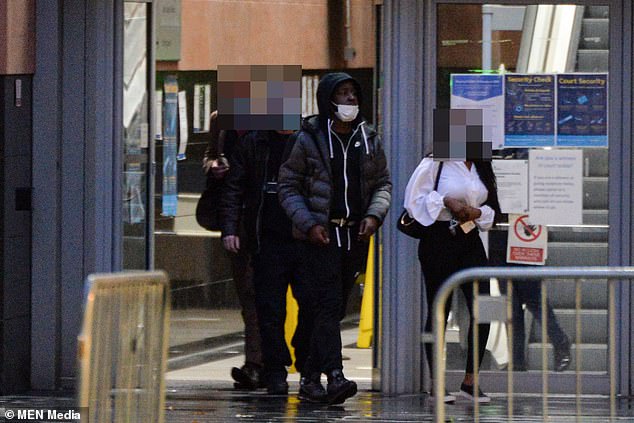 Police went to the college student’s home in Moston and arrested Idehen (pictured outside court). He appeared at Manchester Magistrates’ court on Tuesday

‘Mr Idehen tweeted back “The show must go on” or words to that effect. It was quite tongue in cheek.

‘Police go to knock on his door. That combined with the fact Mr Idehen is a legitimate DJ led to him being arrested.’

Mr Clarke said Idehen was playing football on the fields, which are close to his home, in the afternoon when he spoke to a person setting up a barbecue and DJ equipment.

‘Things then started to snowball. People start Snapchatting and more and more people start arriving. It went from a few people to in excess of 100,’ he added. ‘This admission is all off his own back.

‘He accepts that a couple of times he DJed for a couple of minutes to give the main DJs a break.

‘The following morning he returned to help clear up.

‘He accepts that this was exacerbated by the fact gatherings were being discouraged at this time.

‘I am sure he wishes that he had walked away.’

The case was adjourned for sentencing on December 10.