Residents across Kurnell are facing health concerns after a fuel spill during heavy rainfall this month that left a “petrol smell” lingering over the suburb in Sydney’s south for more than a week.

Ampol has estimated over 700 tonnes of “oily water” was washed over the suburb after a refinery retention pit overflowed due to the heavy rain on April 7. 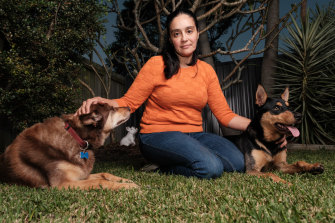 Carla Pennini is concerned for her dogs after suffering from burning eyes, a sore throat and nausea following the residue spill. Credit:Oscar Colman

Some residents have been forced to temporarily relocate from their homes and are even considering moving, saying the long-term effects of the spill are “unknown”.

In the days following the spill, residents began reporting on social media they were suffering from itchy eyes, scratchy throats, nausea and headaches.

NSW Health told the Herald they are aware of the residents’ concerns and said they were working with the Environment Protection Authority to “provide advice to local residents on any potential health risks”.

Carla Pennini, 50, who has lived in Kurnell since 2004, said she desperately called the state poisons helpline the night after the overflow when she experienced a “burning” throat and nausea. 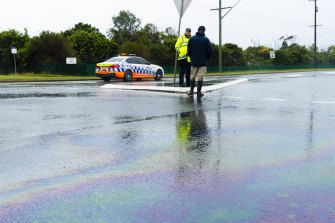 “I don’t get itchy eyes or headaches. I just had a rip-roaring headache, and a cough and I couldn’t sleep. It wasn’t like a cold, more like a burn,” she said.

After her symptoms persisted for days, Pennini and her husband began to discuss selling their home, in fear house prices will shortly crash in the area.

“Prices surely will drop, and we are just thinking do we sell now?” she said.

Pennini is also concerned after a number of residents reported on social media that their dogs were also suffering from major skin issues after the spill. 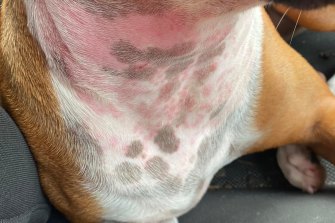 The rash suffered by Bradley-Azizi’s dog.

Kurnell resident Breana Bradley-Azizi said her English staffy had walked through floodwater following the spill on Thursday before breaking out into a major rash on Friday evening.

“It is getting better, but the process for that is to wash her twice a week with medicated shampoo and put lots of creams and sprays on to help it get better and stay clean,” she said.

“If it doesn’t fully go away in the next week or so we will have to take her to the vet and look for better solutions for her.”

The health concerns were raised in a “heated” community meeting with Ampol representatives on Wednesday night.

Kurnell Residents’ Association secretary Jessica Thorne said the meeting was “emotive” and said locals failed to get an answer as to who would be the point of contact for their health concerns.

“Families are being displaced,” she said. “There was definitely an element of shock there [from Ampol], but no one got answers. For many people, this [Easter] is not a good time. They don’t know what the health implications may or may not be.”

“We heard and understand community concerns,” he said about the meeting.

“We are fully committed to undertaking the necessary clean-up both in the short and long-term to ensure community and environmental issues are addressed.”

Mother-of-two Michelle Myers, 35, was forced to relocate her family to her mother’s unit in Woolooware due to the health problems she was facing.

Myers said she could not walk down to her local shops without getting a headache and feeling sick.

“It’s really hard because it’s a small unit… it’s so hard not being in your home with a young family,” she said.

Tony Talotta, owner of the local pizza shop Talotta’s Pizzeria, has been suffering from burning eyes and headaches all week while working at his store.

Living in Sylvania, Talotta said his symptoms would disappear once he got home. He went to the doctor after the symptoms continued.

“He said the only way you can get eyes like that is from a chemical spill,” he said.

The NSW Environment Protection Authority, who conducted pollution testing in the area this week, said they expect the fuel odours to reduce as the cleanup continues.

They also said Ampol would face regulatory action if breaches of the environment protection legislation are found.