Stranded on a tiny Italian island, a cancer researcher grew increasingly alarmed to hear that one, and then three more visitors had fallen ill with COVID-19.

Paola Muti braced for a rapid spread of the coronavirus due to the 800 closely-knit islanders, many of whom she knows well. Her mother was born on Giglio Island and she often stays at the family home with its charming view of the sea through the parlor’s windows.

But days passed and none of Giglio’s islanders developed any COVID-19 symptoms even though the conditions seemed favourable for the disease to spread like wildfire.

The Gigliesi, as the residents are known, socialise in the steep alleys near the port or on the granite steps that serve as narrow streets in the hilltop Castle neighbourhood, with densely packed homes built against the remnants of a fortress erected centuries ago to protect against pirates. 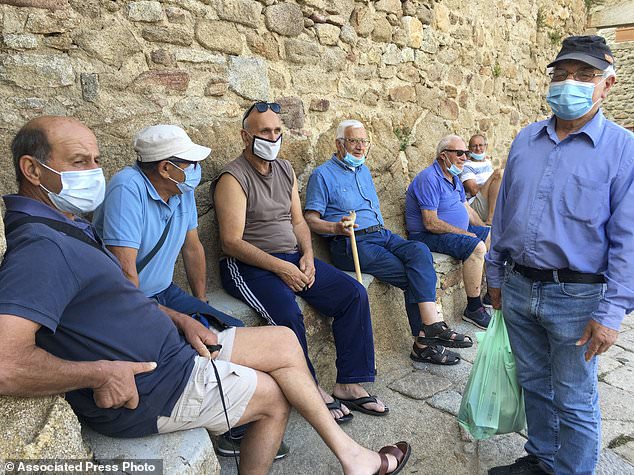 Local residents on Giglio Island, Italy wear face masks as they socialise. The Italian island has been spared the ravages of Covid-19

Dr. Armando Schiaffino, the island’s sole physician for around 40 years, shared Muti’s worry that there would be a local outbreak.

‘Every time an ordinary childhood illness, like scarlet fever, measles or chicken pox strikes, within a very few days practically all get’ infected on Giglio, he said in an interview in his office near the port.

Muti, a breast cancer researcher at the University of Milan where she is an epidemiology professor, decided to try to find out why it wasn’t happening this time.

Were residents perhaps infected but didn’t show symptoms? Was it something genetic? Something else? Or just plain luck?

‘Dr. Schiaffino came to me and told me, ‘Hey, look, Paola, this is incredible. In this full pandemic, with all the cases that came to the island, nobody is sick.’ So I said to myself: ‘Right, here we can do a study, no? I am here,” Muti said. 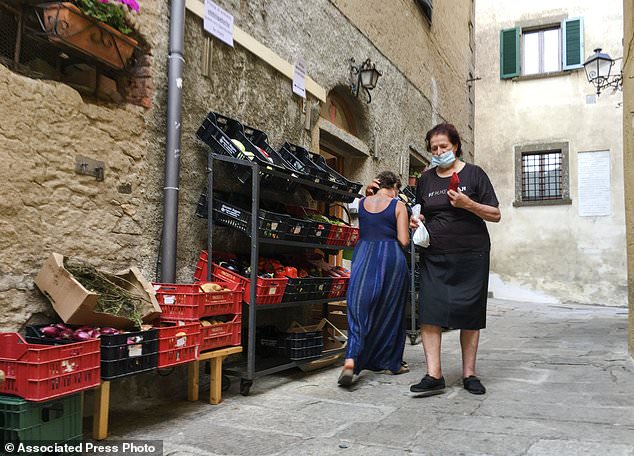 Residents of Giglio island shop in the steep alleys near the port. In spite of various people with coronavirus stopped by the island at times, no one of the islanders developed COVID-19 infection

By then, Muti was trapped on the island by Italy’s strict lockdown rules. What was especially puzzling to her was that many of the islanders had had close contact with the visitors.

Giglio’s first known COVID-19 case was a man in his 60s who arrived on February 18 – a couple of days before Italy’s first ‘native case’ would be diagnosed in the north. The man came to Giglio for a relative’s funeral, and had been ‘coughing all the way’ though the service, Muti said.

The virus is mainly spread through droplets when someone coughs, sneezes or talks. The man headed back on the ferry the same day to the mainland and died three weeks later in a hospital.

On March 5, four days before the national lockdown was declared, three more visitors came from the mainland and would test positive on the island. One of them was a German man from northern Italy, the initial epicentre of Europe’s outbreak.

He socialised for several days with longtime friends in Giglio, including in public eateries. After a week, due to a bad cough, he was tested on the island and the result was positive. He self-isolated in a house on Giglio.

There were other known cases, including an islander who had lived in Australia for two years before slipping back onto Giglio in mid-March during lockdown to see his parents. Three days after arriving on Giglio, he developed a mild fever and tested positive, Muti said. He self-isolated at his parents’ home.

No other case has surfaced on Giglio, including since lockdown was lifted in early June, and tourists from throughout Italy have been arriving. 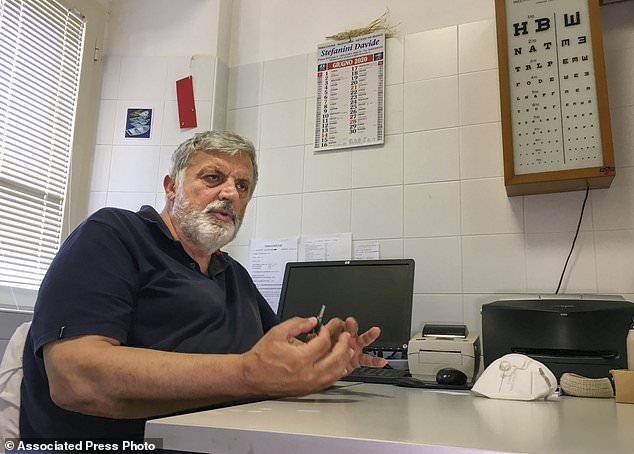 Armando Schiaffino, the island’s doctor for some 40 years now, talks with the Associated Press during an interview in his studio on Giglio Island in Italy

Giglio is part of Tuscany, and its health office quickly sent over kits to test for antibodies to see if others may have had COVID-19. In late April, just before the first lockdown travel restrictions would be eased, the islanders had their blood tested, lining up outside the island’s school and doctor’s office.

Of the 800 or so year-round residents, 723 volunteered to be tested.

‘We all wanted to do it, to be tranquil’ about any possible infection, but also ‘to help science,’ said Simone Madaro, who had been working at the cemetery while the infected man had gathered with fellow mourners. 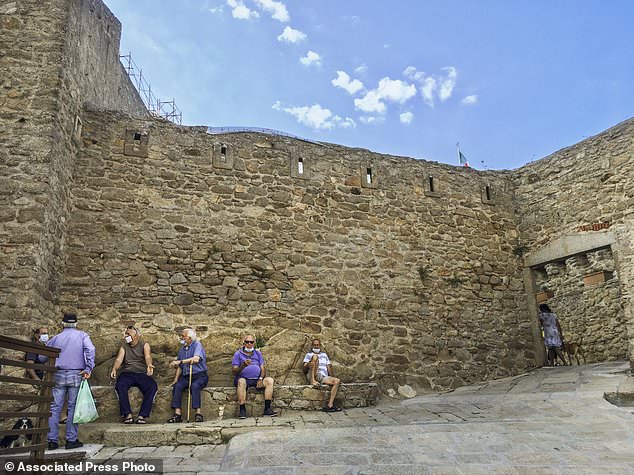 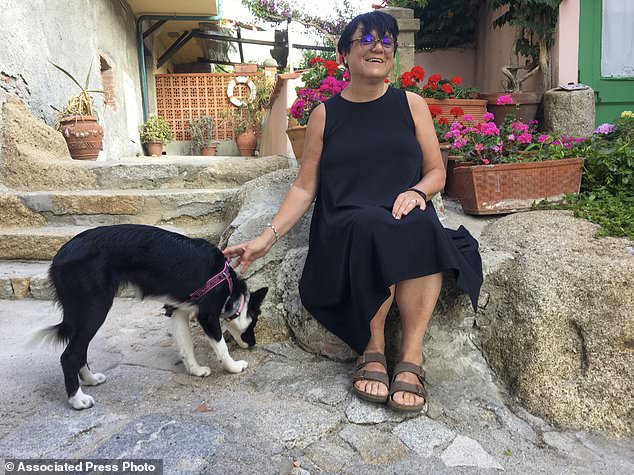 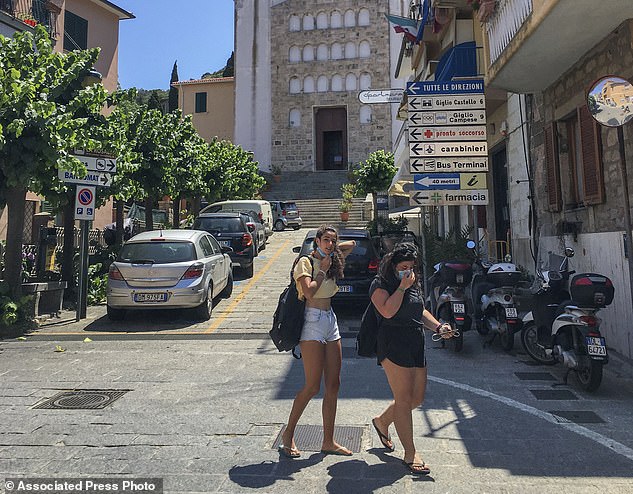 The Rev. Lorenzo Pasquotti, the priest who conducted the service for around 50 mourners, and who himself was tested recalled: ‘After the funeral, there were greetings, hugging and kissing,’ as is the custom. Then came the procession to the cemetery, where ‘there were more hugs and kisses.’

Of the islanders tested, only one was found to have antibodies, an elderly Gigliese man who had sailed on the same ferry to the island with the German visitor, Muti said.

Intrigued about why ‘the virus didn’t seem to interact’ with the island’s native population, Muti hadn’t reached any conclusions by the time she was preparing to leave the island this month. She plans to write up up her study for eventual publication. 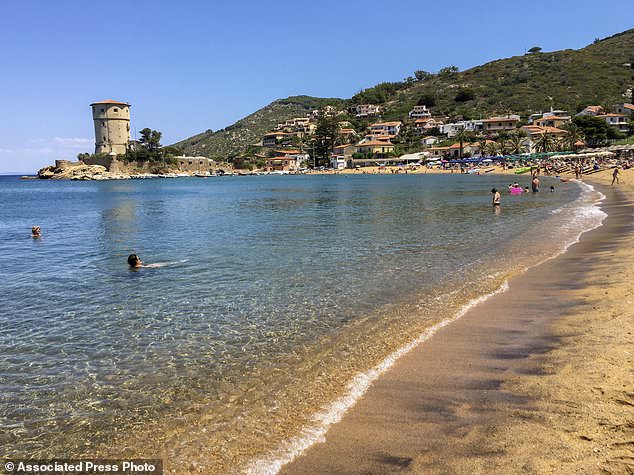 People enjoy the sun and the fresh water on a beach on Giglio island, in Italy last week

That possibility was also voiced by Massimo Andreoni, head of infectious diseases at Rome’s Tor Vergata hospital. He noted some patients are simply less capable of spreading the disease for reasons that are still unclear.

Chance might have played a role, said Daniel Altmann, a professor of immunology at Imperial College London. ‘It could be something more or less trivial – nobody got infected because through good luck there was little contact,” he said in an email exchange. 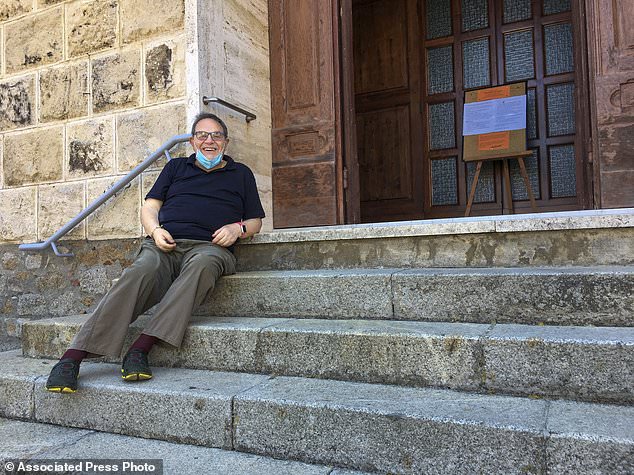 Rev. Lorenzo Pasquotti poses for photos on the steps of his church on Giglio Island in Italy 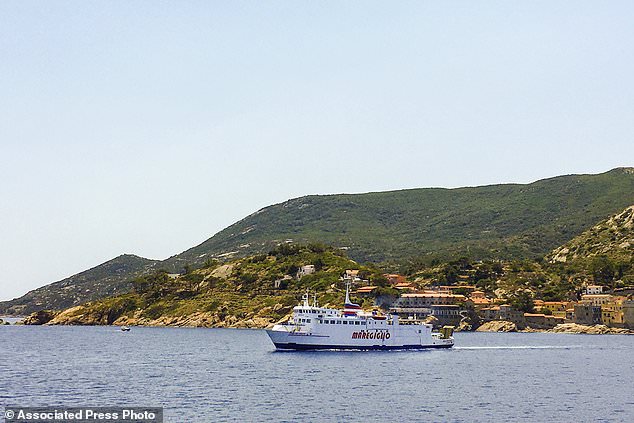 A ferry leaves Giglio island. In spite of various people with coronavirus stopped by the island at times, no one of the islanders developed COVID-19 infection

Or, Altmann also noted that ‘it could be something important and exotic,’ such as a genetic variant common among the island’s population.

With many of the Gigliesi intermarrying through generations, Muti would like to do a genetic study someday if she could obtain funding.

Giglio lies in pristine waters in a protected regional marine sanctuary, and the islanders voice relief that they live in a natural environment they like to think is good for health, whatever Muti’s study might determine.

‘As an island, as the environment goes, we’re OK, no?’ said Domenico Pignatelli, as the elderly man kept company with friends in chairs placed on a stony street atop Giglio.