Home » World News » Does Boris Johnson have the numbers in Parliament for new Brexit deal?

Does Boris Johnson have the numbers in Parliament for his new Brexit deal? Backing from DUP, Tory rebels and ‘sensible’ Labour MPs could get the PM over the line

The government is increasingly bullish about the chances of Boris Johnson’s proposed new Brexit deal being agreed by Parliament.

The EU is yet to formally respond to the PM’s backstop replacement plan and for the moment the success or failure of his proposal hinges entirely on what Brussels does next.

If the bloc rejects the plan then there will likely either be a chaotic No Deal Brexit on October 31 or a fresh delay.

But if the EU agrees that what Mr Johnson has come up with could form the basis of a divorce accord then attention will turn to the House of Commons and whether a majority of MPs would back it.

When MPs voted on Theresa May’s Withdrawal Agreement for the third and final time on March 29 it was defeated by 344 votes to 286, a majority of 58.

That means Mr Johnson will need to persuade approximately 30 MPs to switch from opposing a deal to voting for one.

That also assumes that none of the 286 MPs who voted for the original deal have subsequently changed their minds.

The path to a majority appears deceptively simple on paper but would be devilishly difficult to actually deliver.

The PM will need almost every Tory to back him as well as most of the 22 former Conservative rebels, the DUP and at least some of a cohort of approximately 30 Labour MPs who are reconciled that Brexit has to happen. 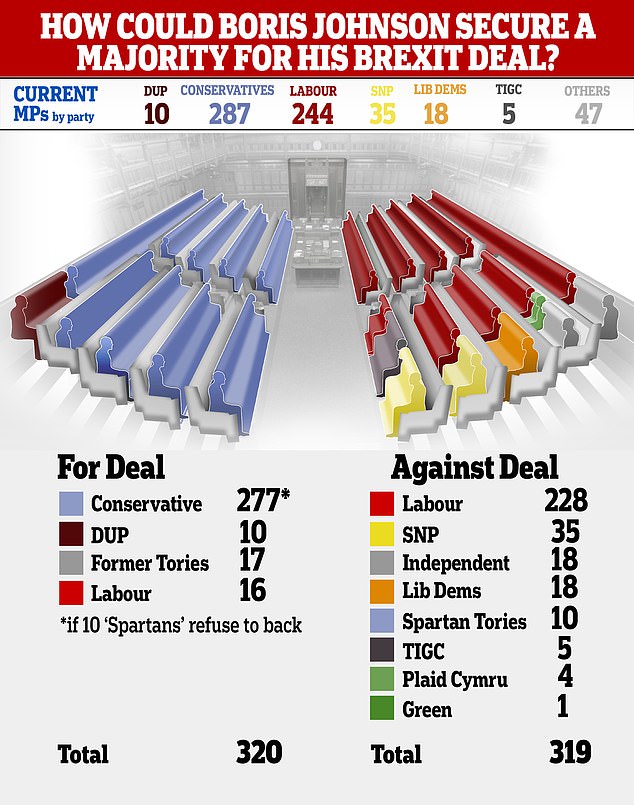 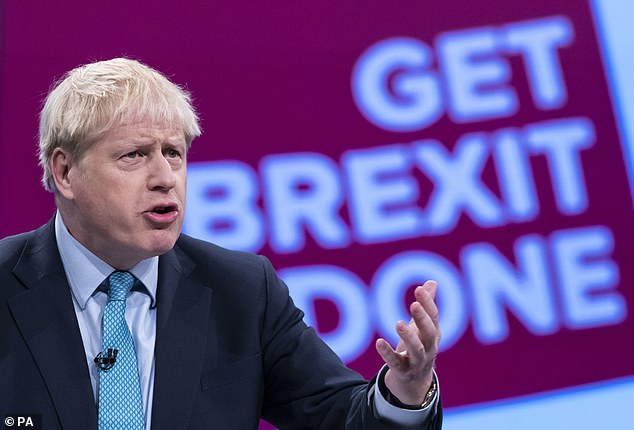 Boris Johnson, pictured in Manchester yesterday, has submitted a ‘final offer’ on Brexit to the EU, setting out how he believes the backstop can be deleted 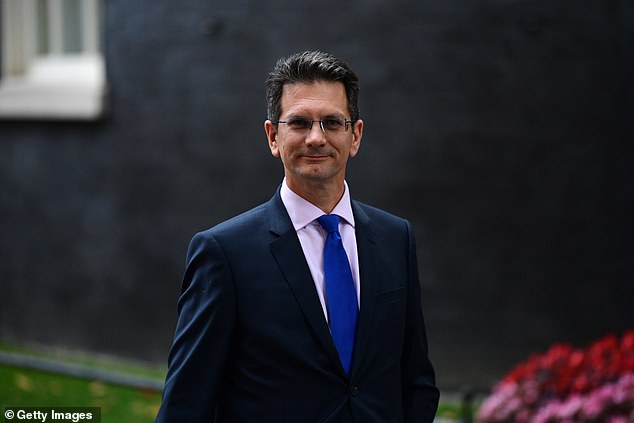 The government is relatively bullish about the PM’s plan getting through the Commons – assuming the EU agrees to move forward with it. The potential support of Brexiteer Tories like Steve Baker (pictured in Downing Street at the start of September) could be crucial

What is Boris Johnson’s five-point plan to scrap the Irish backstop?

Northern Ireland would leave the Customs’ Union with the rest of the UK but stay in the single market.

This would constitute an ‘all island regulatory zone’ that covers trade of all goods. It would mean no checks between the two nations, because Northern Ireland would still have to follow EU rules.

Goods from Britain to Northern Ireland would effectively be managed by a border in the Irish Sea, with checks only in that direction, not the reverse.

The ‘all island regulatory zone’ will have to be approved by the people of Northern Ireland. This means the Northern Ireland Assembly has the right to veto the zone and could hold a referendum on the matter.

A promise of a ‘new deal for Northern Ireland’ means ministers putting money aside for Belfast and Dublin to help aide economic development and ensure new measures work.

Keeping to the Good Friday agreement

Freedom of movement between two countries will remain. New deal would confirm commitment to collobaration between UK and Ireland.

There are 650 MPs but seven Sinn Fein representatives do not take their seats while four do not vote because of their roles as speakers.

That means the magic number for a majority is 320.

If the PM was able to secure all of the votes of all of the groups mentioned above he would comfortably get above that threshold.

Michael Gove, the minister in charge of the government’s No Deal contingency planing, last night said he believed the PM would have the numbers to get the deal over the line.

He told ITV: ‘It has got a very good chance of getting through. The DUP are supportive of it. They didn’t support any of the previous three attempts to get a deal.

‘I know that some Conservative MPs who were unhappy with the Withdrawal Agreement Theresa negotiated have said that they are supportive of this deal.

‘So we have the DUP, Conservatives who were previously opposed and some broad-minded and  constructive Labour MPs.

‘That seems to me to be a pretty solid majority and it is one that the EU can take reassurance from as well because one of the concerns the  EU has had in the past is if we make a concession will it get through Parliament?’

Some 34 Tories voted against Mrs May’s divorce deal on March 29 with most of them hardline Brexiteers and members of the European Research Group of Tory Eurosceptic MPs.

Downing Street is believed to be confident of getting that grouping of so-called ‘Spartans’ down into single figures and that would represent a significant step towards a deal being agreed.

One of the ‘Spartans’, ERG chairman Steve Baker, welcomed the PM’s plan but did not guarantee that he would vote for it.

He told the BBC: ‘This is a great place to be starting as we go into this council where the final text will be agreed but it only deals with Northern Ireland.

‘The Prime Minister has made a great and very significant move here by saying we will have a free trade agreement as the destination… so this is a great shift from where we were.’

He added: ‘But we haven’t yet seen that destination set out in full and there are other problems with the Withdrawal Agreement.’

But even if Number 10 is able to win over most of those MPs, it will also have to ensure that most of the 21 Tories who were stripped of the whip after backing a bid to block No Deal and Amber Rudd who then quit the party are still on board.

Most of them backed the original deal and many will be expected to support Mr Johnson’s proposed agreement but after their expulsion this is far from guaranteed.

Meanwhile, the DUP and its 10 MPs are backing the PM’s proposals. The party opposed Mrs May’s deal in all three of the crunch votes.

The party said in a statement yesterday: ‘This offer provides a basis for the EU to continue in a serious and sustained engagement with the UK Government without risk to the internal market of the United Kingdom.’

The final group of MPs who will be in the PM’s sights will be the so-called Labour ‘pro-dealers’ who believe Brexit must be delivered but who opposed Mrs May’s deal.

But there are thought to be approximately 30 pro-Leave Labour MPs who could be persuaded to support a deal in order to get Brexit done.

Initial noises were positive after the PM made his plan public but the premier clearly has a lot of work to do to win them all over – as made plain by Labour MP Gareth Snell.

He said: ‘Despite what some on Twitter are suggesting, mine and Ruth Smeeth’s position remains as it always has.

‘We want the best deal possible, and one that is backed by the EU and elected politicians in NI. It’s absolutely not carte blanche support – and never has been.’