Fox News Flash top headlines for May 8 are here. Check out what’s clicking on Foxnews.com

A Florida homeless man was arrested on animal cruelty charges Wednesday after allegedly dragging a pit bull behind his pick-up truck, badly injuring the dog.

Police said Gregory Tousignant, 58, was driving while his pit bull was standing in the bed of the truck. Witnesses saw the 1-year-old pup named Ollie jump from the truck, and then get dragged by a rope tied to his collar before slipping out of the collar.

FLORIDA BOY CALLED 911 BECAUSE HE WAS LONELY AND WANTED A FRIEND, POLICE SAY 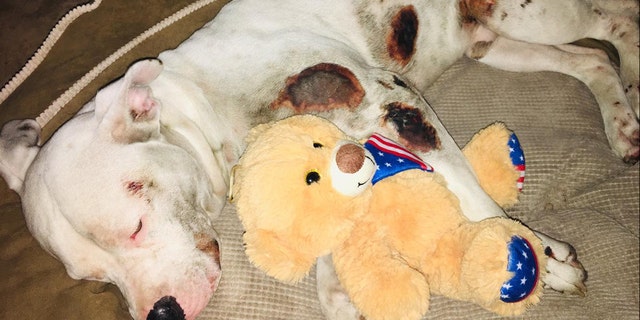 A pit bull named Ollie was injured after being dragged behind a pick up truck, police said.
(Nature Coast Animal Wellness & Surgical Center/Facebook)

“He came loose and flew into the median at which point he was rescued," a man who witnessed the incident, Jan Harwood, told Orlando's FOX 35. Harwood owns Nature Coast Animal Wellness & Surgical Center where Ollie is recovering from severe road rashes and bloody paws.

“He’s doing really well, he doesn’t have any broken bones or internal injuries,” Harwood said of the dog.

Michael Terry, a spokesman for the Hernando Sheriff’s Office, said it did not appear that the dog’s owner intentionally dragged the dog behind the truck to harm him. It is illegal in the state of Florida to transport an animal in the bed of a truck if it is not properly secured.

Nonetheless, Tousignant is charged with animal cruelty, which carries a $1,000 bond, Fox 35 reported.