Sit! Now… POSE! Dog owner reveals the secret to getting her seven pet pooches to line up for stunning photographs

These are the stunning pictures of seven adorable dogs – which could be the most obedient pooches in Scotland.

Kaylee Robertson has six Shetland Sheepdogs and one Alaskan Klee Kai which she says are like ‘fully- trained models’.

The 28-year-old’s clever pups have been taught to stand together while she takes pictures of them striking a pose. 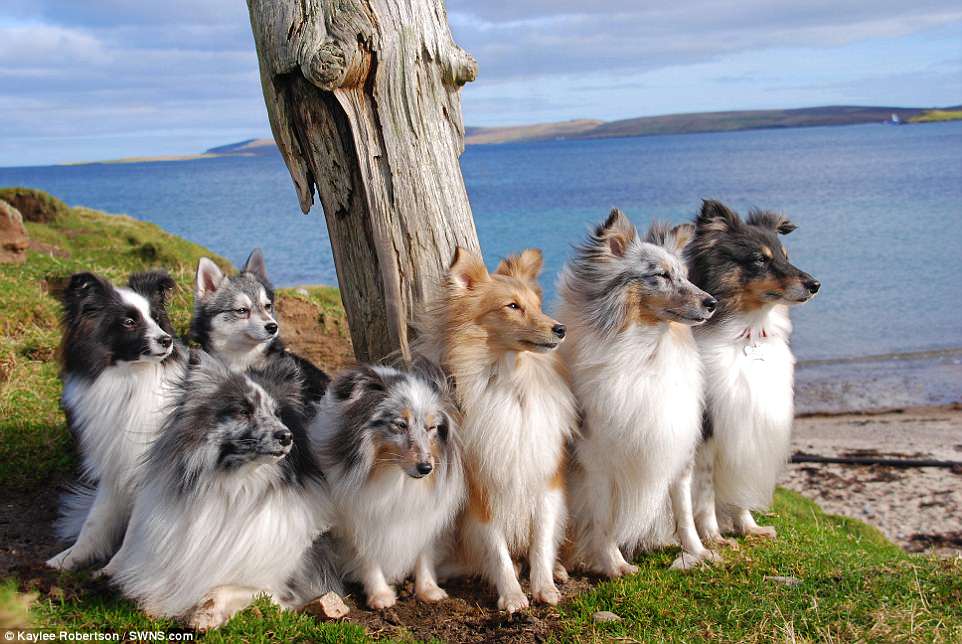 Look left! The seven well-behaved canines look majestic blowing in the wind by the sea during one of their adorable shoots 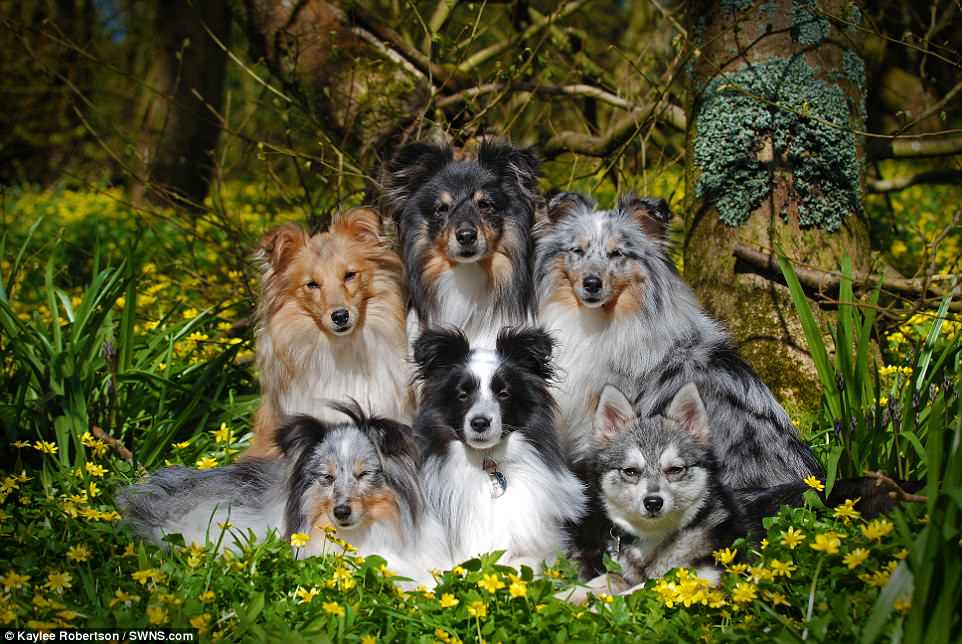 Kaylee Robertson, from Scalloway in Scotland, loves getting her pooches to pose up for adorable photos in scenic settings 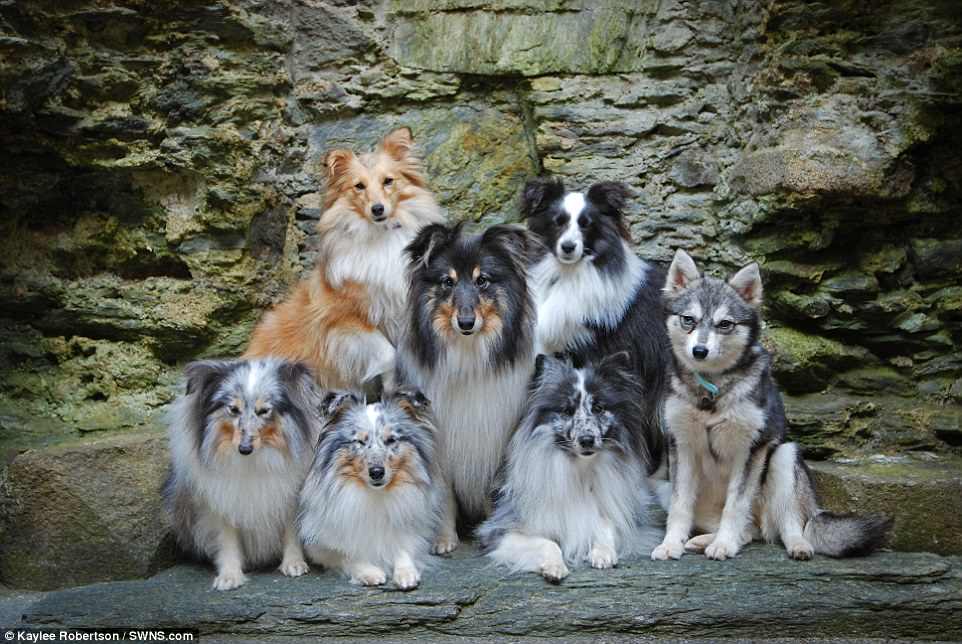 Kaylee’s six Shetland Sheepdogs and one Alaskan Klee Kai pose for the camera. She says they are like ‘fully- trained models’ 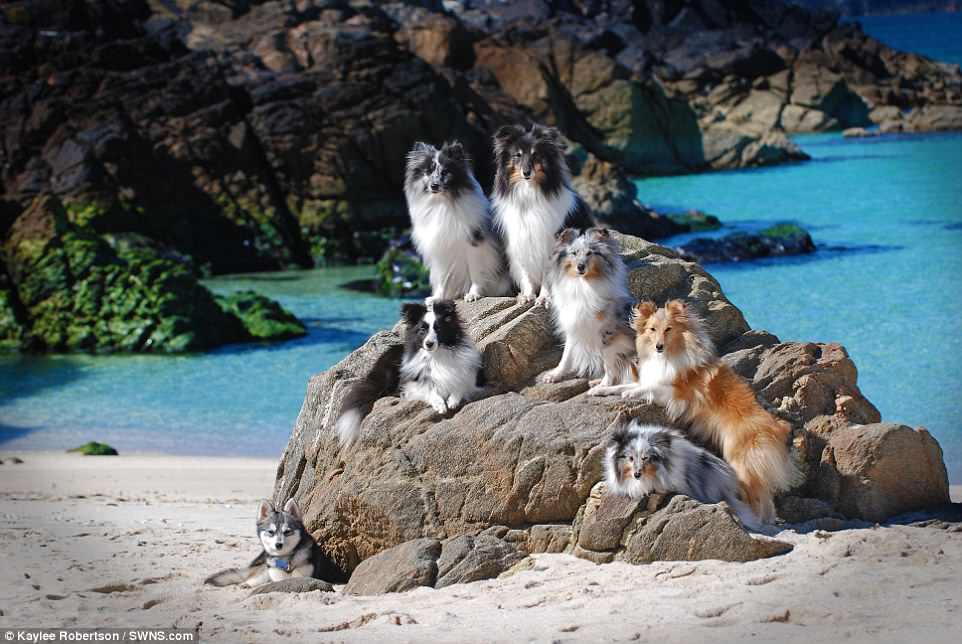 Perfectly positioned: Kaylee has a knack for getting her pooches to pose in artistic positions. Here she used an attractive-looking rock by the sea as a prop 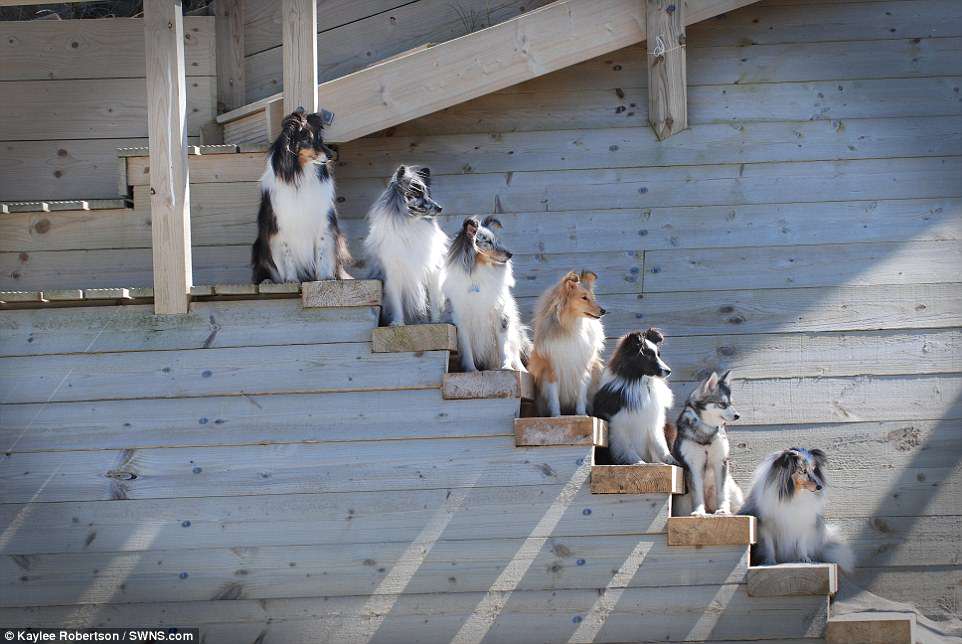 Obedient: Kaylee’s incredibly well-behaved canines wait patiently for their picture to be taken – and even point their heads in the same direction!

Some of the dogs, who are named after Lord of the Rings and Game of Thrones characters, have been posing since they were four weeks old.

Kaylee, an ambulance technician from Scalloway, the largest of the Shetland Islands, says the trick to having such well-trained dogs is ‘bribery’. 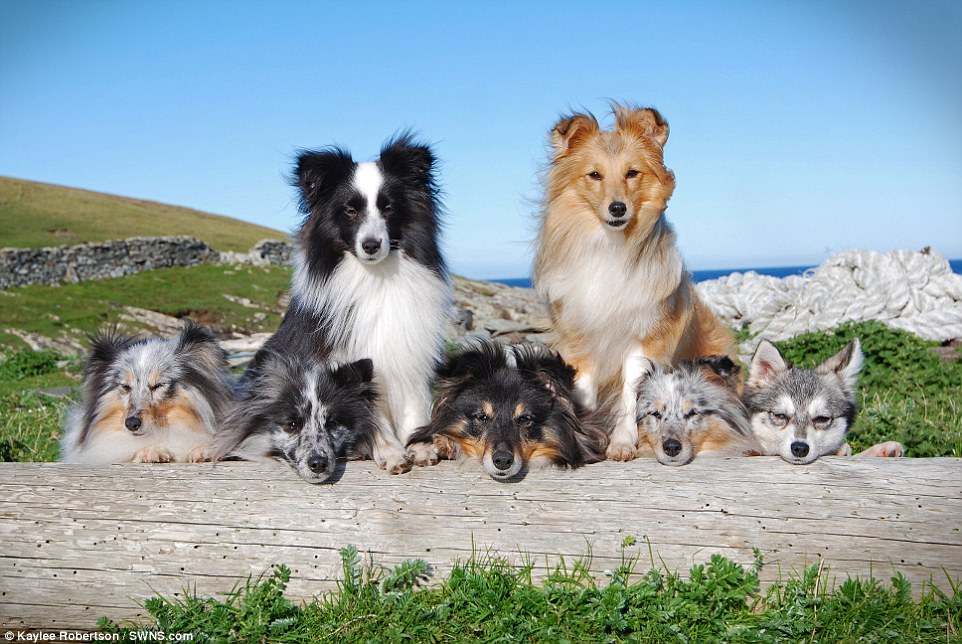 Perfect symmetry: Two of Kaylee’s pooches rest their paws in exactly the same position as the others rest their heads obediently on the log below 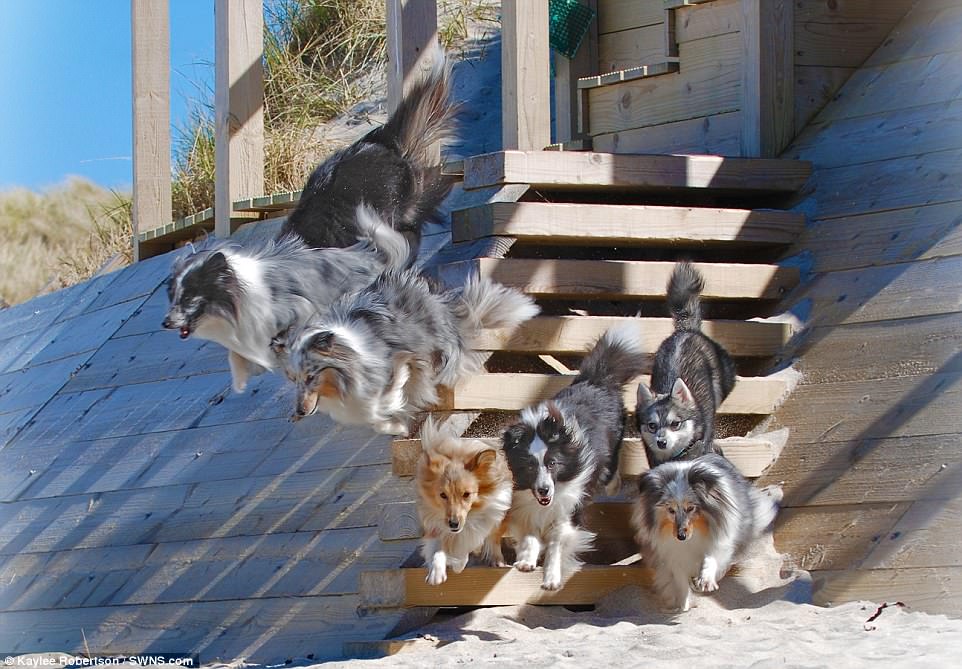 Ready, steady, go! Even when making a chaotic dash onto the beach, there appears to be method in the madness as Kaylee snaps a majestic shot 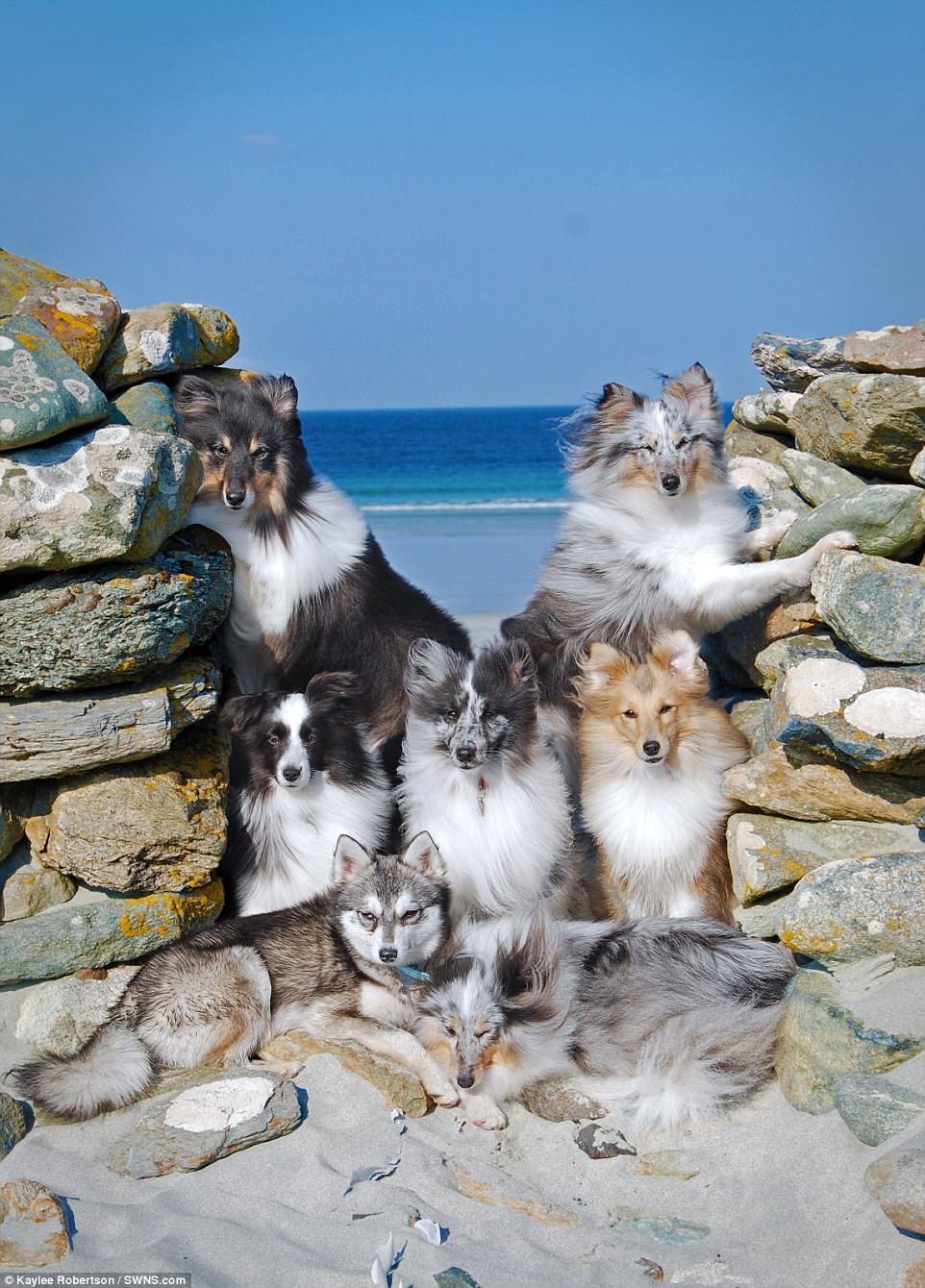 Models in the making: The seven adorable dogs look very at home in front of the lens, this time posing with some piles of rocks on the beach 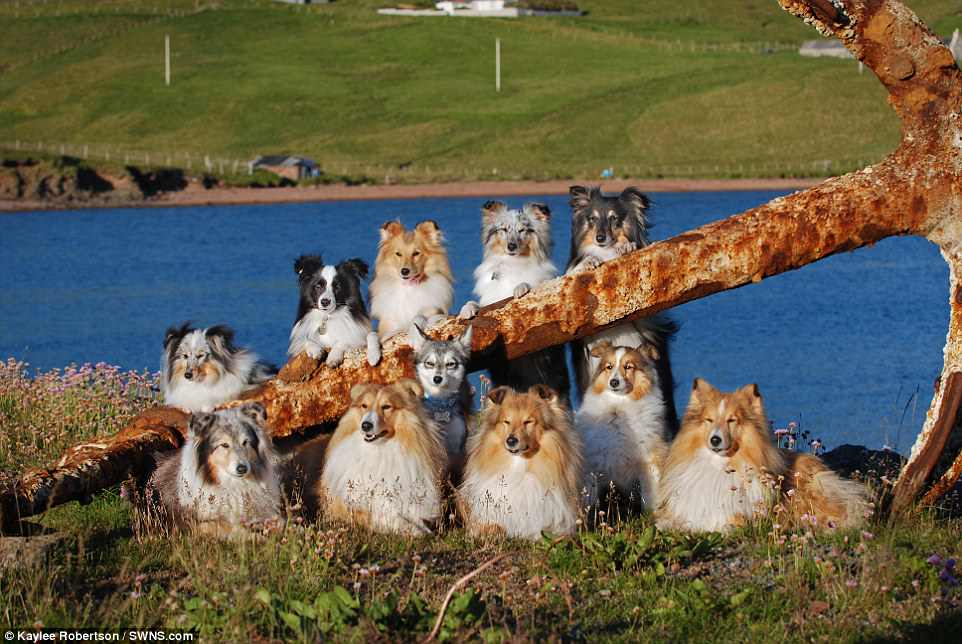 Kaylee roped in more well-behaved pooches for this photo, posing up her subjects in front of the deep blue sea

She said: ‘We give them lots of treated and positive reinforcement.

‘When they had sat nicely and looked at the camera we would throw them a ball. They associate it as a game.’

When Kaylee gives the command for them to ‘release’ they are rewarded with a ball, which they all end up squabbling over. Catching some rays: Kaylee’s pups slip on their shades for this slick shot in front of a colorful graffiti-ed wall 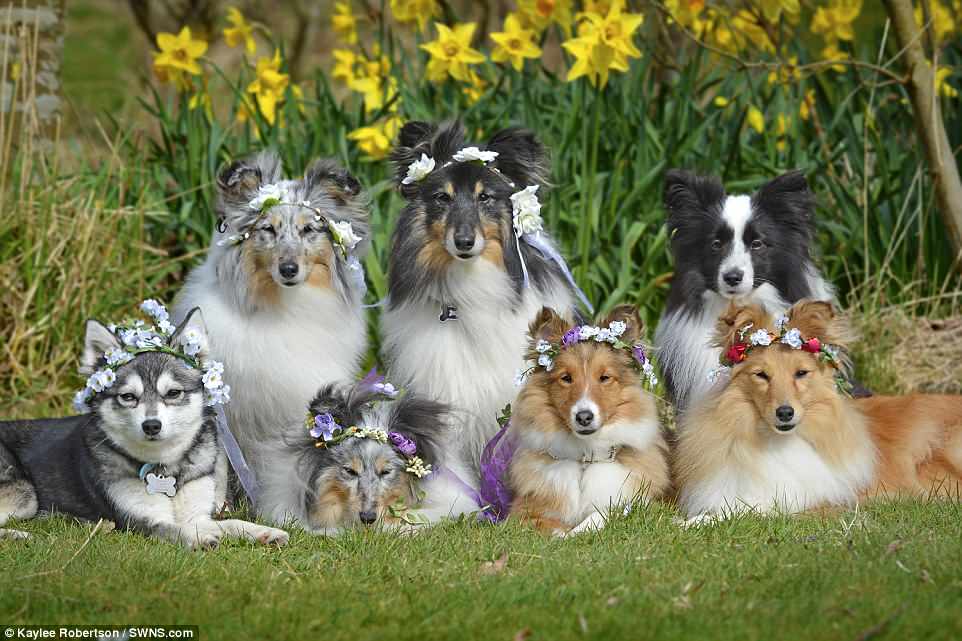 Look this way! The seven immaculately turned out dogs look pretty as a picture in this flowery-inspired photo 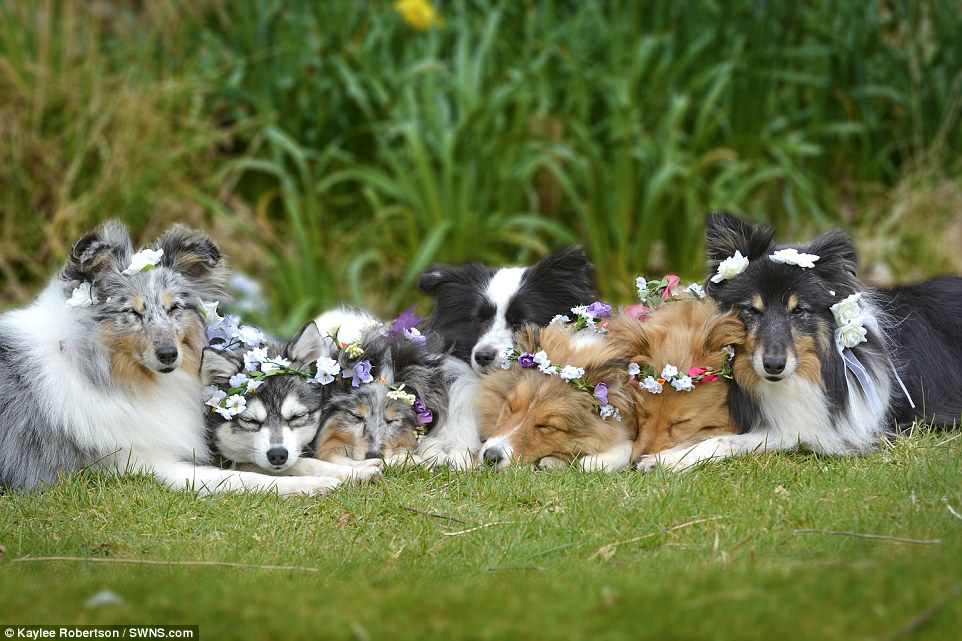 Time for a rest: Kaylee’s dogs look blissfully relaxed as they snuggle up together wearing flowery headbands in this cute shot 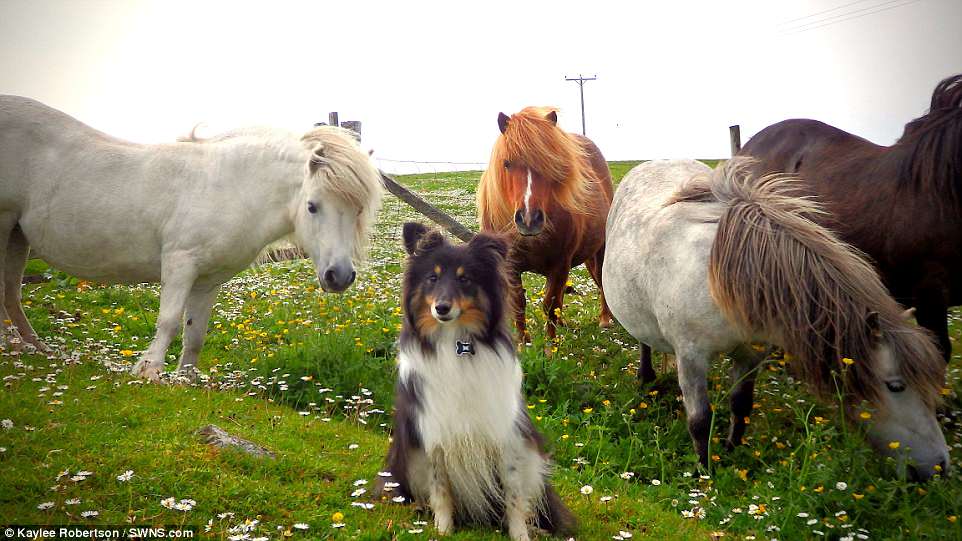 All alone! In a rare single-dog shot, Kaylee snaps one of the Shetland Sheepdogs with some ponies in a grassy meadow 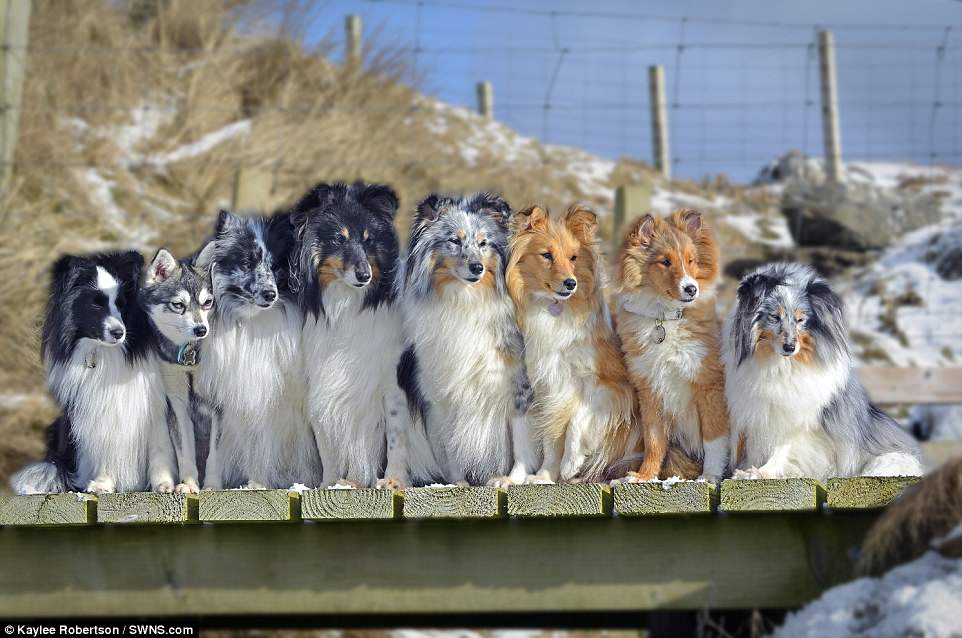 Are we done yet? The long-haired pups look eager to break their poses and go for a scamper along the beach in this stunning photo

And the dogs have become local celebrities, with patients always asking Kaylee about them when riding in the back of her ambulance.

The avid dog-owner had one Shetland Sheepdog but decided she wanted more. So she decided to surprise her husband-to-be by bringing home one every week after they moved in together.

She said: ‘He was so mad. I had it all planned, I was going to make him a nice meal when he came home and surprise him.

‘Now he will kiss the dogs before he kisses me.’

The doggy photographer says the best advice for taking photos of your pooch is to keep a ‘happy dog’.

She said: ‘For anyone wishing to train and take pics of dogs there is one rule – a happy dog makes a great photo.

‘You can’t take a pretty picture of a dog if they look sad.

‘So relax, enjoy the moment and when the timing is right – take the shot.’

In just one of her amazing pictures, the dogs are seen each posing with a colourful balloon.

Kaylee began training the animals as a child with her first dog Flint who was a Shetland Sheepdog.

She said: ‘I had ten beautiful years with that gorgeous soul who I used to show at the local dog competitions.

‘We won pretty much everything and I also scooped the junior handler with him. 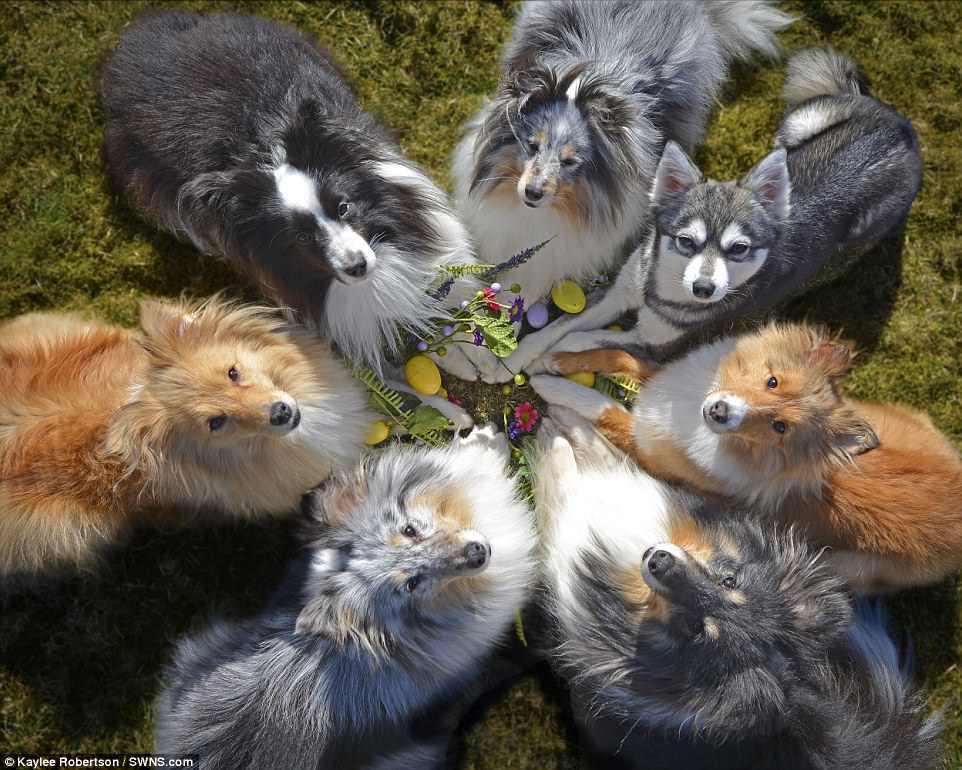 Do you think it might rain? The adorable dogs look very comfortable in front of the lens, gazing obediently into the camera 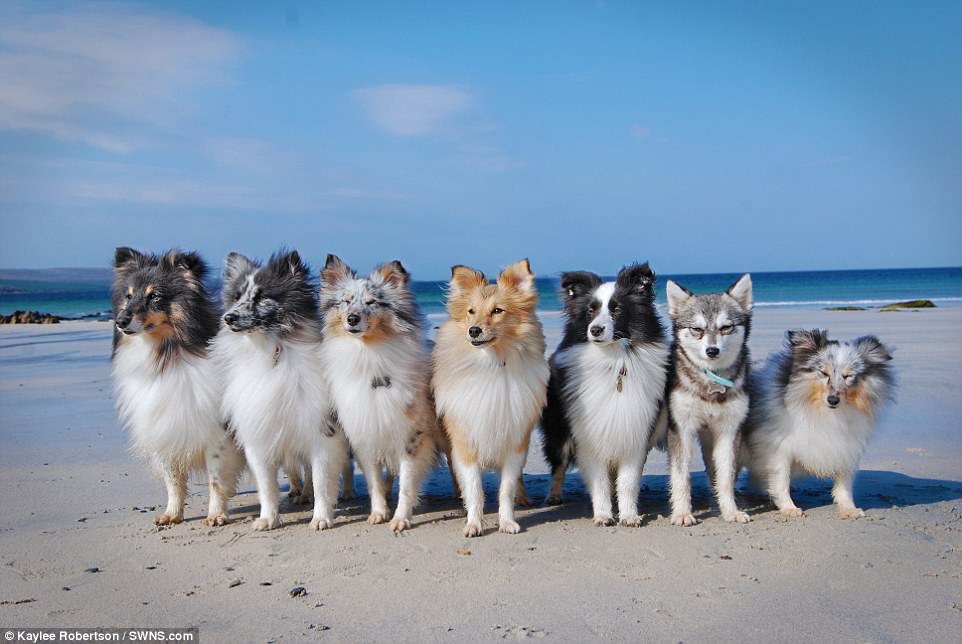 Who’s the tallest? Kaylee experimented with arranging her dogs in height order for this eye-catching shot on the beach 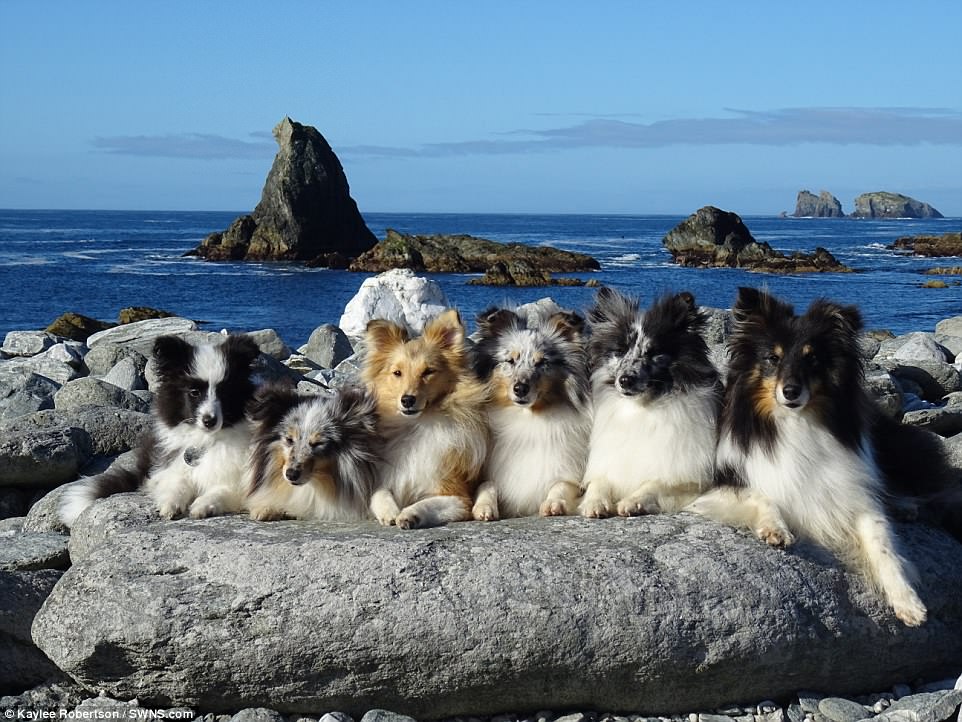 Room for one more? Six of cute dogs squeeze onto a large rock for this impressive photo with a stunning sea view in the background Party time: Kaylee’s pooches line up for a festive shot with balloons in the order they appear in a rainbow 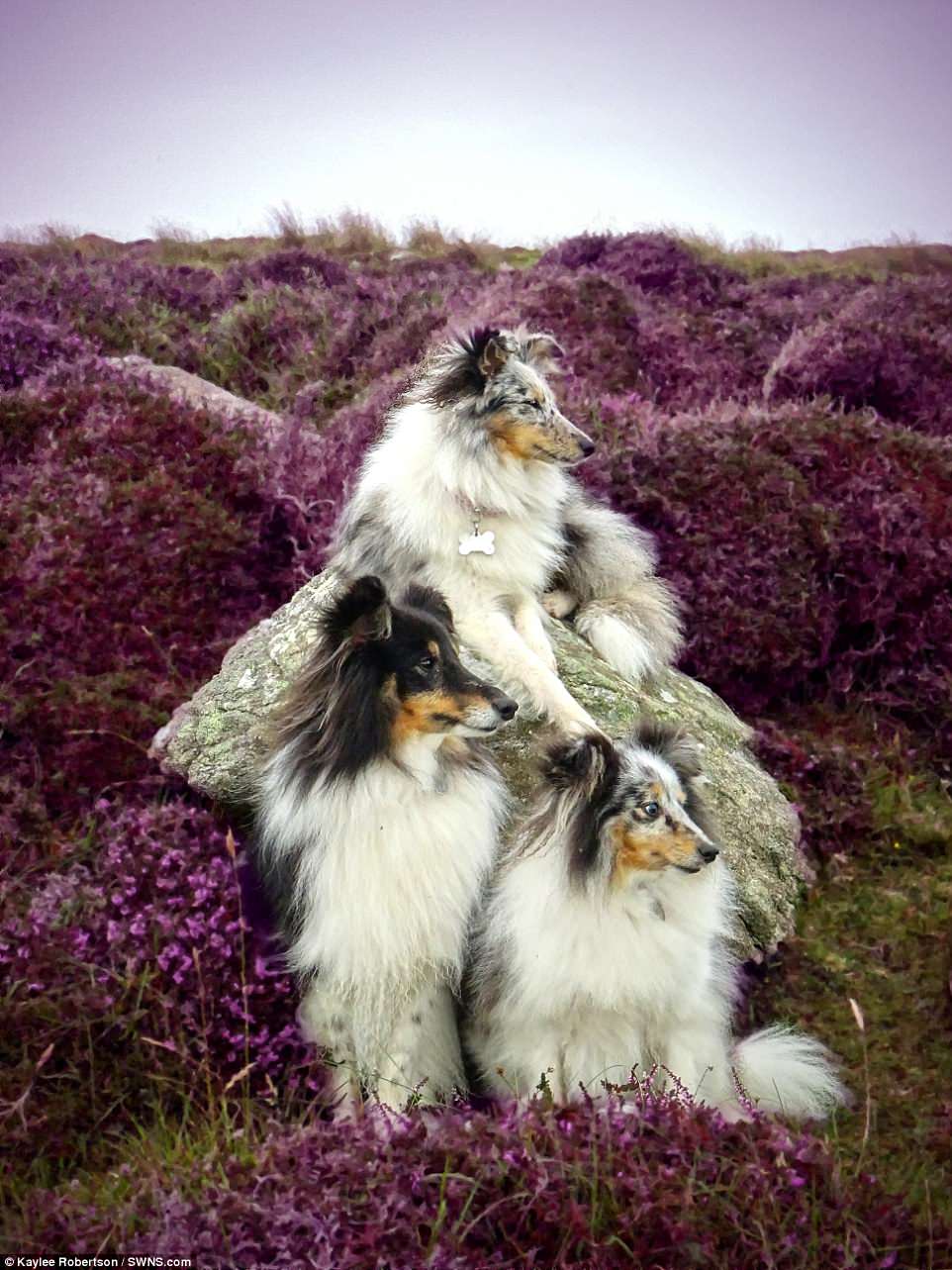 Kaylee sadly lost her childhood pet to bone cancer but he has remained an inspiration for her to train dogs ever since.

She said: ‘He was my inspiration and I cant help but think of him every time I get my camera out.’

Kaylee also gets a lot of requests from other dog-owners asking if she will do a photo shoot with their pets.

She said: ‘A lot of people want me to take pictures of their dogs and think that I must have a way with dogs.

‘What they don’t realise it that it takes years of training.

‘I met a fantastic woman who was travelling the world with her five Shetland Sheepdogs and she stopped in Shetland.

‘They were very well behaved and I managed to get a shot of her group with mine. Very nice to see Shelties coming home to their roots.’

Kaylee’s image are set to be hung on Shetland Hospital’s wall to cheer up patients and she said she ‘feels humbled by the fact that people enjoy them so much’.