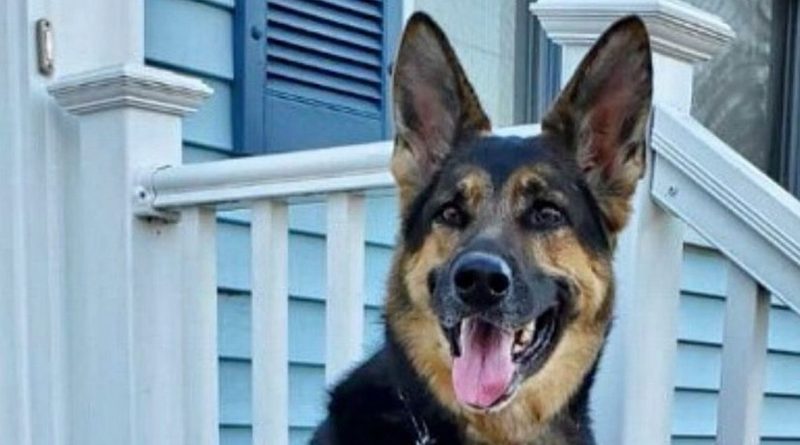 A quick-thinking dog dragged her owner towards a phone after he suffered a stroke – saving his life.

Sadie, a six-year-old rescue German shepherd, was at home in New Jersey, the US, with Brian last week when he collapsed.

She refused to leave his side, licking his face and pulling him across the room to his mobile phone.

Sadie is now staying with Brian’s family while he recovers at a rehabilitation centre – with the pair FaceTiming every night.

She was originally given to the Ramapo-Bergen Animal Refuge when her owner moved.

The shelter posted on Facebook : “Sadie is a loyal dog, but nervous and protective with new people, making her a more difficult placement.

“Just a few months ago, Brian came into Sadie’s life and decided to adopt her.

“Though her bio noted that she was especially nervous with men, Brian felt a special bond with Sadie, as he valued her intelligence, hesitancy to trust and fierce loyalty once she did form that trust.

Last month, another loyal dog moved her owner from the path of a speeding car after she slipped on black ice – saving her life in the process.

Melissa Amos, from the city of New Athens in Illinois in the US, was walking across a car park with her pet Sorsha when she fell over.

Due to her back problems, she was unable to get up – with a car skidding across the ice and heading straight for her.

Melissa posted on Facebook: “Sorsha grabbed the leash in her mouth and dragged me by it out of harm’s way.

“She wasn’t trained for physical assistance, just as she hadn’t been trained for psychiatric service work. She just KNEW. Saved my life.”

Melissa adopted Sorsha – who was shot in the mouth by a previous owner – when she was a 10-week-old puppy at a rescue centre, and the pooch has helped ease her post-traumatic stress disorder (PTSD) and anxiety.

She added: “She wouldn’t sleep that whole first week after we brought her home unless she was physically touching me.

“She bonded so close to me. Then we discovered she understood when I was anxious or having a PTSD episode and would snuggle up to me and lick my hand until I pet her and started to calm down.

“Never taught her that, she just did it. So I got her trained as a service dog so she goes everywhere with me and helps me with my anxiety and PTSD wherever I am.”