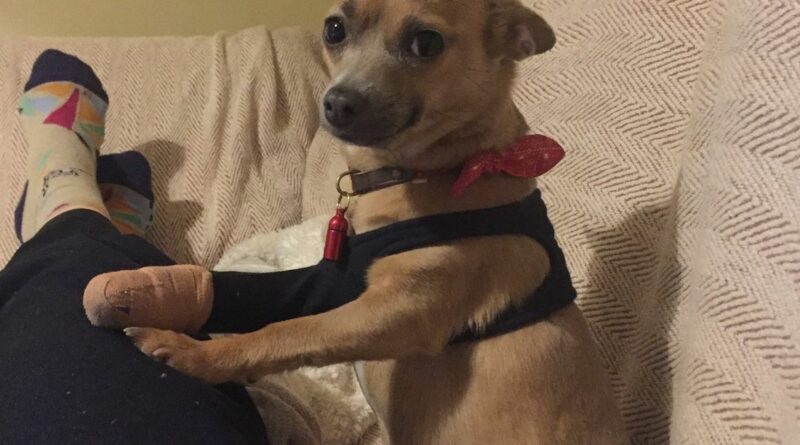 A Chihuahua who was left with broken ribs and a fractured spine after suffering from "brutal beatings" over the Christmas holidays has made a major recovery.

Dolly, now three years old, was saved from the hands of her cruel owner after the vets flagged her suspicious injuries to the RSPCA.

Medical professionals in East Yorkshire said they had become concerned for Dolly's welfare after her owner had visited the vets on three separate occasions in a matter of months.

The bruised Chihuahua was taken in by RSPCA York Animal Home and placed in a foster home with another RSPCA officer who has now adopted her.

Experts suggested the shocking injuries had taken place between August 2019 and January 2020 after examining her devastating wounds.

Dolly was so badly injured that she had puncture wounds to her ear, a dislocated tail as well as paw injuries from where her dewclaws had been ripped off, said the RSPCA.

Inspector Alice Wilson said: "We discovered that her third vertebrae had been fractured – indicative of a tail pull injury – and her tail was dislocated.

"The vet believed that the bruising and swelling around her muzzle was consistent with a heat-related or chemical injury just days before, and they also found blood in her bladder.”

Dolly's new owner, Lucy from Northumberland, said the pooch was "really nervous" when she first took her home.

"She was scared of loud noises, sudden movements and raised voices on the TV," she told the Daily Star.

"She hated the vacuum so I would try and sweep downstairs instead but she was also terrified of the sweep brush."

But after much-need love and nurturing Dolly is now a "completely different dog" and has become "very confident" since being taken in by Lucy.

"She is just a typical Chihuahua who is tiny with a massive personality," Lucy added.

"Now if she hears a loud noise she either carries on sleeping or runs over and barks at wherever it came from instead of running and cowering on the floor."

She added: "Unfortunately, I am working a late on call shift on Christmas Day but she will be staying at a big Airbnb with my family and three of her dog friends.

"I’ll be up there on Christmas Eve but I’m sure she’ll have a lot of fun exploring a new place and begging everyone for a bit of their Christmas turkey."

Lucy went on to say that she gets a bit emotional anytime she thinks about the traumatic ordeal Dolly had to go through before she was saved.

Her previous owner Joshua Green, 30, has been banned from keeping animals for life after pleading guilty at Hull Magistrates' Court on September 28 this year.

He was sentenced to 12 weeks in jail suspended for 12 months, previously reported by Hull Live.

Speaking about how Dolly was treated, Lucy added: "I hate seeing the before photos of her I just don’t understand how anyone could hurt an animal, especially one so small, she just stood no chance.

"I’m happy that I have her and I’m happy that she seems to enjoy life now but she never should have been in a position where she was at risk from the person that was supposed to care for her.

"When I think about her life before I just hope she doesn’t remember it and I guess that’s why I do this job – it makes me so mad and upset at times but it’s a great feeling to know that you helped get an animal out of an awful situation and got some justice for them.

"I’m really grateful to the vets for noticing something wasn’t right and to Alice for investigating and persuading me I needed a tiny dog in my life."