According to the report, the proposal to release the video has received a mixed reaction inside his orbit. A person close to the former US President told CNN that the CCTV footage has been so closely held that aides to the former President aren’t sure if he has seen it in full himself.

The person said: “I don’t think it’s been shared by anyone outside of the attorneys.”

Yet when asked earlier this week by Fox’s Sean Hannity whether the footage would be released, Trump’s son Eric said, “Absolutely Sean, at the right time”.

Some of Trump’s aides and allies have encouraged the former President to make some of the footage available to the public, believing it could send a jolt of energy through the Republican Party’s base.

One person familiar with the conversations said there have been discussions about featuring the August footage in campaign-style ads, believing the footage could bolster Trump’s claims of political persecution. 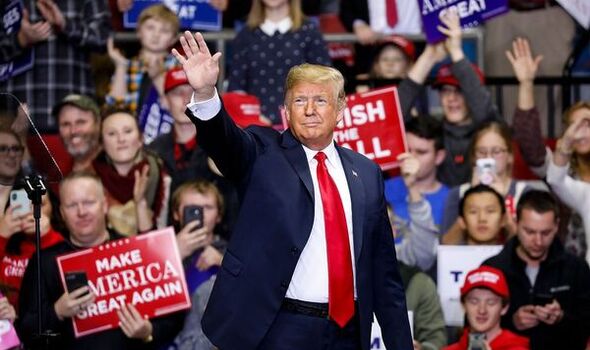 Another person close to Trump said it’s not a matter of if the former President and his team release any of the footage, but when, noting it could be released before he makes a campaign announcement.

Others in Trump’s orbit have warned of the potential risks to the former President if he does release the tapes.

A second person close to Trump cautioned that releasing the footage could backfire by providing people with a visual understanding of the sheer volume of materials that federal agents seized from his oceanfront residence, including classified materials.

The person told CNN: “It’s one thing to read a bunch of numbers on an inventory list, it’s another to see law enforcement agents actually carrying a dozen-plus boxes out of President Trump’s home knowing they probably contain sensitive documents. I don’t see how that helps him.”

Federal agents were prompted to request a warrant to search Donald Trump’s Mar-a-Lago estate after reviewing new footage of a hallway outside a storage facility where classified information was being kept, The New York Times reported.

The Times reported that the National Archives and Records Administration had contacted Trump’s legal team earlier this year after discovering that key documents were missing from the Trump administration’s records.

Trump’s team had handed over several boxes of materials in January.

The Justice Department then returned to Mar-a-Lago in June to collect several more documents that had been marked as classified, which had not been handed back following the original request.