Donald Trump will send a Presidential Alert to EVERY smartphone in the US today at 2.18pm ET as he tests a new emergency service similar to Amber Alerts (and you CANNOT opt out)

Today every smartphone in America will receive a Presidential Alert – a forthcoming service via Wireless Emergency Alert System that Donald Trump is using in case of national emergency.

The message will go out to smartphones at 2.18pm ET Wednesday, as the US President tests how it will work in a new collaboration with The Federal Emergency Management Agency (FEMA).

It’s very similar to Amber Alerts, however unlike the noisy notifications that warn people in a particular area of a child abduction – people cannot opt out of this one. 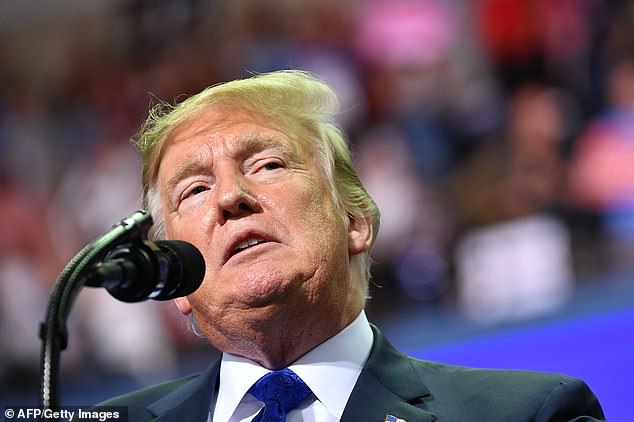 Today every smartphone in America will receive a Presidential Alert at 2.18pm then TVs and radios will be interrupted at 2.20pm Wednesday by order of Donald Trump. Trump is seen above speaking in Mississippi during a rally Tuesday

Anyone within range of a working cell tower and with a mobile device that is switched on will receive the message on their screens whether they like it or not.

The FEMA website states that the cell network provider must participate in WEA in order for the message to go through.

Approximately 100 networks have deals with FEMA and the alerts are estimated to reach about 95 per cent of Americans.

This afternoon (or morning for those on the West Coast) there will be no need to respond though.

‘THIS IS A TEST of the National Wireless Emergency Alert System,’ the message will state. ‘No action is needed.’

But the special tone and vibrations – broadcast twice – are not the only ones guaranteed to get the attention of people all over the country today. Within two minutes another message will go out.

The second one is will be a test of the Emergency Alert System that looks at the effectiveness of sending a message via broadcast, cable, satellite and wireless providers.

Anyone with their TV or radio on should expect the interruption. 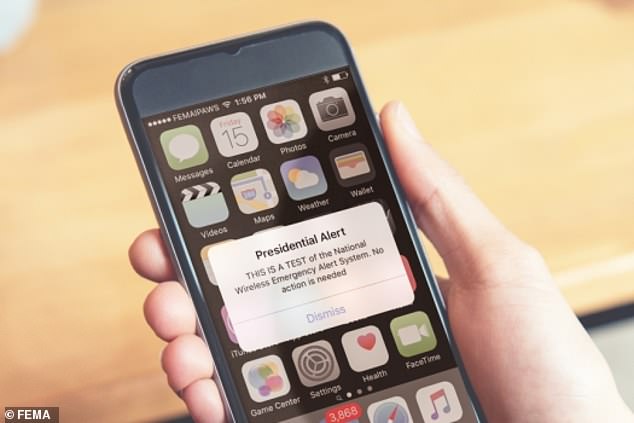 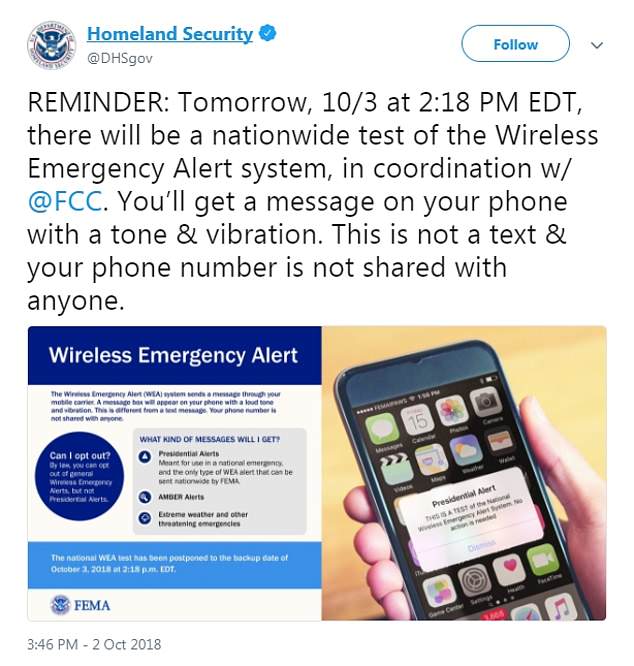 Scheduled for 2.20pm, FEMA’s experiment with the Federal Communications Commission looks at the ‘operational readiness of the infrastructure for distribution of a national message and determine whether improvements are needed’.

Users won’t be charged for the alerts and while FEMA cannot track the people who receive the messages they will be asking for feedback.

The senders also will not be able to use the data of recipients.

It’s the same kind of message that warns people of critical situations, including dangerous weather, but the test was put on hold due to a real emergency last month.

Trump’s message was initially planned for September 20 but was postponed due to Hurricane Florence.

Part of the message people across the country will get explains: ‘If this had been an actual emergency an official message would have followed the tone alert you heard at the start of this message.

‘A similar wireless emergency alert test message has been sent to all cell phones nationwide. Some cell phones will receive the message; others will not.’ 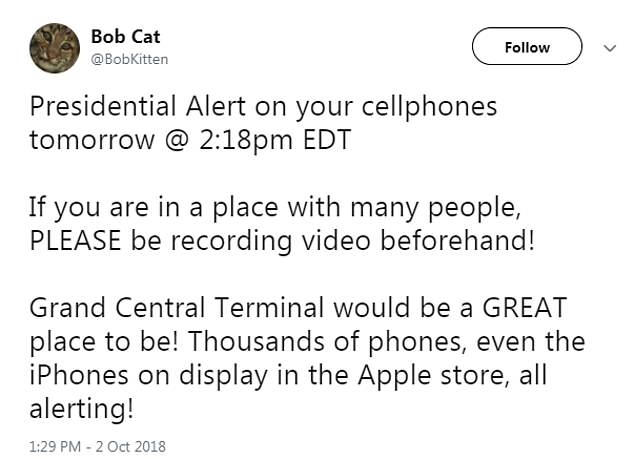 But some Twitter users were concerned the president may use the platform in the same enthusiastic way he uses social media.

‘The only Presidential Alert I want to receive pertains to a resignation.’ James Hood said.

Others were just excited to know all cell phones will be buzzing at the same time.

‘If you are in a place with many people, PLEASE be recording video beforehand!’ Bob Cat wrote. ‘Grand Central Terminal would be a GREAT place to be! Thousands of phones, even the iPhones on display in the Apple store, all alerting!’

FEMA reassured users the service will not be used for any reason other than ‘national emergencies’.