Last ditch effort to break the Brexit deadlock: Donald Tusk visits May in No 10 for crunch talks as hopes fade of a breakthrough at this week’s summit

Donald Tusk is holding talks with Theresa May in Downing Street tonight in a final effort to break the Brexit deadlock before a summit on Thursday.

The European Council President and Prime Minister are preparing for a European leaders meeting in Brussels on Thursday.

As he arrived at the talks Mr Tusk said he had been ‘moved’ by a mass protest in favour of the EU on Saturday but acknowledged Brexit was going ahead.

But hope for progress on Brexit but hopes for progress are slim with less than a year until Brexit day on March 29 next year. 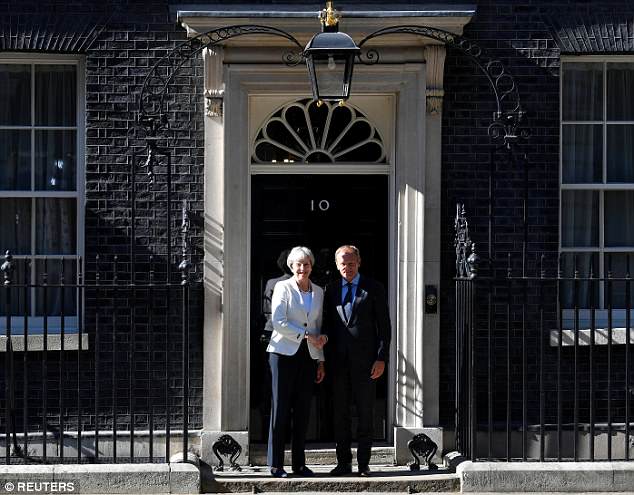 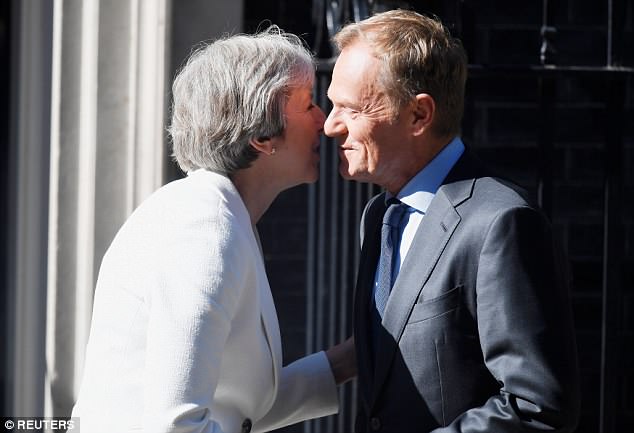 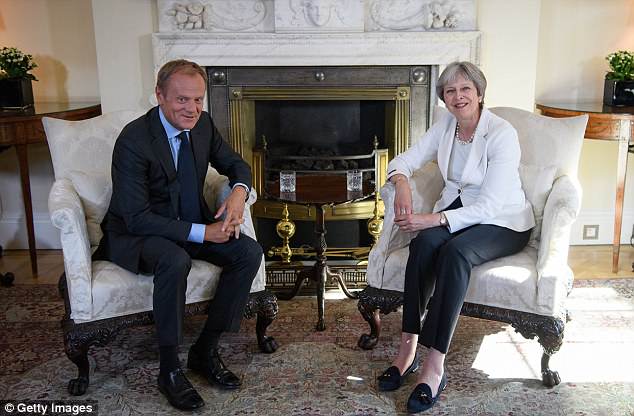 An impasse over how to run the border between the Republic and Northern Ireland has paralysed the talks for months.

Meanwhile the British Cabinet has been at war over what kind of customs deal to seek after Brexit – despite Brussels rejecting both UK models from the start.

As he arrived, Mr Tusk joked that after England’s World Cup match win on Sunday, the PM was in a ‘much better mood’ than he was.

‘It is not my intention to spoil your mood,’ he said. ‘Unfortunately we are dealing with something much more difficult than the game against Panama.’

Mr Tusk said he was ‘moved’ by the march against Brexit on Saturday.

‘I know nothing has changed,’ he said. ‘We have to continue our work on the best possible Brexit deal but I must tell you that I was very, very moved.’

Mrs May said ‘good progress’ had been made on Brexit but there was ‘more that we want to do and need to do’ on future trade and security relations. 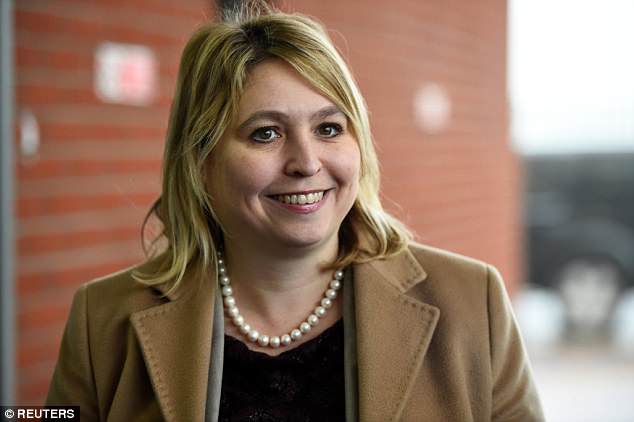 Downing Street was forced to insist today that the Prime Ministers’s preferred solution to the Irish border impasse remains on the table, despite being dismissed by a senior member of her Cabinet as ‘bureaucratic, unwieldy and impractical’.

She said it allowed her to set out the sensitivities in Northern Ireland and the need to maintain the constitutional integrity of the whole UK. 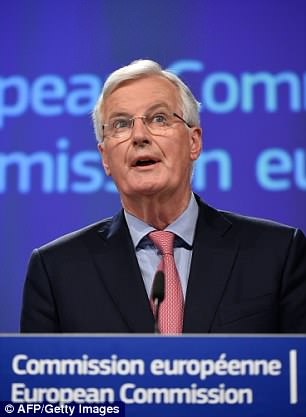 She added they were working constantly on addressing the powersharing impasse at Stormont.

‘I meet with all party leaders very regularly, and I know that there is a real desire and wish to get people back into Stormont and have that Executive in place.

‘But there are some issues we need to overcome and we are working on them.

‘I think every day we are getting closer.’

She told the BBC Mr Barnier was instrumental in the 1998 Belfast Agreement when it was first being worked on 20 years ago.

‘So I think he probably has more of an insight than many people do.’

She said ministers were working across Cabinet on all matters to make sure that they can resolve the Irish border and no border down the Irish Sea through the overall UK relationship.

‘That’s what we all want to achieve. But obviously we need to put into legal text those matters that were agreed in the Joint Report and that’s what we’re working on.’ 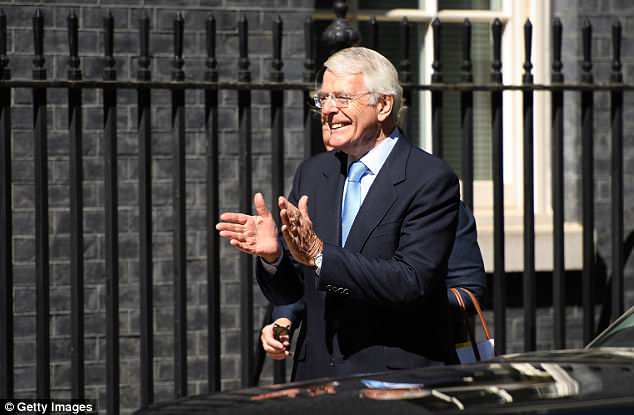 In other developments today, Sir John Major returned to Downing Street for a reception with the Queen’s Young Leaders group 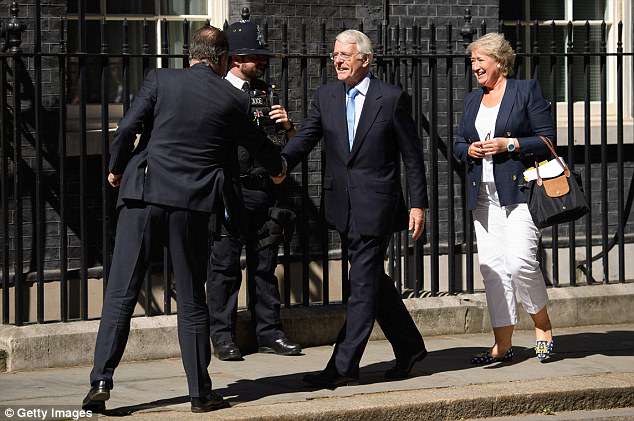 What are the options for the border between Northern Ireland and the Republic after Brexit?

Theresa May and the EU effectively fudged the Irish border issue in the Brexit divorce deal before Christmas.

But the commitments to leave the EU customs union, keep a soft border, and avoid divisions within the UK were always going to need reconciling at some stage. Currently 110million journeys take place across the border every year.

All sides in the negotiations insist they want to avoid a hard border between Northern Ireland and the Republic, but their ideas for how the issues should be solved are very different.

If they fail to strike a deal it could mean a hard border on the island – which could potentially put the Good Friday Agreement at risk.

The agreement – struck in 1998 after years of tense negotiations and a series of failed ceasefires – brought to an end decades of the Troubles.

More than 3,500 people died in the ‘low level war’ that saw British Army checkpoints manning the border between Northern Ireland and Ireland.

Both London and Dublin fear reinstalling a hard border – whether by checkpoints or other means – would raise tensions and provoke a renewal of extremism or even violence if people and goods were not able to freely cross.

The DUP – which opposed the Good Friday Agreement – is determined to maintain Northern Ireland inside the UK at all costs, while also insisting it wants an open border.

The PM has made clear her favoured outcome for Brexit is a deep free trade deal with the EU.

The UK side has set out two options for how the border could look.

Boris Johnson has suggested that a slightly ‘harder’ border might be acceptable, as long as it was invisible and did not inhibit flow of people and goods.

However, critics say that cameras to read number plates would constitute physical infrastructure and be unacceptable.

Brussels has dismissed both options as ‘Narnia’ – insisting no-one has shown how they can work with the UK outside an EU customs union.

The divorce deal set out a ‘fallback’ option under which the UK would maintain ‘full alignment’ with enough rules of the customs union and single market to prevent a hard border and protect the Good Friday Agreement.

The inclusion of this clause, at the demand of Ireland, almost wrecked the deal until Mrs May added a commitment that there would also be full alignment between Northern Ireland and the rest of the UK.

But the EU has now translated this option into a legal text – and hardened it further to make clear Northern Ireland would be fully within the EU customs union.

Mrs May says no Prime Minister could ever agree to such terms, as they would undermine the constitutional integrity of the UK.

Neither side wants a hard border between Northern Ireland and the Republic.

But they appear to be locked in a cyclical dispute, with each adamant the other’s solutions are impossible to accept.

If there is no deal and the UK and EU reverts to basic World Trade Organisation (WTO) relationship, theoretically there would need to be physical border posts with customs checks on vehicles and goods.

That could prove catastrophic for the Good Friday Agreement, with fears terrorists would resurface and the cycle of violence escalate.

Many Brexiteers have suggested Britain could simply refuse to erect a hard border – and dare the EU to put up their own fences.