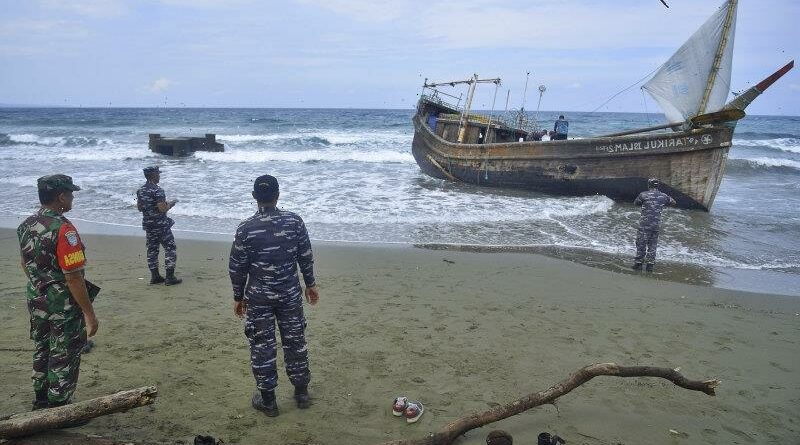 Banda Aceh: Dozens of hungry and weak Rohingya Muslims were found on a beach in Indonesia’s northernmost province of Aceh on Sunday after weeks at sea, officials said.

The group of 58 men arrived on Indrapatra beach at Ladong, a fishing village in Aceh Besar district, early on Sunday, said local police chief Rolly Yuiza Away. Villagers who saw the group of ethnic Rohingya on a rickety wooden boat helped them to land and then reported their arrival to authorities, he said. 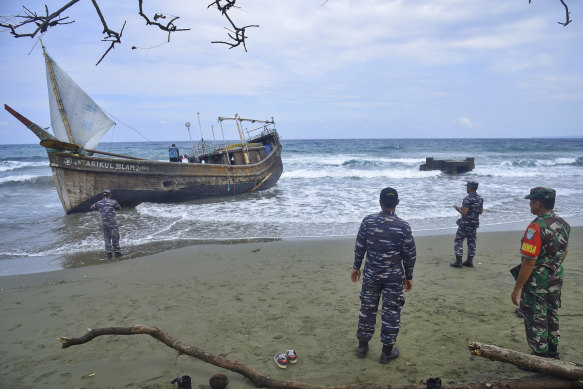 “They look very weak from hunger and dehydration. Some of them are sick after a long and severe voyage at sea,” said Away, adding that the men received food and water from villagers and others as they waited for further instructions from immigration and local officials in Aceh.

At least three of the men were rushed to a health clinic for medical care, and others are also receiving various medical treatments, Away said.

The United Nations and other groups on Friday urged countries in South Asia to rescue as many as 190 people believed to be Rohingya refugees aboard a small boat that has been adrift for several weeks in the Andaman Sea.

“Reports indicate those onboard have now remained at sea for a month in dire conditions with insufficient food or water, without any efforts by States in the region to help save human lives,” the U.N. refugee agency, UNHCR, said in a statement. 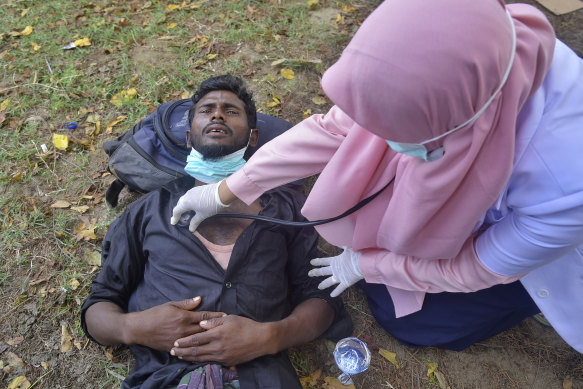 An ethnic Rohingya man receives medical treatment from a health worker after he and his group landed in Indonesia.Credit:AP

“Many are women and children, with reports of up to 20 people dying on the unseaworthy vessel during the journey.”

Away, the police chief, said it wasn’t clear where the group was travelling from or if they were part of the group of 190 Rohingya refugees that has been adrift in the Andaman Sea. But one of the men who spoke some Malay said they had been at sea for more than a month and had aimed to land in Malaysia to seek a better life and work there.

More than 700,000 Rohingya Muslims have fled from Buddhist-majority Myanmar to refugee camps in Bangladesh since August 2017, when the Myanmar military launched a clearance operation in response to attacks by a rebel group. Myanmar security forces have been accused of mass rapes, killings and the burning of thousands of homes.

Groups of Rohingya have attempted to leave the crowded camps in Bangladesh and travel by sea in hazardous voyages to other Muslim-majority countries in the region.

Muslim-dominated Malaysia has been a common destination for the boats, and traffickers have promised the refugees a better life there. But many Rohingya refugees who land in Malaysia face detention.

Although Indonesia is not a signatory to the United Nations’ 1951 Refugee Convention, the UNHCR said that a 2016 presidential regulation provides a national legal framework governing the treatment of refugees on boats in distress near Indonesia and to help them disembark.

These provisions have been implemented for years, most recently last month when about 219 Rohingya refugees, including 63 women and 40 children, were rescued off the coast of North Aceh district aboard two rickety boats.

“We urge the government of Indonesia to rescue the boats and allow them to safely disembark,” Amnesty International Indonesia’s executive director Usman Hamid said. “We also urge the Indonesian government to lead a regional initiative to resolve the refugee crisis.”

On Thursday, the UN special rapporteur on the situation of human rights in Myanmar, Tom Andrews, urged governments in South and Southeast Asia “to immediately and urgently coordinate search and rescue for this boat and ensure safe disembarkation of those aboard before any further loss of life occurs.”

“While many in the world are preparing to enjoy a holiday season and ring in a new year, boats bearing desperate Rohingya men, women and young children, are setting off on perilous journeys in unseaworthy vessels,” Andrews said in a statement.