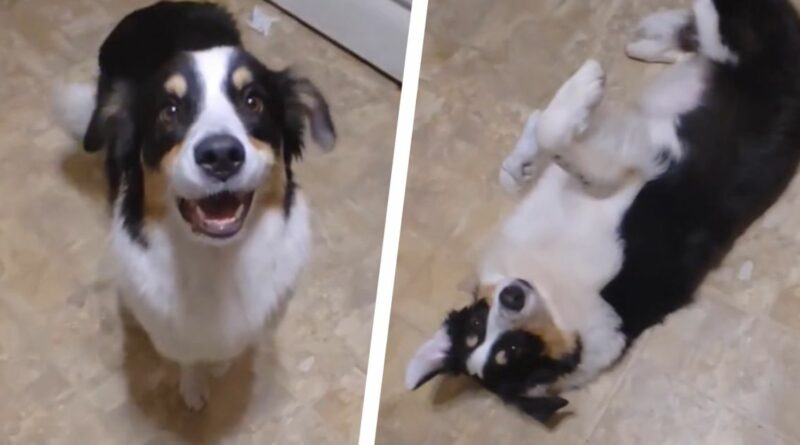 Any dog owner will know they can be real drama queens, not least when there's attention to be had out of it.

But one Australian shepherd's antics are worthy of an Oscar.

Two-year-old Shade had an injured paw and was milking it in this funny TikTok clip.

She is seen wearing a bandage on her front paw when her owner asks her to sit, The Mirror reports.

The tri-coloured pup holds up her poorly foot, which is wrapped in a bandage, before her dog mum asks: “Your leg’s broken?”

The dog nearly gives the game away as she quickly leaps up and wages her tail in the kitchen.

Her owner, a dog trainer and breeder from Massachusetts, asks the dog: “Shade, do you think you’re gonna make it? Are you dead?”

At that moment Shade dramatically flops onto her back and begins to play dead in a dramatic turn of events.

But she quickly lets her owner know she was just joking and only wants a treat.

Thevideo– posted to the @telltaleaussie account – has been viewed 746,600 times in 48 hours, with more than a thousand comments that can’t believe how dedicated she was to her acting role.

One said: “That’s a death drop if ever I’ve seen one.”

Another added: “She understood the assignment and did the extra credit too.”

“And the Dogscar for the best dramatic performance goes to Shade,” said a third.

Australian shepherds are a very intelligent working dog, bred for working on ranches, so have strong herding and guarding instincts.

The Kennel Club describes them as having ‘great stamina’ as well as being ‘loyal, attentive and animated’. And Shade certainly lives up to her breed standard.

Another adorable Australian shepherd that stole the hearts of TikTok users was called Willy.

The one-year-old pup waits until his owners say ‘grace’ before eating his dinner, and even waits to be excused from the table when he’s done.

In the video – which has amassed 4.7million views – Willy even holds his paw out at the table for his owner to hold.