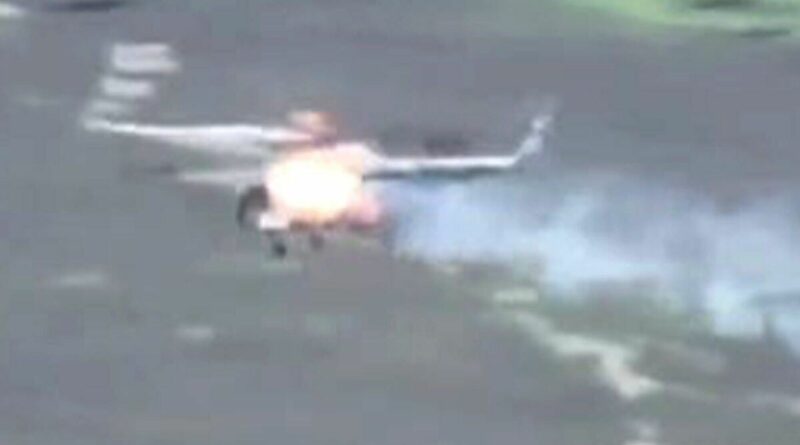 A Russian helicopter has been successfully destroyed by Ukrainian forces as it flew over a highway in the eastern region of the conflict zone, footage has shown. The Mil Mi-8 aircraft can be seen flying low to the ground over a highway near Berstove in the Donetsk Oblast before it is struck by a missile fired by the 54th Mechanized Brigade. In the footage, the helicopter can be seen exploding into a fireball before crashing into the countryside area next to the T1302 highway. The village of Berestove was liberated in July after a 10 day counter assault by Ukrainian forces, but had been heavily damaged by Russian strikes. It comes as Russia launched a series of missile attacks on cities across Ukraine on Monday in its latest response to battlefield losses.

Following the destruction of the Kerch Strait bridge from Crimea into Ukraine, the resupplying of Russian forces has been increasingly difficult.

Sweeping Ukrainian counter assaults across the eastern regions, in areas such as the location of the helicopter strike, have also destroyed scores of previously delivered Russian equipment.

Ukraine and Russia are now preparing for a colossal battle for the strategic city of Kherson in the south, located by the Dnipro River.

The latest battlefield updates came as air raid sirens blared across Ukraine and explosions rang out in Kyiv.

Black smoke was seen billowing into the sky as Russia rained missiles down in renewed air attacks.

Ukraine’s military said it had shot down 44 of 50 Russian missiles but strikes left 80 percent of Kyiv without running water, authorities said, adding they hoped to restore it quickly. Two people were reported injured in the Kyiv region.

The US ambassador to Kyiv, Bridget Brink, tweeted: “Like millions of Ukrainians, our @USEmbassyKyiv team is once again taking shelter as Russia continues its callous and barbaric missile strikes on the people of Ukraine in an effort to leave the country cold and dark as we approach winter.”

For the past three weeks, Russia has been conducting a campaign of attacks on Ukrainian civil infrastructure using expensive long range missiles and cheap Iranian-made “suicide drones” that fly at a target and detonate.

In Ukraine’s second largest city Kharkiv, the strikes had caused a blackout that left trolleybus driver Ihor Polovikov stranded in his electric cable-powered vehicle on the roadside.

He was fed up, he said, adding: “But nobody will give up just like that. We got used to it, it’s the ninth month. Everyone has understood that this is necessary.”

Meanwhile, ships brought grain from Ukrainian ports on Monday, suggesting Moscow had stopped short of reimposing a blockade that might have caused world hunger, despite suspending its participation in a UN programme to safely export grain from the war zone.

International officials had feared that Moscow would reimpose a blockade on Ukrainian grain after Russia announced on Saturday that it was suspending its role in the UN-backed programme in retaliation to a devastating incident that immobilised some of their Black Sea fleet over the weekend.

But on Monday, Ukraine confirmed that 12 ships had set sail. The 354,500 tonnes of grain they carried was the most in a day since the programme began, suggesting a backlog was being cleared after exports were interrupted on Sunday.