Home » World News » Dramatic video shows huntsman spider and gigantic wasp battle to the death.. so who do you think wins?

THIS is the incredible moment a huntsman spider goes head-to-head with a gigantic wasp in a fight to the death.

Dramatic footage of the battle between the two huge creepy crawlies was captured by an Australian family on Christmas Day. 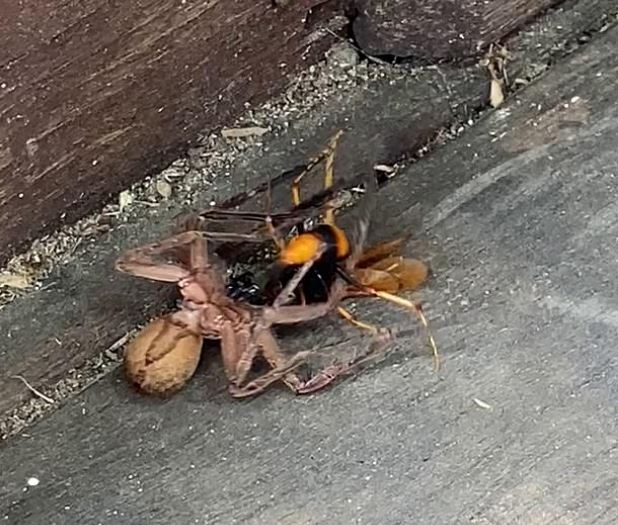 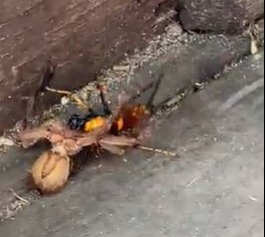 They were enjoying a festive lunch in the garden of their Sydney home when the struggle grabbed their attention.

In the captivating clip, one family member can be heard asking "who's winning" as the fight unfolded in front of their eyes- with the huntsman becoming pinned down on its back.

The wasp then stings its spider opponent several times, as the family gasp "oh no", with one commenting "we can't interfere with nature".

After a short – but dramatic – battle, the wasp claims victory after killing the huntsman with multiple stings.

One family member can be heard saying "it's done, it's done, the legs are curling".

But the wasp didn't escape the battle unscathed, as it can be seen limping away with an injured leg.

The family member who uploaded the amazing clip wrote: "Me and my family were enjoying our lunch outside, when just out of the corner of my eye, I spotted a large huntsman spider lunge out of the near by bush and on top of a wasp that was stalking it.

"Just as they started to fight each other to the death, I got my phone out and managed to capture the whole event!"

Just last month, a woman shared the terrifying moment she uncovered a massive huntsman spider with dozens of its babies behind a painting in her kitchen.

The Aussie posted the frightening footage of the spider to TikTok with the caption: "Only in Australia."

Huntsman spiders are widespread across Australia and are famed for their intimidating size, with males able to reach a leg span of between 25 to 30cm.

The creatures live in warm tropical climates across the world in places such as Australasia, Asia, Africa, the Americas, and the Mediterranean Basin.

Their diet mainly consists of insects but they are also known to eat small reptiles such as skinks and gekkos. 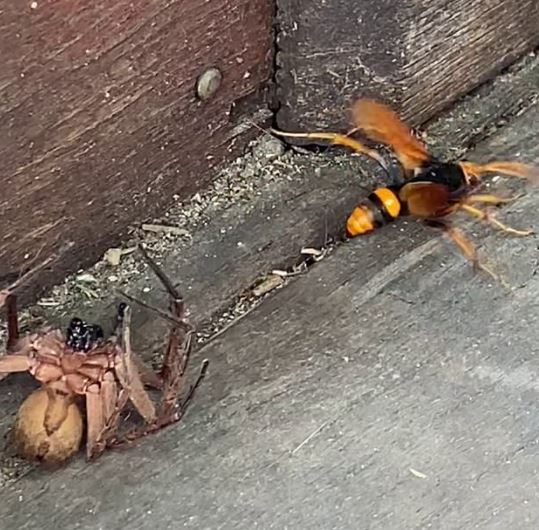 Photos of a terrifying Huntsman spider took the internet by storm in 2016, after the critter was found on a farm in Queensland, Australia.

And people's fears were reignited after a monster spider the size of a dinner plate went on the loose in a terrified couple's home in Queensland in 2017.

Huntsman spiders use venom to stun their prey and to aid in digestion.

The enormous creepy crawlies need warm temperatures to survive and so they are not found in the wild in the UK.

However, in 2017, a huge 18cm beast was discovered lurking in a shipping container at a removals firm in Mertsam, Surrey.

The spider had hitched a ride with a family's belongings from Brisbane, Australia, to the UK.