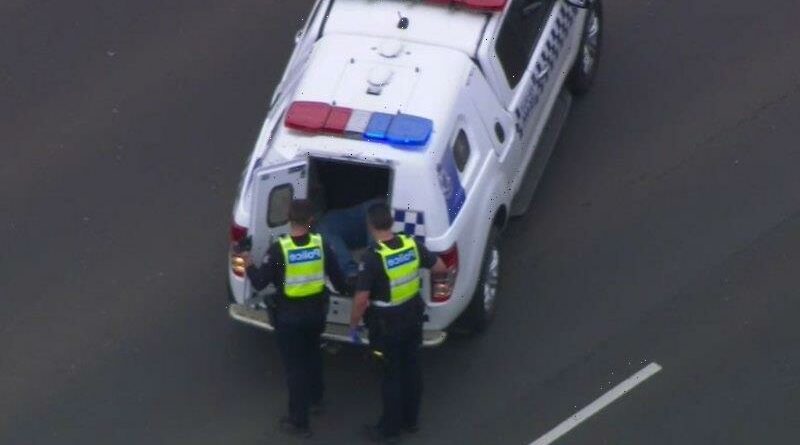 A man has been arrested and charged after a woman fell from a car that he was driving along the Princes Freeway, outside Melbourne, on Sunday.

David Fosita, 28, has been charged with criminal damage over the incident, which left his 30-year-old passenger fighting for her life. 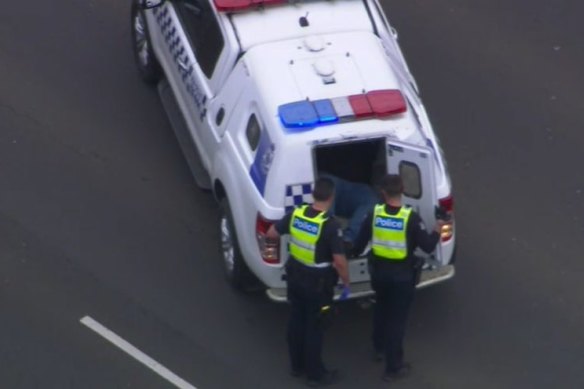 An aerial shot of police at the incident.Credit:Nine News

Police said the woman came out of the Honda sedan while it was travelling outbound on the freeway before Little River at about 11.30am on Sunday.

She was flown to The Alfred hospital by air ambulance with head and body injuries and remained in a critical condition on Monday.

Fosita stopped at the scene and spoke with police while first responders provided assistance to the woman.

Aerial images obtained by Nine News showed the road closed to traffic while police collected evidence and spoke to witnesses.

In one image, a man could be seen talking to three officers on the side of the road before being led into the back of a police vehicle.

Fosita appeared in Sunshine Magistrates’ Court on Monday afternoon. He began a bail application that will continue on Tuesday.

The Princes Freeway was closed outbound for several hours on Sunday, with the traffic bumper-to-bumper across all four lanes in some sections, including the emergency lane.

Motorists reported being stuck in traffic for several hours, with one driver saying he had spent eight hours travelling from Werribee to Colac and back, a trip that would usually take three hours.