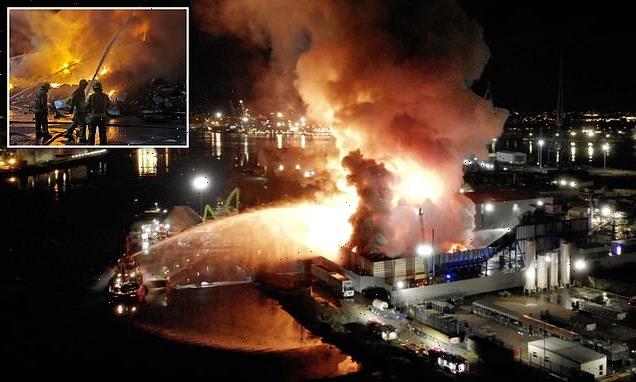 Firefighters in Belfast are still battling to put out a blaze at a scrap metal recycling business that started yesterday afternoon.

Drone footage captured last night revealed the extent of the inferno, as it raged and sent great plumes of smoke billowing across the city.

The fire broke out Tuesday afternoon in the Queen’s Road area of Belfast Harbour Estate, with crews scrambled to the scene at 1.33pm.

A statement posted on their Twitter page said: ‘Significant resources continue to respond to the incident.

A fire that broke out at 1.33pm on Tuesday afternoon in the Queen’s Road area of Belfast Harbour Estate is still burning almost 24 hours later, with drone footage last night capturing the immensity of the conflagration

‘Local residents are being asked to remain in their homes and to keep doors and windows closed.

‘Motorists are advised to avoid the area.’

NIFRS said they had sent ‘9 pumping appliances, 4 special appliances, 2 tugs from Belfast Harbour and a total of 54 personnel’ to tackle the conflagration. 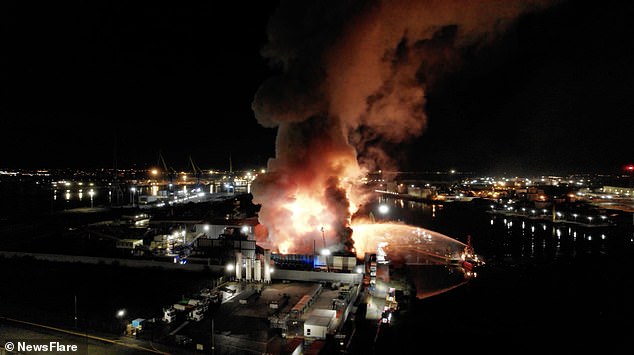 NIFRS deployed 54 personnel to tackle the blaze overnight, according to a statement from the fire brigade

The drone footage shows how the enormity of the fire dwarfed the high-pressure hose, as its sends a stream of water shooting from a tug boat in the harbour.

In the 44-second clip, sirens can be heard wailing as police and the fire service attended the emergency.

Metal fires can reach temperatures of over 3000°C, according to fireengineering.com.

A unique characteristic of metal fires is the colour of the smoke, which tends to be a white to greyish colour.

In metal fires, smoke appears to billow at a much higher velocity, because of the high burning temperatures of metals.