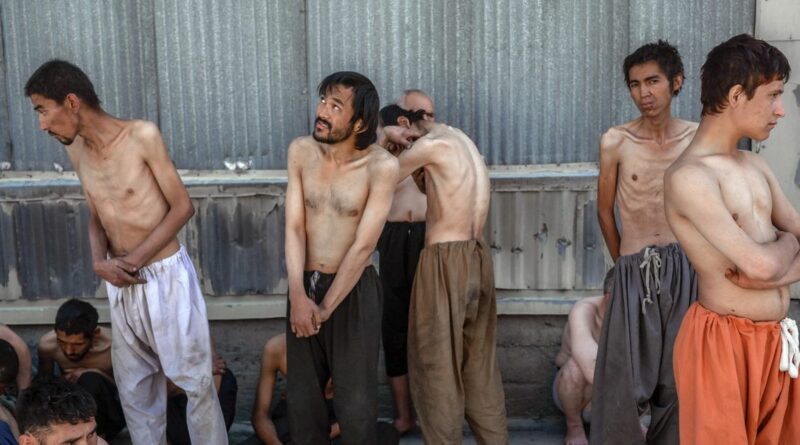 Starving drugs addicts claim some of them have turned to cannibalism in Afghanistan following the Taliban's takeover.

It comes as thousands of homeless addicts have been taken off the streets and made to go cold turkey while living in inhumane conditions inside a "hospital".

The round-up was one of the terrorist groups promises to wipe out drug addiction, but what they failed to mention was that the hospital was more like a concentration camp.

The barbaric conditions are reportedly so bad that beds are shared between three people and inmates are forced to eat grass, cats and even each other, in a bid to survive.

Inmates said some people were killed before they had even reached the hospital, with one claiming that nine of his friends were set for execution in jail before others were locked away.

Abdul, an inmate at the clinic, said people drop dead from hunger and claimed it was normal for "patients" to go days without eating.

"People ate cats out in the park yesterday. One cut off the cat's head and ate it," he told Danmarks Radio, when reporters visited on January 16.

A recovering addict told Danish journalists: "They killed a man and made a fire. They took his intestines and ate them."

Doctors who run the clinic reportedly haven't been paid for several months and are unaware of when this will change, reports Daily Mail.

Abdul said the food was always sparse but said they at least used to get half a loaf of bread, but now they have even been stripped of that.

The 'hospital' that was visited by journalists in Kabal, was housing 3000 addicts despite only having enough beds for 1000 people, with more inmates expected to arrive.

It has been reported that Afghanistan is the world's largest supplier of illicit opium and heroin with taxes from opium profits and direct exporting being the main means of income for the Taliban.

According to U.N. officials, the Taliban probably raked in over $400million between 2018 and 2019 from the drug trade.

The accessibility has led millions of Afghans to become addicts but since the Taliban's recent take over they have pledged to help put a stop to drug addiction.

But despite the vast amount of evidence about the conditions in the facility, Hasibullah Ahmadi, head of the Taliban's anti-drugs office, denied inmates claims.

"These people are sick and do not know what they are saying," Ahmadi said.

For all the latest Daily Star news, sign up for one of our free newsletters here.