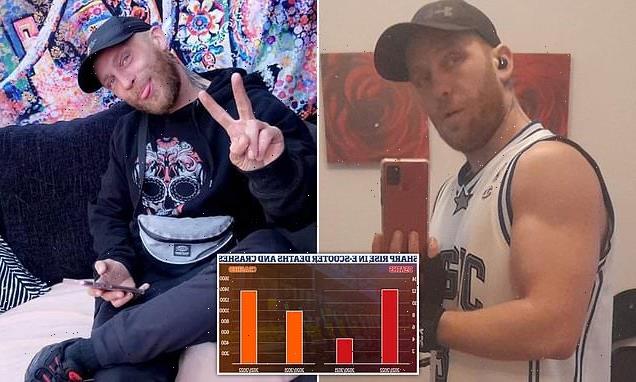 A drugged-up labourer has been banned from driving all motor vehicles for a year after being caught riding his e-scooter on a pavement while high on cannabis.

Roads menace Colin Moore, 38, was stopped by police after he was seen weaving on and off the pedestrian walkway with mysterious white powder around his nose. A court heard he suffered a seizure as he was ordered to give a blood test.

A reading showed Moore, from Southport, Merseyside, had 2.5 micrograms of tetrahydrocannabinol (THC) per litre of blood. THC is the principal active ingredient in cannabis and the legal drug drive limit is 2mcg/l.

At Sefton Magistrates’ Court Moore admitted drug-driving and was disqualified for 12 months. 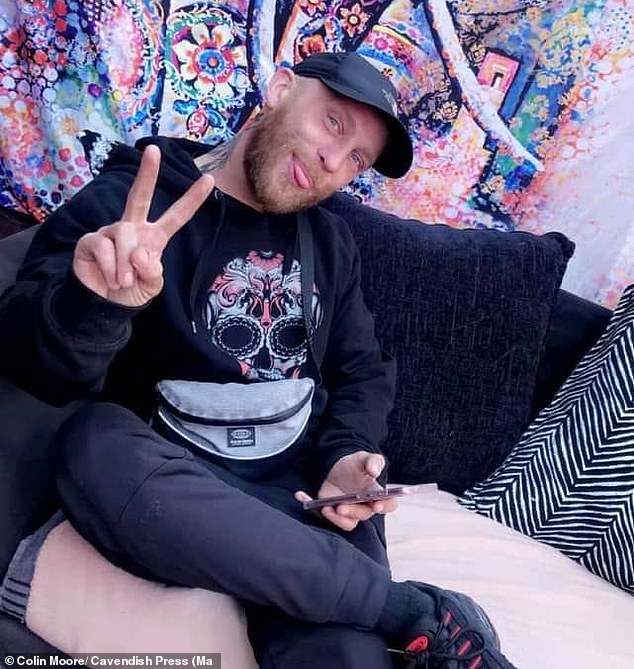 Poser: Colin Moore, 38, has been banned from driving all motor vehicles for a year after being caught riding an e-scooter while high on drugs. He is pictured giving a ‘peace sign’ 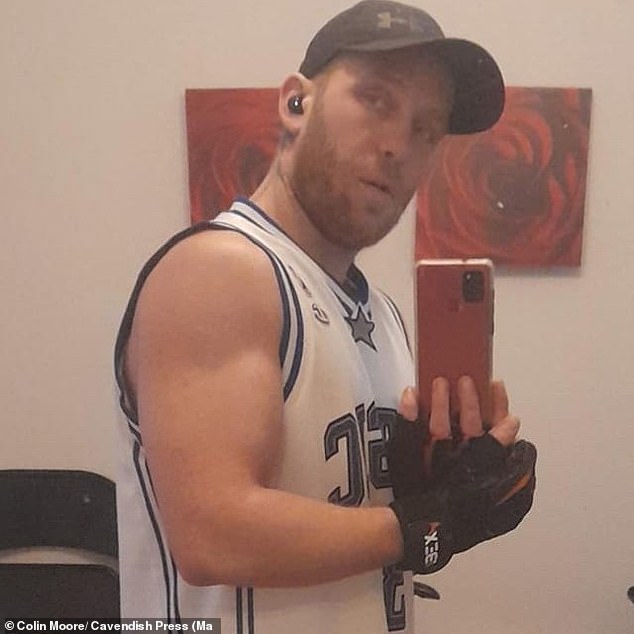 A court heard the 38-year-old (pictured) of Southport had a mysterious white powder around his nose and that, when ordered to give a blood test by police, suffered a seizure

The incident occurred in July this year when Moore was riding his 30mph electric machine through the streets of Bootle.

It comes as Britain faces a sharp rise in the number of people killed during e-scooter crashes, with the number of fatal collisions tripling in a year.

Lionel Cope, prosecuting, said: ‘He was seen to be riding an electric scooter erratically on the pavement. Officers continued to watch him as he went on the road and then back onto the pavement again before coming to a stop,

‘It was noticed he had some white residue around his nose. He was tested for drugs at the roadside and a further blood test reading was 2.9mcg for tetrahydrocannabinol. He has six previous convictions.’

In mitigation defence lawyer Grahame Halliwell said: ‘He suffered a seizure and an ambulance was called. He then suffered a further seizure. He was unconscious when they took blood but he does not seek to challenge the procedure.

‘He works as a labourer but work is quiet at the moment. He’s been referred to the Walton Neurological Centre to see if it can be established as to why he had the seizure that he had. He’s never had one before.’ 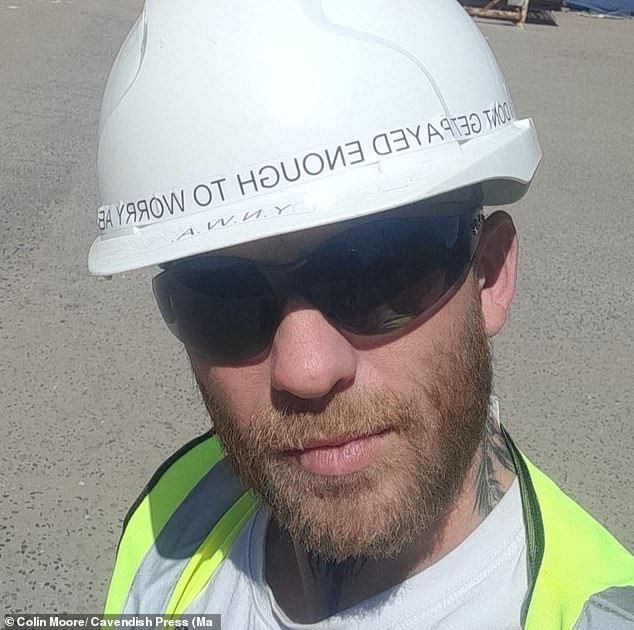 Labourer Moore (pictured in a hi-vis) had 2.5 micrograms of tetrahydrocannabinol (THC) per litre of blood. THC is the principal active ingredient in cannabis and the legal drug drive limit is 2mcg/l 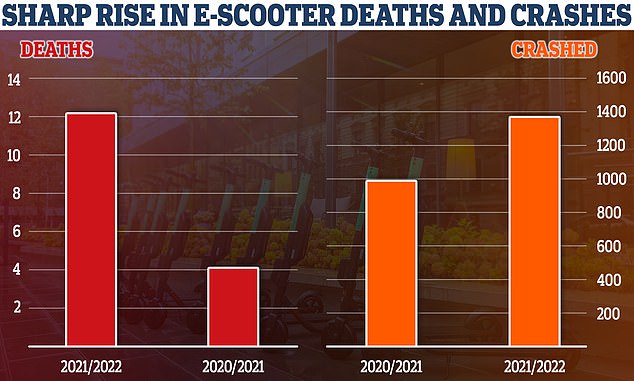 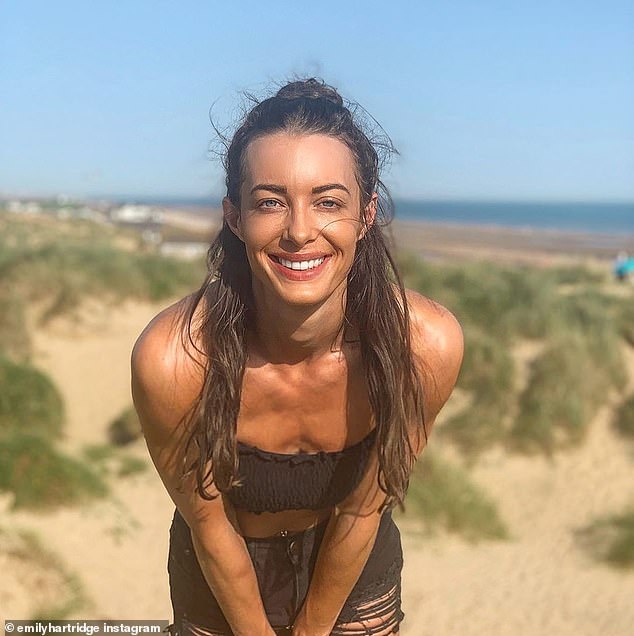 In 2019, Channel 4 and YouTube star Emily Hartridge (pictured) was killed in what was believed to be Britain’s first fatal electric scooter accident

Moore was also fined £80 and ordered to pay £152 in costs and a victim surcharge.

The sentencing comes just days after fresh government data revealed the number of deaths and crashes caused by e-scooter rider had ballooned over the past year.

E-scooter deaths TRIPLE in a year

Stats show that in the year to June there were 12 deaths involving e-scooters and a whooping 1,349 crashes.

This compares to four deaths the year before as well as 978 crashes – a significantly less number. Some 11 of the 12 deaths were e-scooter users while one was a pedestrian.

In 2019, Channel 4 and YouTube star Emily Hartridge was killed in what was believed to be Britain’s first fatal electric scooter accident.

The 35-year-old slammed into a lorry while riding an e-scooter near her home in Battersea, south London.

In July, a three-year-old toddler was left with ‘life-changing’ injuries after being mown down by a young man on an e-scooter.

The smash took place while the little girl was out walking in Myatt’s Field Park, Lambeth, in south London.

The Metropolitan Police said the male stopped to say sorry. But the toddler’s condition later deteriorated and she was rushed to hospital.

It prompted an appeal by detectives for the man to hand himself in and ‘do the right thing’, with the Met saying the child’s injuries were ‘life-changing’.

In the same month, 80-year-old grandmother Sarah Carter was left with a broken wrist, a cracked jaw and cheekbone after she was knocked to the ground by an e-scooter. 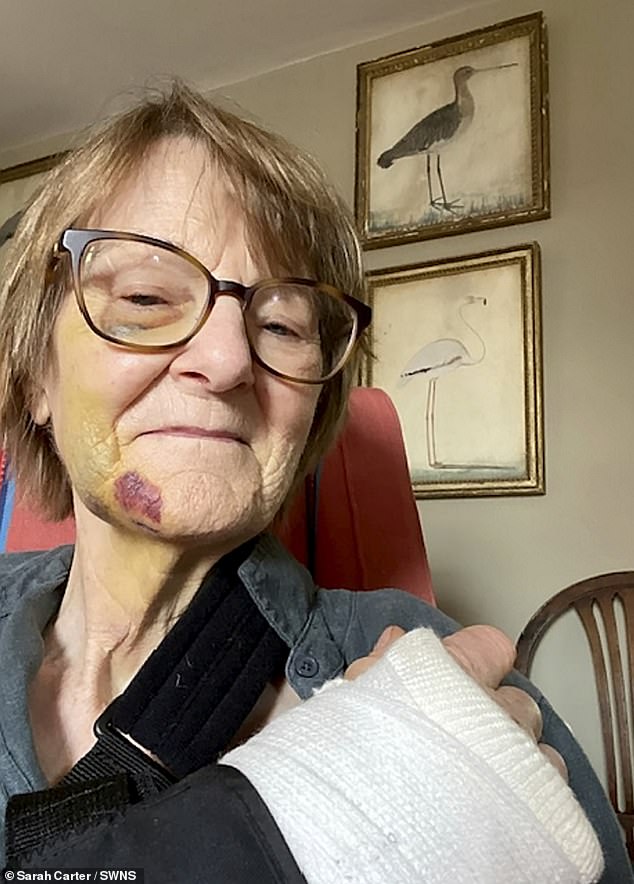 Sarah Carter, 80, suffered a broken wrist, a cracked cheekbone and jaw after being struck by an e-scooter in Canterbury, Kent

She labelled the e-scooters ‘lethal’ and branded the council ‘irresponsible’ for the lack of infrastructure put in place.

After her accident, she said: ‘Another elderly person could have quite easily been even more seriously injured or even killed.’

And in August, a woman in Hull was left with a fractured skull after being hit by an e-scooter while she was riding down a one-way street on her bike.

Such is the danger of electric scooters, bosses at Transport for London (TfL) banned them in December 2021, after one exploded on a packed tube.

It was one of many close calls which caused TfL to launch an urgent review, supported by evidence from the Brigade’s experts. 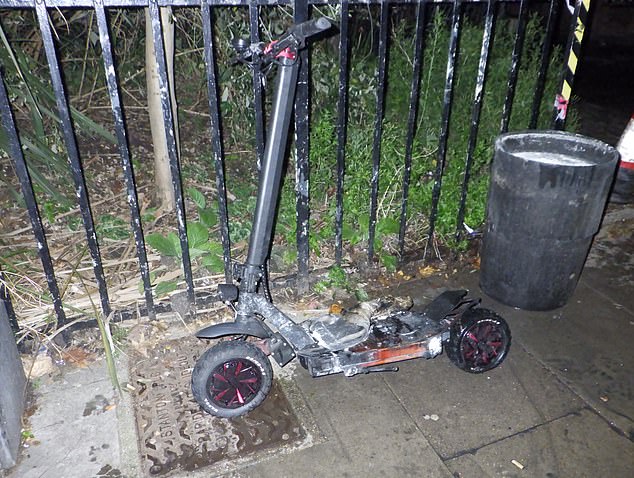 E-scooters were also banned from TfL in December, 2021, after one exploded on a packed tube

The latest government figures showed that 346 of the crashes included only one e-scooter with no other vehicles involved – a sharp rise from 200 the year before.

Of all the casualties, 1,095 were e-scooter users compared to 811 in the year before. And 429 were seriously injured.

In July, 80-year-old grandmother Sarah Carter was left with a broken wrist, a cracked jaw and cheekbone after she was knocked to the ground by an e-scooter.

Government guidance states there is no separate law governing the use of ‘power transporters’, such as e-scooters, which means that they are covered by the same laws as motor vehicles.

It is still illegal to use private e-scooter on roads, though legislation is expected to be enacted next year to permit their use. B

What are the laws on e-scooters?

Renting an e-scooter is the only way to legally ride the vehicle on some public roads or in other public place at the moment.

But the controversial vehicles could be approved for use across the UK following a trial period. Currently, 10 London boroughs are taking part in the scheme with three providers to test how e-scooters work on the capital’s roads.

Riding e-scooters on the pavement however is banned, and riders must be 18 or over and have a full or provisional driving licence to rent one.

It is also illegal to use privately owned e-scooters or other powered transporters on public roads.

Relevant laws on e-scooter use include:

On public roads, anyone using a privately owned e-scooter or other powered transporter is likely to be committing at least one of a number of offences such as driving a motor vehicle with no insurance. You could be liable for a fixed penalty of £300 and six points on your driving licence

On pavements, it is generally an offence to drive a motor vehicle, and this applies at all times to e-scooters and powered transporters

E-scooters rented from the TfL scheme will be permitted to ride on London’s public roads and cycle infrastructure in participating boroughs.

These boroughs will designate no-go areas where e-scooters cannot be ridden and will come to a safe stop, as well as go-slow areas, where the speed of e-scooters will be reduced to 8mph