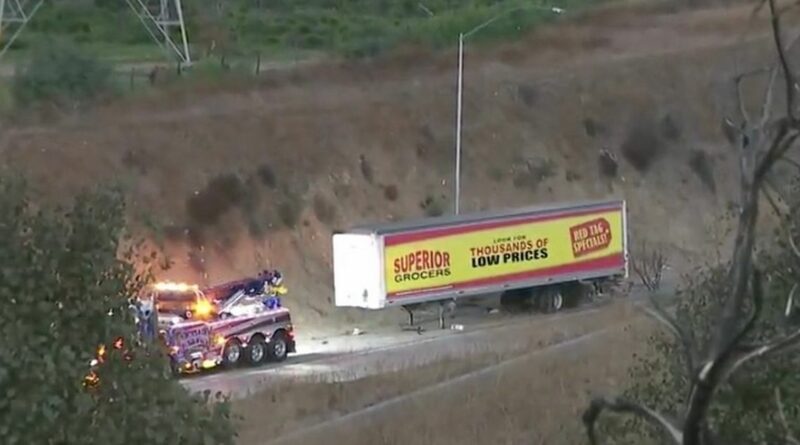 A speeding driver who police believe was intoxicated was decapitated along with his younger female passenger after crashing into a lorry on the freeway in Los Angeles.

The horrific crash occurred just before 1am on the 405 Freeway on Sunday.

The medical examiner's officer identified the driver as Juan Carlos Menjivar, 38, and his passenger was identified as Ana Elena Santos, 22.

Both are believed to have lived in the local area.

Police said Menjivar was driving a 2010 Lexus Sedan when he "failed to maintain the curve in the roadway before traveling out of control" and smashed into the back of a parked big rig, KTLA reported.

The pair were tragically pronounced dead at the scene of the crash with both of their bodies decapitated, a spokesperson for the LA County Medical Examiner told Dailymail.com.

The driver of the big rig told the Los Angeles Times that the sedan caught fire after the collision.

Police believed that alcohol and excessive speed were the main factors in the collision.

The lorry driver was not hurt in the collision.

In other tragic news, a car has driven into a group of children in a school car park, leaving several of them injured.

One child was taken to hospital with serious injuries after the collision in Ardingly, Surrey, around 4.30pm.

Four others are being treated for minor injuries at Ardingly College after getting trapped underneath the car, The Argus reports.

The vehicle, believed to be a Tesla, has been taken from the scene on the back of a lorry.

A South East Coast Ambulance Service spokesman said: “We currently have a number of ambulances at the scene of an RTC in College Rd, Ardingly.

“Our crews are treating a number of patients but we are unable to provide further details at present.”