A French airforce eagle designed to claw drones out of the sky attacked a five-year-old girl dressed in white because she looked like one of the aircraft.

The drama took place in the picturesque Col d’Aubisque – a mountain pass in the Pyrenees close to the South West town of Tarbes.

‘The child was enjoying a picnic with four other children and a woman looking after them when the eagle struck,’ said an investigating source.

‘All the children were by the Saint-Antoine chapel in the Col d’Aubisque during the Spring school holidays. 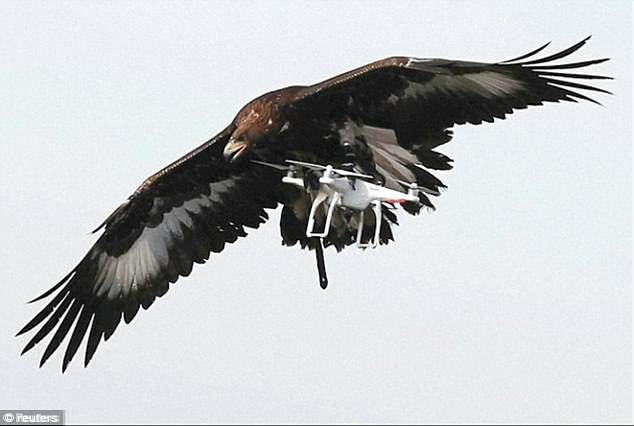 The eagles have been trained to swat drones out of the sky by the French air force. It is feared terror groups could strap explosives to the devices. 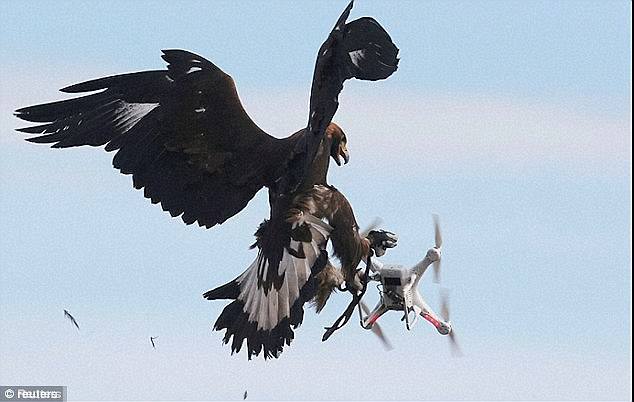 The eagles are called Athos, Porthos, Aramis and D’Artagnan, after the French author Alexandre Dumas’s Three Musketeers and their trusty sidekick, but the air force would not reveal which one attacked the child

‘Swooping out of the sky, the bird clawed the girl, whose white clothes made her look just like the drone the eagle was trained to intercept.

‘She might also have been mistaken for a rabbit, but it’s far more likely the eagle thought she was a drone!’

The girl suffered minor injuries in the incident in April, and all those involved were in ‘severe shock and panic’ the source added.

Carole Aguerre, who was in charge of the party, made a formal complaint to the French military.

They confirmed that the eagle was one of four birds being trained at the 118 Airforce base at Mont-de-Marsan, which is some 80 miles north of Tarbes. 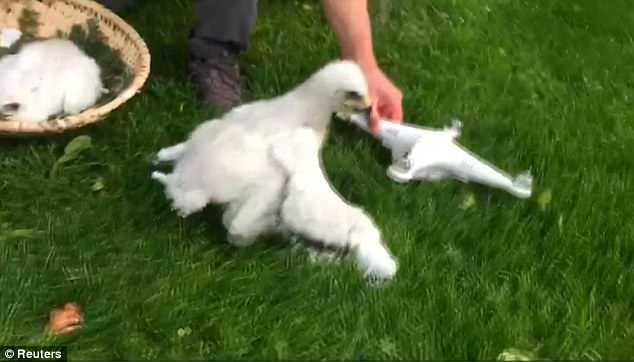 Airforce personnel apologised profusely, but under an agreement with the town of Musculdy, close to where the incident took place, the training of the birds has continued.

Ms Aguerre, who is from Saint-Just-Ibarre, has expressed her disgust at this, saying that the eagles should not be allowed to take part in manoeuvers during school holidays.

The eagle involved is one of four Golden Eagles recruited by the French air force to bring down remote-controlled drones when they stray into unauthorised airspace.

The eagles are called Athos, Porthos, Aramis and D’Artagnan, after the French author Alexandre Dumas’s Three Musketeers and their trusty sidekick, but the air force would not reveal which one attacked the child.

It is feared that terror groups could use drones packed with explosives to target people and buildings.

Training eagles to deal with threatening drones is far safer than using bullets to shoot them down.

Air force general Jean-Christophe Zimmerman said: ‘These eagles can spot the drones several thousand metres away and neutralize them.’

Before they hatched, the eagles were placed on top of drones, and then kept there during their early feeding period.

Eagles have a grip 10 times more powerful than a human, making them ideal to deal with large unmanned drones.

Drones have been branded a ‘credible threat’ by security experts in France, after being flown over the Elysée Palace and other high-security buildings in Paris.