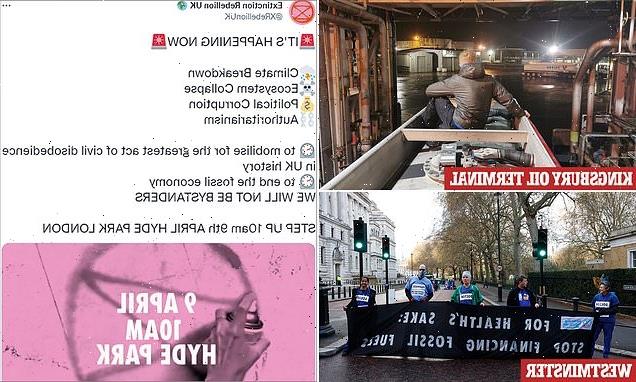 Environmental protesters caused disruption at oil facilities for the seventh day in a row today as 35 activists entered a terminal and climbed on top of tankers and a loading bay before locking themselves onto pipework.

At least ten of the group from Just Stop Oil were arrested this morning over the protest at Kingsbury oil terminal in Warwickshire which began at 0.40am as they try to impact fuel availability at petrol pumps across England.

The group said more than 400 activists have now been arrested over the protests which began last Friday as they continue to disrupt oil facilities amid demands that the UK Government ends all new oil and gas projects in Britain.

Just Stop Oil – which is linked to the larger Extinction Rebellion group, whose demonstrators have also been taking part in the past week’s protests – said it had also set up a roadblock today at an entrance to a nearby BP oil depot.

The group said operations at the Navigator oil terminal in Grays, Essex, were still suspended due to its occupation – and it comes ahead of the planned daily ‘mass participation’ protests from London’s Hyde Park this Saturday.

Extinction Rebellion has warned that these protests will be ‘more disruptive than ever’ and they are ‘expecting huge numbers’, adding: ‘We won’t have pink boats, we won’t have pink tables, we will just have people power.’

Also this morning, a group of protesters from the ‘Doctors for XR’ offshoot held a demonstration outside the Treasury building in Westminster in protest against fossil fuel finance and subsidies. They wore labels on their blue and green scrubs saying ‘Doctor – protesting for public health’ and held banners saying: ‘Clean energy, less war’.

Meanwhile, UK motorists continue to suffer at the pumps with petrol prices hitting record levels in recent weeks after Brent crude oil hit a high of $128 last month – up from lows of $19 seen at the peak of the pandemic. 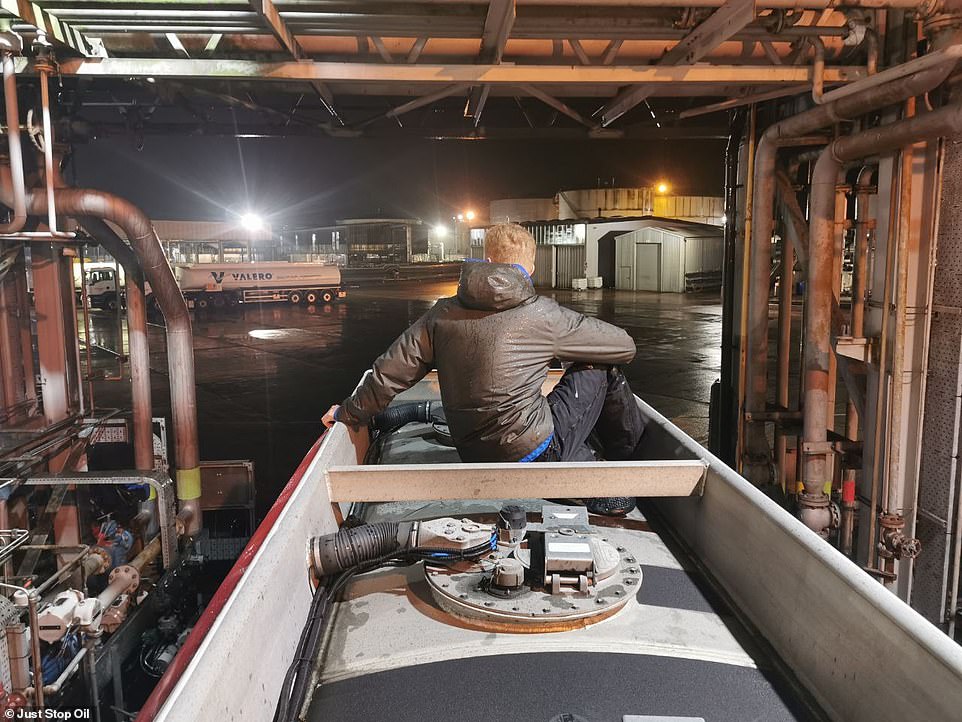 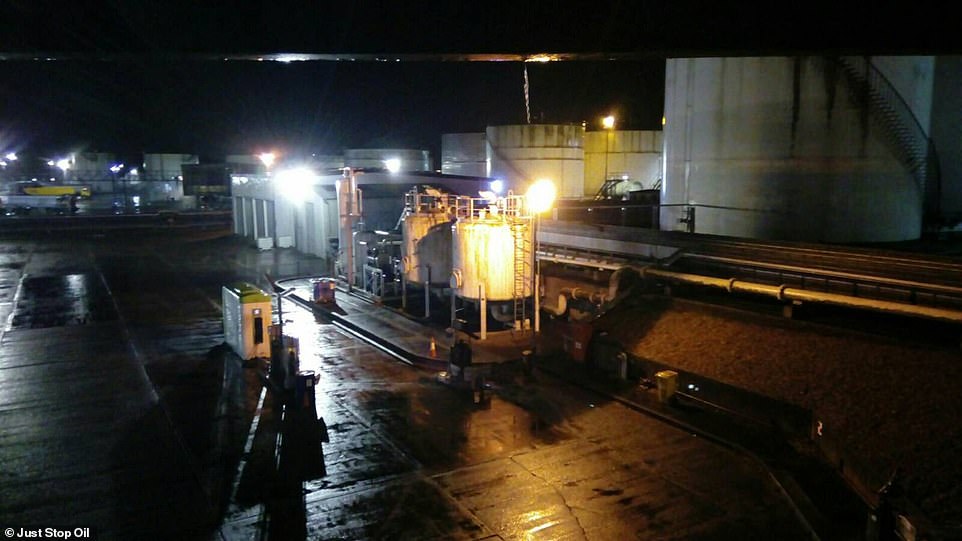 Eco protesters caused disruption for the seventh day in a row as they went to the Kingsbury oil terminal, pictured today 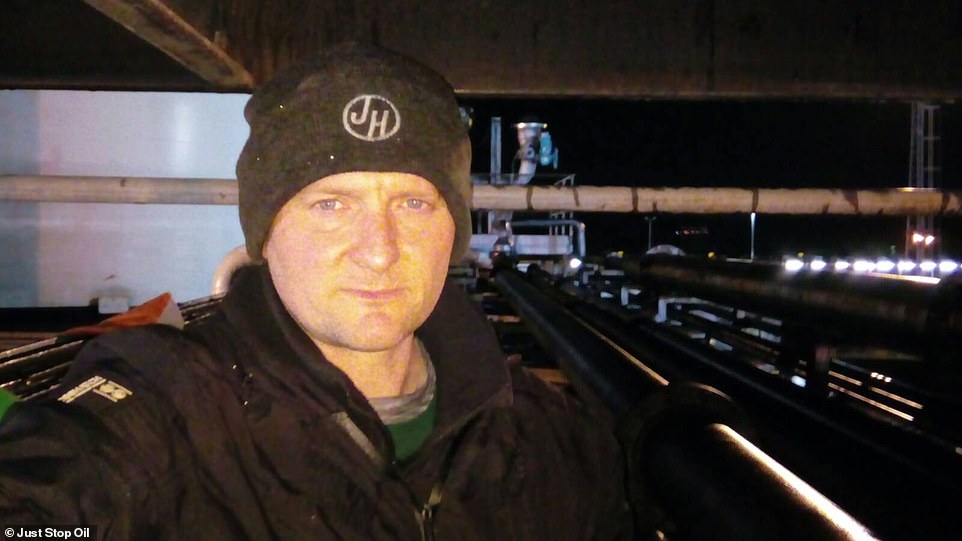 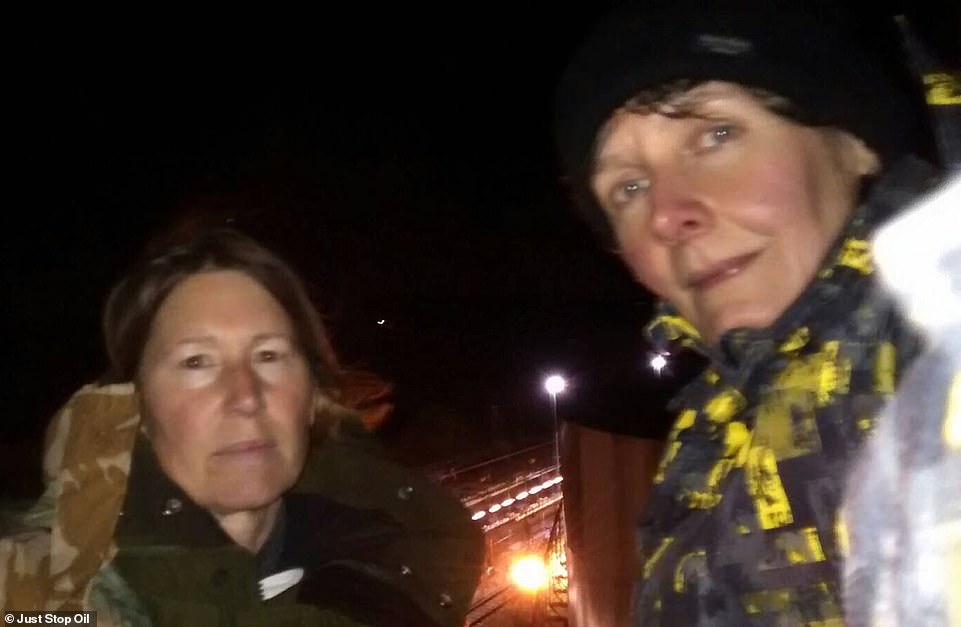 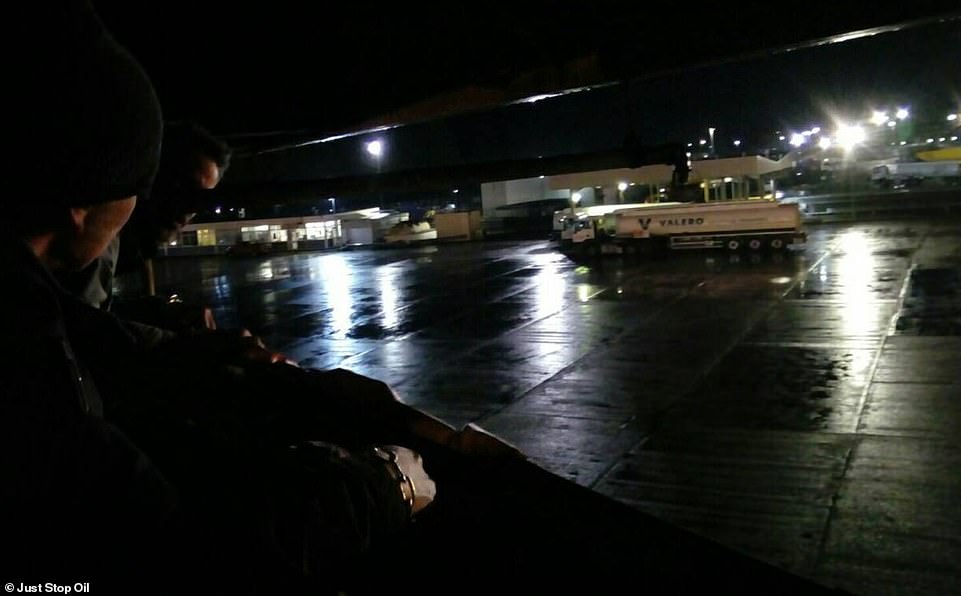 Just Stop Oil said today: ‘The latest IPCC (Intergovernmental Panel on Climate Change) report issued on Monday made clear that staying below 1.5C is now a fairy tale, what is now at stake is humanity’s survival, a liveable planet.

‘Its message was clear: any further delay in implementing rapid and deep carbon cuts will result in the death of millions.’

The Government has promised to take back control of energy prices through boosts to nuclear, wind, solar and hydrogen in its long-awaited energy strategy.

Ministers are promising ‘cleaner and more affordable energy’ to be made in this country, aiming to make 95 per cent of electricity low carbon by 2030.

But Labour said the Prime Minister had ‘caved to his own backbenchers’ and that the plan would do nothing to help the rising energy costs faced by households.

Boris Johnson said the strategy, including new nuclear and offshore wind plans, would reduce the UK’s dependence on foreign sources of energy.

There has been particular worldwide concern about the reliance on Russian oil and gas since the Kremlin’s invasion of Ukraine.

Under the Government’s fresh plans a new body, Great British Nuclear, will be launched to bolster the UK’s nuclear capacity with the hope of up to 24 gigawatts (GW) of electricity by 2050 coming from the source of power, 25 per cent of the projected electricity demand.

It is hoped the focus on nuclear will deliver up to eight reactors, equivalent to one reactor a year instead of one a decade. The strategy also confirmed the intention to push ahead with a nuclear project at the Wylfa site on the island of Anglesey, off the north-west coast of Wales.

Mr Johnson said: ‘We’re setting out bold plans to scale up and accelerate affordable, clean and secure energy made in Britain, for Britain, from new nuclear to offshore wind, in the decade ahead. This will reduce our dependence on power sources exposed to volatile international prices we cannot control, so we can enjoy greater energy self-sufficiency with cheaper bills.’

The rocketing energy bills faced by families have been caused in part by a post-pandemic rise in demand for gas, with lower levels of production. This was only exacerbated by the war in Ukraine both due to energy supplies but also the production of wheat and some metals.

On offshore wind, the plan outlines the ambition of producing up to 50GW of energy by 2030, which the Department for Business, Energy and Industrial Strategy (Beis) said would be more than enough to power every home in the UK.

Some 5GW should come from floating offshore wind in deeper seas and planning reforms will slash approval times for new wind farms from four years to one year.

It is thought a major crunch point in the strategy, and one of the reasons its launch has been delayed, is wrangling over onshore wind farms.

Several ministers have aired views backing the development of new oil and gas, but not onshore wind, which is one of the cheapest forms of electricity, along with solar.

Brexit opportunities minister Jacob Rees-Mogg downplayed the earthquake risks from fracking and suggested ‘every last drop’ of oil should be extracted from the North Sea, while Transport Secretary Grant Shapps said he did not favour a vast increase in onshore wind farms as he said they ‘can create something of an eyesore’.

The Government said it would be ‘consulting on developing partnerships with a limited number of supportive communities who wish to host new onshore wind infrastructure in return for guaranteed lower energy bills’.

It has already commissioned a review into the science around fracking, which could pave the way to lifting the moratorium on the controversial process, imposed over the tremors it caused.

A £30m competition to manufacture heat pumps is also to be launched, and there are ambitions to increase solar capacity with a consultation of the rules for solar projects.

Plus, the Government aims to double its goal of low carbon hydrogen production to 10GW by 2030, with at least half of that coming from green hydrogen.

Meanwhile, on oil and gas, a new licensing round for new North Sea oil and gas projects is planned for the autumn to cover the ‘nearer term’.

‘But the truly dangerous radicals are the countries that are increasing the production of fossil fuels. Investing in new fossil fuels infrastructure is moral and economic madness.’

The Just Stop Oil statement continued: ‘Fast forward not three days and the publication of the UK Government’s Energy Security Strategy. What do they propose? Granting licences to new North Sea oil fields, another look at fracking and purchasing oil and gas from Saudi Arabia? These are the morally bankrupt plans of a criminal cartel protecting oil over life on earth.

‘Reducing energy demand through insulating housing is among the most cost-effective measures to cut our carbon emissions and enjoys huge public support, yet it barely figures. The Government has fallen under the spell of shadowy lobbyists for the fossil fuel industry and is obsessed with huge infrastructure projects.

‘Boris (Johnson) needs to get a grip, he has referred to the oil funded war in Ukraine as genocide, what then do you call the planned deaths of millions due to the on-going support of the carbon economy?’

The Government has promised to take back control of energy prices through boosts to nuclear, wind, solar and hydrogen in its long-awaited Energy Security Strategy.

Ministers are promising ‘cleaner and more affordable energy’ to be made in this country, aiming to make 95 per cent of electricity low carbon by 2030.

Yesterday, Essex Police said they had arrested more than 70 people, including two who ‘voluntarily emerged from a tunnel’.

The force said the pair were arrested in Grays shortly after 5.30pm on Tuesday after they came out of a tunnel ‘where they had remained in situ for several days’.

They were arrested on suspicion of criminal damage and causing danger to other road users. Police said regular welfare checks had been carried out on them for their own safety and that of others.

They said supporters of the group who had dug a secret network of tunnels at the Navigator oil terminal and Grays oil terminals had gone underground as part of the action.

Police said more than 70 arrests were made yesterday following the arrival of more protesters at several locations in Thurrock in the early hours. They were arrested on suspicion of a ‘variety of offences’, the force said.

On Tuesday, a group of seven people were arrested shortly after 4.45pm following a short protest, police said. They were held on suspicion of committing a public nuisance and obstructing a highway.

The force said a total of 250 arrests have been made to date in connection with the protests. Essex Police said ‘a small number of people’ remain at one site, with ‘all other sites originally affected now clear’.

Essex Police Assistant Chief Constable Rachel Nolan said: ‘Despite having a period on Tuesday when all sites were cleared, the protesters have returned in the early hours today, causing disruption to the business community.

‘We continue to engage with a small number of people who continue to cause disruption and who remain on site.

‘We want to bring this situation to a safe conclusion for everyone concerned, allowing the Thurrock communities to resume their business activities.

‘We want to resume normality as quickly as we can.’

James Palmer, head of prevention and protection at Essex County Fire and Rescue Service, said crews have been ‘on-hand to maintain a safe environment and assist in the safe removal of protesters’ at the site still occupied by protesters.

On Monday, Extinction Rebellion said around 30 protesters returned to the Esso oil facility, near Heathrow Airport in West London, at 4am, erecting a bamboo structure in front of its entrance.

A spokesman or the Metropolitan Police said four people had been arrested, bringing the total number of arrests following protests in London and Staines to 18.

West Midlands Police said 13 people had been arrested following a protest at a terminal in Tyburn, Birmingham last Sunday. 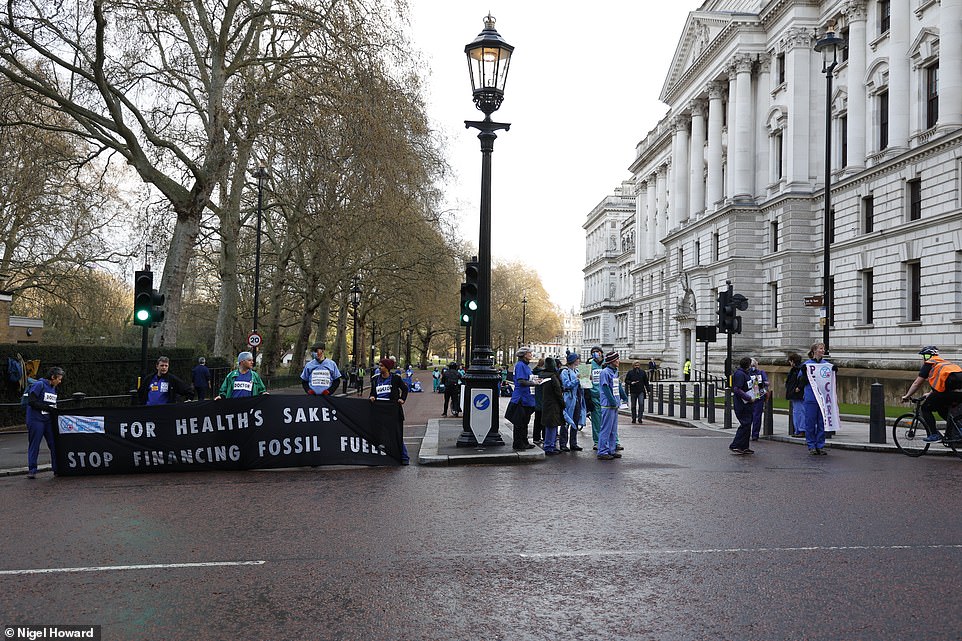 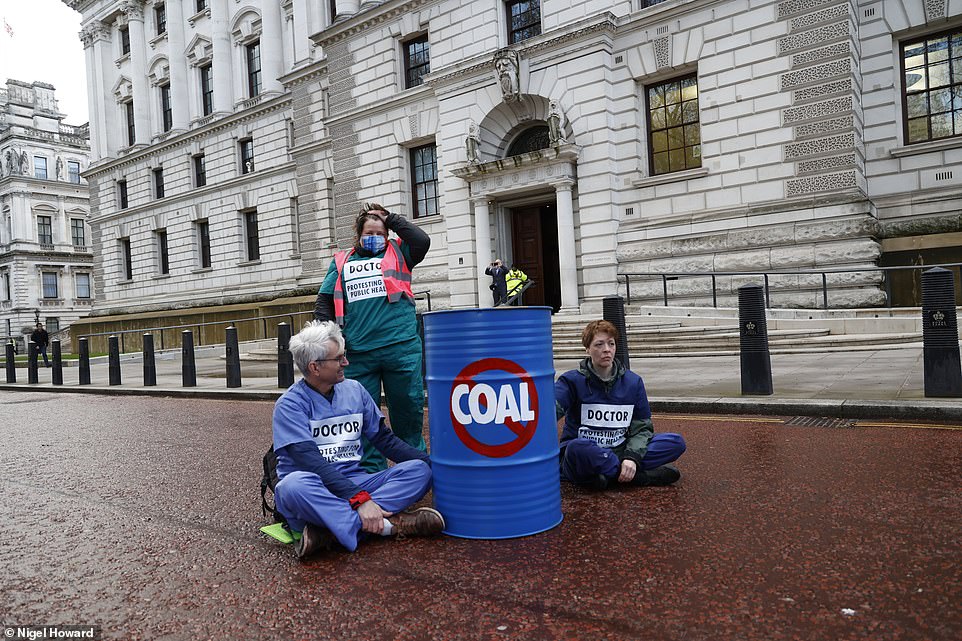 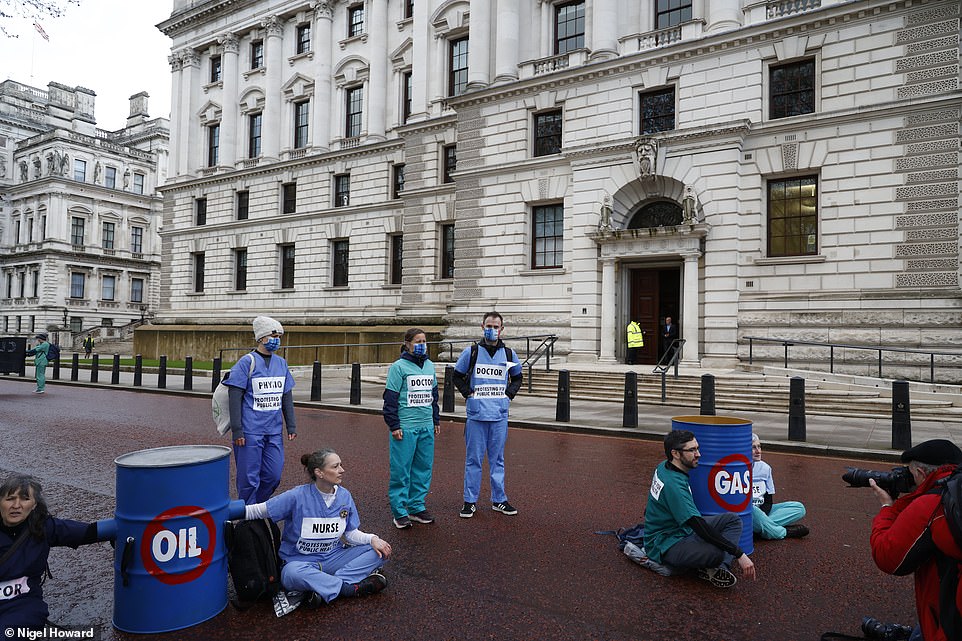 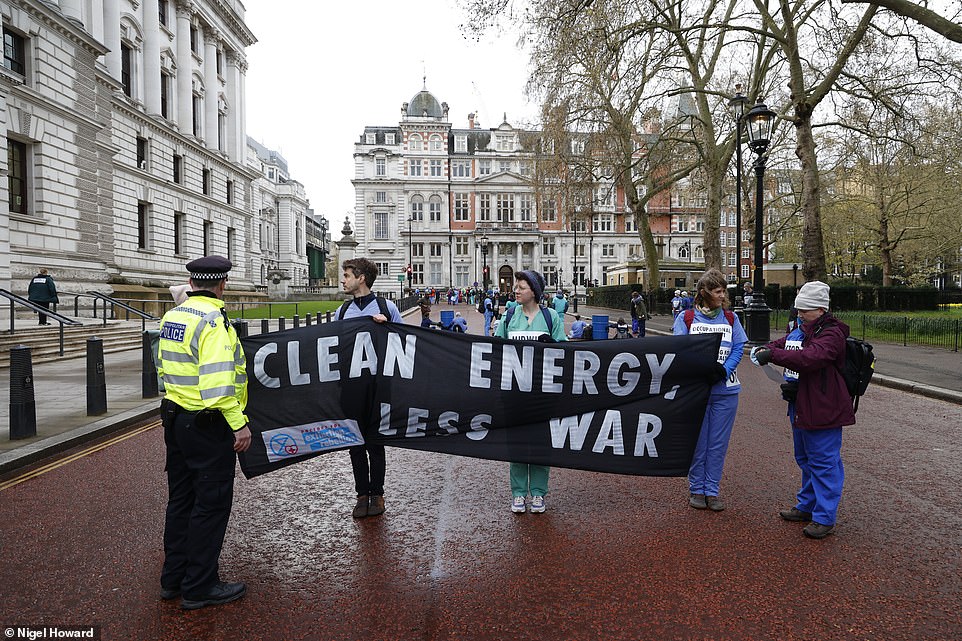 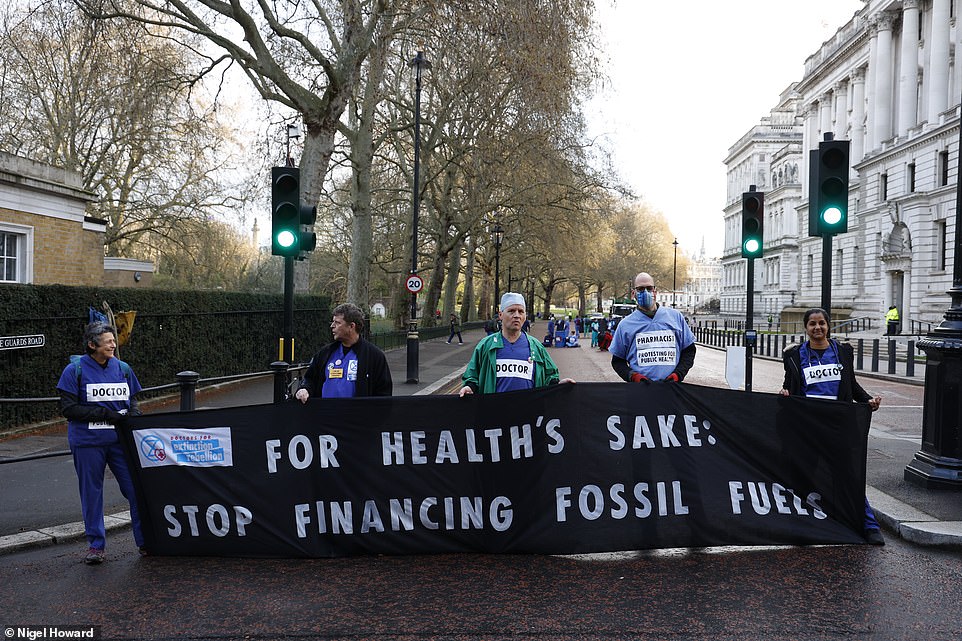 The Doctors for XR group wear labels on their blue and green scrubs today, saying: ‘Doctor – protesting for public health’ 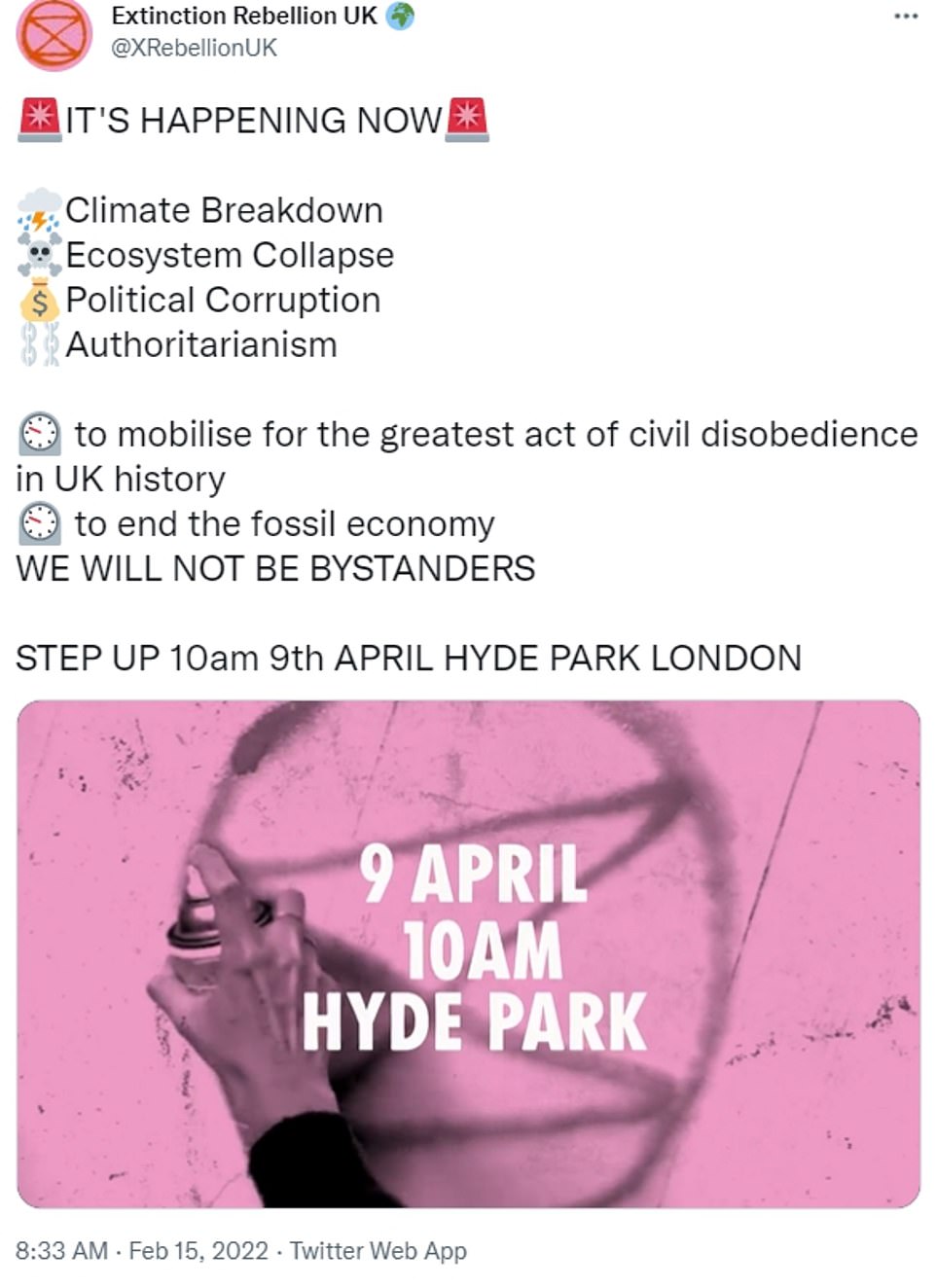 Hampshire Police said its figure stood at four arrests after demonstrations took place last Friday at Hythe Terminal in New Road in Hythe and at BP in Hamble Lane and Copse Lane.

A Government spokesman said earlier this week: ‘Any criminal activity will not be tolerated, and swift action is being taken by the police, preventing significant disruption to the public and industry.

‘While we are working to drive down our use of expensive fossil fuels, there will continue to be ongoing demand for oil and gas over the coming decades while we transition to cheaper low-carbon energy.

‘As the Business Secretary has said, turning off our domestic source of gas overnight would put energy security, British jobs and industries at risk, leaving us more dependent on foreign imports.