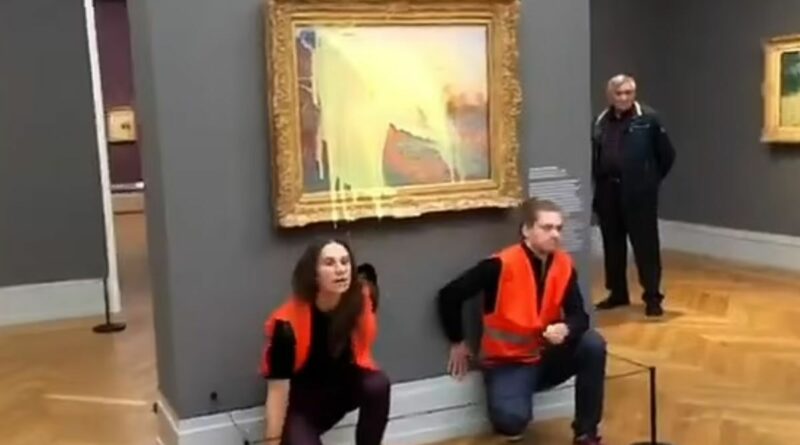 Two activists from the Letze Generation (last generation) climate group covered the famous Le Meules painting by Claude Monet in mashed potato on Sunday before gluing themselves to the floor. The protest took place in Germany’s Potsdam’s Barberini museum just over a week after two Just Stop Oil protesters threw soup on a Van Gough painting in the National Gallery, in London.

The two eco campaigners entered the museum, which is located in the historic centre of Potsdam, on Sunday wearing high-vis jackets before defacing the $110million painting.

Last Generation is a climate activist orgnanisation. Their website reads: “We are no longer willing to accept this crime against humanity without resistance.

“We will not wait while one state after another collapses. In the end, we are all in danger. We are the will to survive of this society”.

“In a video posted of the pair throwing mashed potato on the painting, the group wrote: “We make this Monet the stage and the public the audience.

It has not yet been confirmed whether the Monet painting was damaged or whether it is protected by glass.

The incident comes following a string of similar demonstrations by climate protesters that have been seen across Europe.

Members of the group blocked the zebra crossing, made famous by The Beatles, at 1pm on Sunday.

Last week, supporters of the eco movement also blocked part of the busy Dartford Crossing for one and a half days after climbing a bridge.

In a separate incident, on October 14, two activists from the group glued themselves to the floor of the National Gallery in London, after throwing tomato soup on a Van Gogh painting.

The pair were arrested for criminal damage and aggravated trespass, the Metropolitan Police said.

Anna Holland, 20, from Newcastle, and Phoebe Plummer, 21, from Lambeth, south-west, both pleaded not guilty to criminal damage to the frame of Van Gogh’s painting in a hearing at Westminster Magistrates’ Court in mid October.

Their trial is set for December 13 at the City of London Magistrates’ Court.

Hours after their arrest, other activists from the group launched an attack on the police, spraying orange paint over the New Scotland Yard headquarters in Westminster, London – resulting in 24 arrests by police.

The 23 consecutive days of disruption by the protest groups come after figures show gas and oil companies’ profits are soaring amid the war in Ukraine and high energy prices.