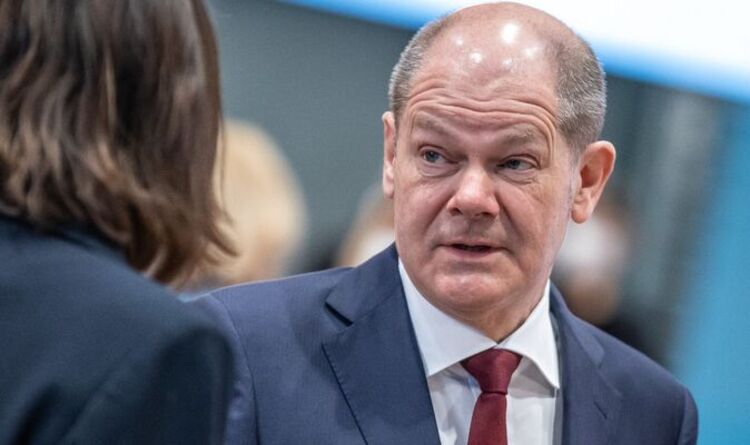 The federal cabinet approved German Finance Minister Christian Lindner’s budget plans on Wednesday. He signalled that there will be a supplementary budget to help the country cope with the consequences of the conflict in Ukraine. This could pay for relief for citizens from high energy prices.

Germany announced in February it would increase its spending on defence to more than two percent of its economic output in response to Russia’s invasion of Ukraine.

Mr Lindner also signalled potential support for companies in danger of collapse due to sanctions imposed on Russia.

The country’s economy ministry warned in its monthly report that soaring energy prices due to Russia’s war in Ukraine would dampen private consumption.

It said that the impact of Russia’s invasion on economic output depended on the duration and intensity of the conflict.

The forecasts do not include the impact of the Ukraine war.

Mr Lindner also announced he wants to take out £6.3bn (€7.5bn) in new loans to comply with Germany’s debt brake, a rule to limit government borrowing.

Soaring inflation remains a major concern for Germany’s economy with consumers and companies warned they would probably have to grapple with higher energy bills. Germany remains dependent on Russian gas and oil.

Chancellor Olaf Scholz’s coalition government has taken some measures to cushion the economic impact of the war.

A surcharge on electricity bills to fund the roll out of renewable energy is to be dropped for now. Companies doing business in Russia can also apply for grants.

Mr Lindner, announcing further measures on Twitter, said: “We have just launched the #Tax Relief Act in the cabinet.

“This can bring relief amounting to 4.5 billion euros: Increase of the lump sum, of the basic tax allowance and of the commuter allowance. For me, it is clear that further measures must follow.”

He has been urged by colleagues to cut fuel duty, increase mileage rates from 45p to 60p and give a 15 percent cut to “vital fuel users”, such as haulage firms.

Mr Sunak stopped short of offering any commitments ahead of the Spring Statement on March 23, but offered to bear the suggestions in mind.

Opening Treasury questions on Tuesday, Mr Sunak said the Government recognises inflation is rising and is closely monitoring the situation with the Bank of England.

Tory MP Jake Berry said: “With the cost of fuel now being an eye-watering £2 a litre in some areas, it’s led to a huge VAT windfall [for] the Treasury.

“When the Chancellor thinks about his Spring Statement coming up, will he not only look at cutting fuel duty, but also look at mileage recovery rates?

Mr Sunak replied: “I’m grateful to [him] for his suggestions, of course I’ll bear them in mind.

“He’s right about the rising cost of fuel at the pumps, although I am pleased to see that over the last few days the price of Brent has fallen by about 25 percent, just illustrating the volatility of the situation [we are] currently experiencing.”

Labour pressed for a windfall tax on the profits of oil and gas firms to help working families. Mr Sunak defended the support being offered by the Government.

This includes giving 28 million households in Britain a £200 rebate on their energy bills from October. This is due to be recouped by hiking bills by £40 per year over five years from 2023.

Mr Sunak has also promised a £150 council tax rebate for homes in bands A to D.

With additional reporting by Monika Pallenberg.