Francesca Bonafede says her former partner was able to access her personal data in the move, and get hold of her bank details and new address. 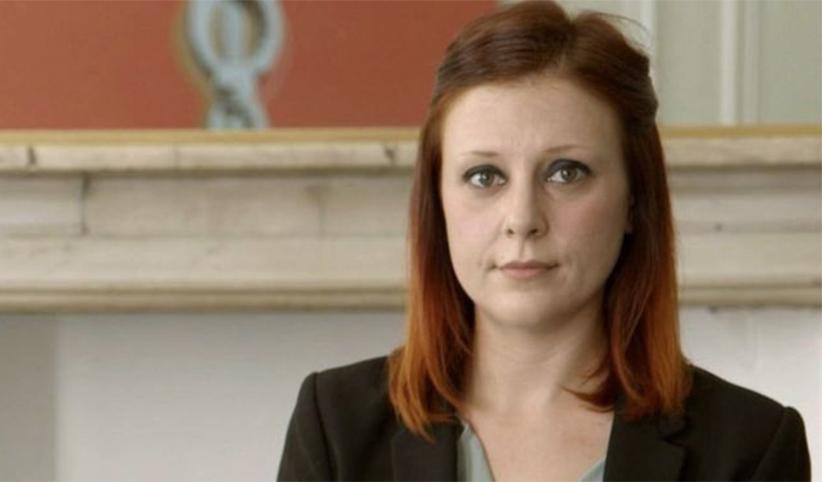 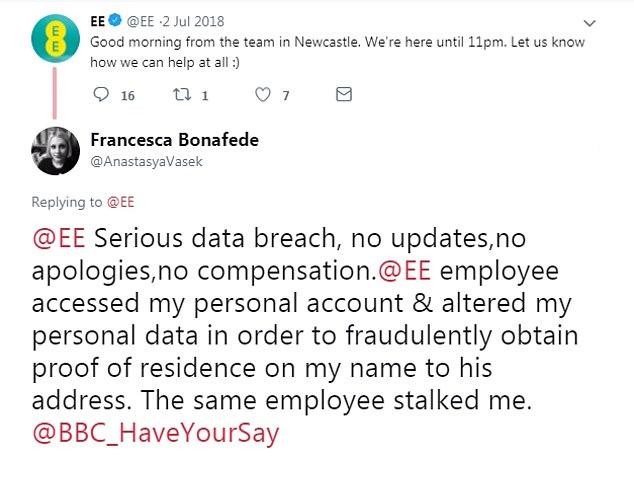 She claims the network didn't help until she posted what had happened on Twitter – EE has since apologised to her.

The doctoral researcher at the University of Westminster wrote she was a victim of "serious data breach", after her phone suddenly stopped working in February 2018.

After five days with no signal she was told someone had gone into an EE shop, asked for a new Sim card and moved the account to a new handset.

She recognised the new address on the system as her ex's, who works in one of the network giant's stores.

The customer wrote on Twitter: "In one instance I was also told I would receive a phone call to update me on the situation but I was never contacted.

"After days of having my phone out of action spent hours talking to different customer service agents without results, I finally talk to an agent which thankfully reads out the notes on my account.

"That’s how I discovered what had happened— according to the notes I visited a store, requested a new sim card and asked for my personal data to be altered and paper bills to be sent to the altered address.

"I obviously never visited a shop or requested any of the above."

It was really distressing and I had to go to the police and tell them what was happening.

She told the Victoria Derbyshire show: "The agent just didn't seem concerned at all.

"I kept asking to speak to a manager who could give me more concrete information, and I was always told no-one was available."

Any calls and texts made to her number during that time could have been seen by him.

She added he contacted her "endless times" to get her to withdraw the complaint, and turned up unannounced with his pals at her new home.

Ms Bonafide said: "It was really distressing and I had to go to the police and tell them what was happening.

"They asked me repeatedly what EE was doing about all this and I just had to say, 'actually, I don't have a clue because they don't keep me updated'.

"The only way he could have known about my new address was through the data breach, because we broke up quite a long time before that."

An EE spokesperson said: "Protecting our customers’ data and privacy is our top priority, and we have strict policies and procedures in place to keep personal details safe.

"This was the action of one employee whose specific intent was to obtain Ms Bonafede’s details illegally.

"As soon as she contacted us with concerns we immediately carried out an investigation into what happened and our policies were not followed in this instance.

"This matter has been dealt with internally and the employee involved no longer works for us. While we worked quickly to protect Ms Bonafede, we have apologised to her for the distress caused, sharing with her the steps we took to investigate to reassure her that we acted immediately and took it extremely seriously." 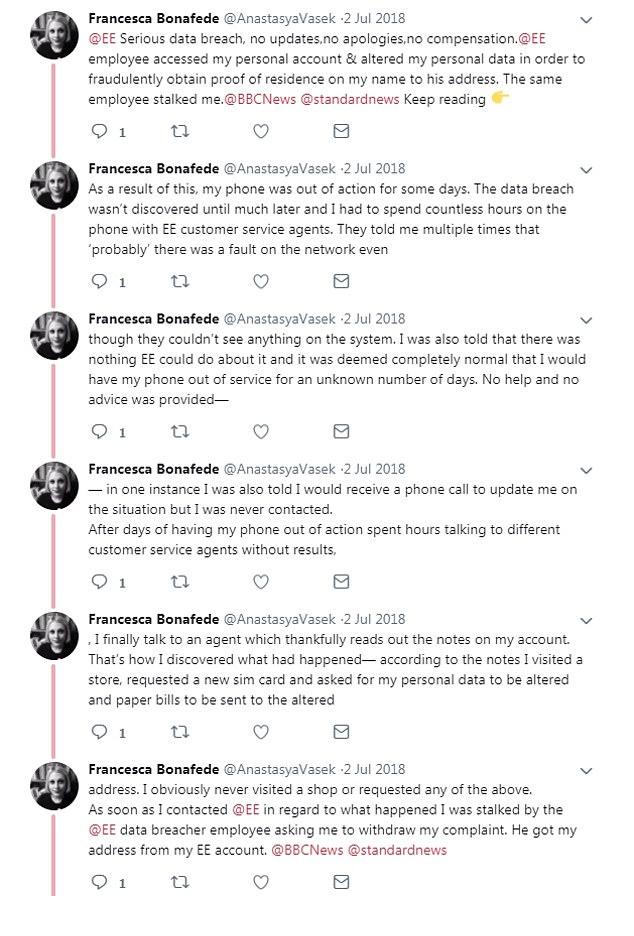