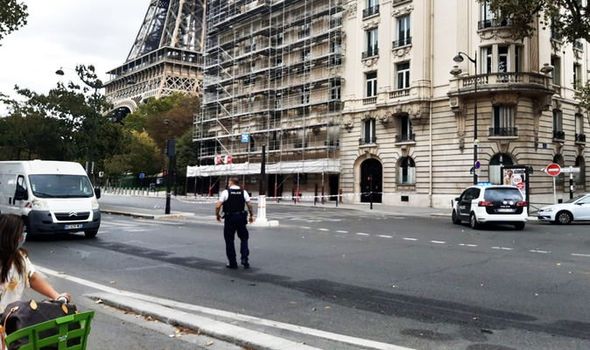 In pictures, French police can be seen setting up a cordon in the immediate area.

Armed police were also seen in the area to deal with the incident.

A police operation is now in progress.

According to French journalist, Amaury Bucco, a man threatened to detonate an explosive device shortly after 11am this morning.

He added: “Perimeter of the Eiffel Tower cordoned off, police operation in progress: a man shouted Allahua Akbar and threatened to detonate a device.”

The French police have not released a statement on the incident today.

The famous landmark has also been evacuated, while the surrounding roads have been closed off.

Local TV station, BFMTV said they had received an anonymous phone call alleging a bomb had been planted in the area.

He said: “The surrounding area of the Eiffel Tower has been cordoned off by the police.

“Traffic is diverted to Quai Branly.”