Home » World News » Eight US states have primaries on Tuesday. Here’s what to watch for.

New York: Eight states are holding primaries on Tuesday (Wednesday Australia-time): Alabama, California, Iowa, Mississippi, Montana, New Jersey, New Mexico and South Dakota. It will be the busiest primary day of the year so far, as voters choose the candidates who will face off November 6.

Most of the attention this week has focused on California. Skip to the end if you want to read about that — but first, here's what you need to know about the other seven states in play. 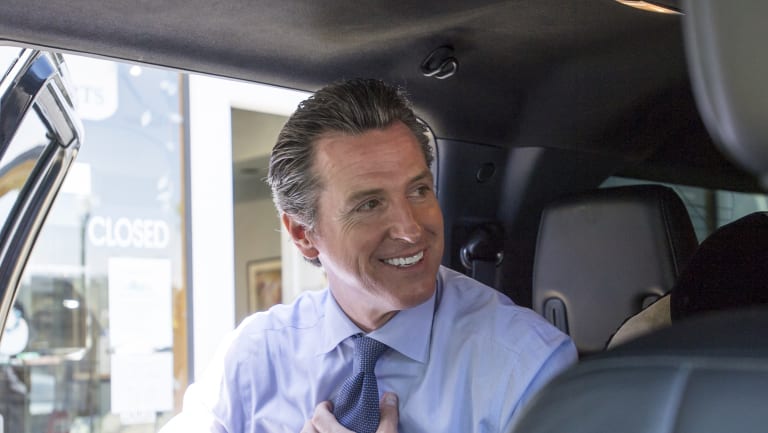 Gavin Newsom, Democratic candidate for governor of California, adjusts his tie while getting into a vehicle after voting at a polling location in Larkspur, California.

Democrats think their path to retaking the House runs through the suburbs and New Jersey is full of them. Five of its 12 seats are held by Republicans and remarkably, Democrats have a shot at all five — even a couple districts that haven't elected a Democrat since Jimmy Carter was president.

One of the most interesting primaries is in South Jersey, in the 2nd District, where Republican Representative Frank LoBiondo is retiring. The effort to flip his seat has become a microcosm of a national battle: Jeff Van Drew, a conservative Democrat, says only someone like him can win the general election in a right-leaning district, while Tanzie Youngblood, his progressive challenger, is doubling down on the party's liberal base.

Another race to watch is the Republican Senate primary. If Bob Hugin, the former chief executive of a biotech company, wins as expected, he could set up a competitive race against Senator Robert Menendez. A Democrat who would ordinarily be a shoo-in for re-election, Menendez was admonished in April by the Senate Ethics Committee for accepting gifts. 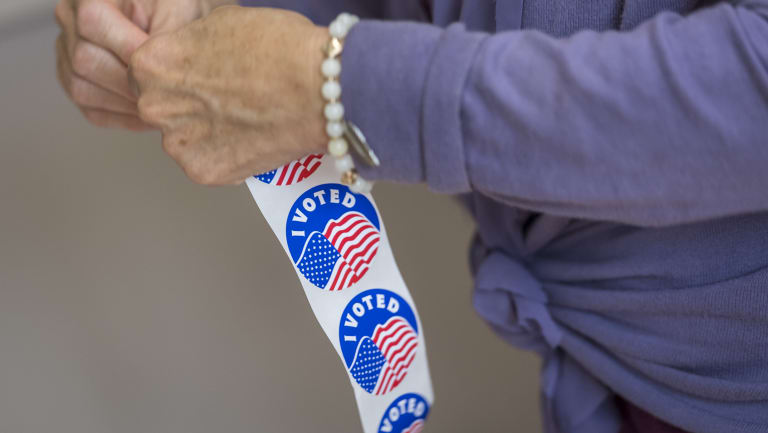 A voter peals off an “I Voted” sticker at a polling location in Larkspur, California.

In a deep-red state like Alabama, general elections tend to be afterthoughts: Except in extraordinary circumstances, Republican primaries are where the winners are chosen. That appears to be the case this year as well, as Republican Goveronor Kay Ivey seeks a full term after replacing Robert Bentley in 2017.

Polls show Ivey comfortably ahead, but it's not clear whether she can break the 50 per cent threshold needed to avoid a runoff in July. Her opponents — Mayor Tommy Battle of Huntsville, state Senator Bill Hightower and Scott Dawson, an evangelical preacher — have seized on her refusal to participate in debates, accusing her of taking voters' support for granted.

Democrats would love to retake the governorship from Republican Kim Reynolds, but they hit a snag in May when state Senator Nate Boulton dropped out of the race in response to sexual misconduct allegations. Fred Hubbell is the front-runner in the primary now, but early votes cast for Boulton could keep Hubbell below the 35 per cent threshold he needs to avoid a nominating convention — a time- and resource-consuming step the party doesn't want.

And keep an eye on the 1st and 3rd districts where Republican incumbents may be vulnerable. Four Democrats, led by state Represenative Abby Finkenauer, are running in the 1st District to challenge Rep. Rod Blum, a Trump-supporting Tea Party Republican and member of the conservative House Freedom Caucus. And in the 3rd District, three Democrats — including Pete D'Alessandro, who led Bernie Sanders' 2016 caucus campaign in Iowa — want to face Rep. David Young. Here, too, there is a risk that no one will meet the threshold to avoid a nominating convention.

The Republican Senate primary here is a rare race that was expected to be brutally competitive but ended up not being competitive at all.

Senator Roger Wicker expected a tough primary challenge from Chris McDaniel, a conservative firebrand who almost unseated Senator Thad Cochran in 2014. But when Cochran stepped down this spring, McDaniel decided to run for his seat instead. That election will be held in November and Wicker's field is clear of any serious competitors. Move along — there's nothing to see here. Really.

Watch the Republican primary here closely. It could determine who controls the Senate.

With two terms under his belt, Senator Jon Tester has proved himself capable of winning in a red state. Still, Montana voted for President Trump by 20 points, which makes Tester one of the most vulnerable Democrats in the country. Matt Rosendale, the state auditor, seems to be the front-runner over Troy Downing, an Air Force veteran and entrepreneur; Russ Fagg, a former state district judge; and state Senator Al Olszewski.

Democrats also want Montana's House seat, held by Greg Gianforte, a Republican known for assaulting a reporter last year. He has raised more money than all his Democratic challengers combined.

The 2nd District, which covers most of the southern half of the state, is the only one of New Mexico's four that is represented by a Republican and Democrats want to complete their set with Xochitl Torres Small, a lawyer supported by Emily's List and the state party, or Coast Guard veteran Madeline Hildebrandt. Represenative Steve Pearce, a House Freedom Caucus member, is giving up the seat to run for governor and four Republicans — led by state Represenative Yvette Herrell, whom the New Mexico Republican Party endorsed over its former chairman Monty Newman — are vying for that nomination.

In the Senate, Martin Heinrich, a first-term Democrat, is up for re-election. But he's a safe bet in November, and both he and his Republican challenger, Mick Rich, are running unopposed in their primaries.

Governor Dennis Daugaard can't run for re-election because of term limits and the Republican primary will almost certainly determine his replacement. The race couldn't be much closer: A Mason-Dixon poll in May showed a single percentage point separating the state attorney general, Marty Jackley, and Rep. Kristi Noem, who would be the first woman to govern South Dakota.

Voters will also, in all likelihood, choose Noem's replacement Tuesday. The Republican candidates are Shantel Krebs, the secretary of state; Dusty Johnson, a former public utilities commissioner and former chief of staff to Daugaard; and state Sen. Neal Tapio, who drew attention last week for suggesting that the state dismantle the Native American reservation system.

Here are the main takeaways:

— Former mayors of San Francisco and Los Angeles are battling for the governorship.

— Democrats hope to flip seven House seats. Among the many candidates is a volcanologist.

— National Democrats' biggest fear is that California's primary system, in which the top two finishers advance regardless of party, will shut them out of the general election in key districts.