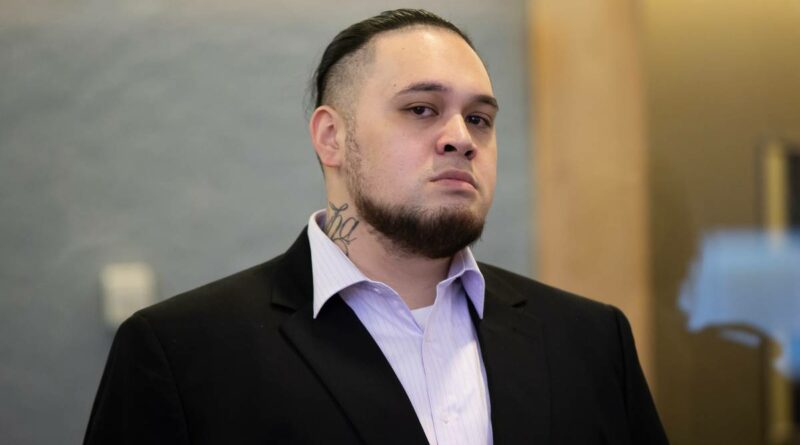 There was eerie silence among those packed into the Auckland High Court as a crash, screams and 14 thunderous blasts from a military-style semi-automatic rifle rang out — a CCTV recording of the moment Constable Matthew Hunt was shot dead.

Crown prosecutors played the haunting audio yesterday for the crowded courtroom, which included uniformed officers and Hunt’s mother as well as jurors, during opening statements for the trial of Eli Bob Sauni Epiha.

The defendant, 25, pleaded guilty last week to murdering Hunt — although he contends the shooting was reckless instead of intentional — and to injuring a bystander who was hit by Epiha’s car as he fled police on the morning ofJune 19, 2020.

The CCTV footage was played back-to-back with cellphone footage of Epiha, two rifles slung over his shoulders, calmly getting into the passenger seat of another car moments after the shooting as Hunt lay in the middle of the West Auckland residential street, motionless.

Epiha’s co-defendant, Natalie Jane Bracken, was recorded getting into the driver’s seat. She is charged with being an accessory after the fact to murder, helping him initially escape the police officers who would soon swarm the street.

That morning started inconspicuously as Hunt and Goldfinch parked a marked car on the side of the road, on traffic duty. When Epiha’s car aroused their suspicion, they tried to follow but he sped off — crashing seconds later after he swerved to avoid hitting a rubbish truck, prosecutors said.

When the officers arrived at the crash scene, Goldfinch got out first. Unarmed, he could only think to yell out a few words as he realised the stranger was holding a rifle, Crown prosecutor Alysha McClintock said during her opening statement.

But 10 shots followed, bullets hitting the officer four times as he ran away. Epiha then turned fire on Constable Hunt, killing him with four shots from behind, McClintock said.

McClintock acknowledged the footage played in the courtroom was confronting and said she would play it sparingly through the trial, which is scheduled to last three weeks. But it’s an important piece of the puzzle, she said.

“It shows a level of persistence and determination that demonstrates what was in Mr Epiha’s mind,” McClintock told jurors, explaining that only 10 seconds elapsed between when Goldfinch was shot at 10 times and Hunt was fired on four times.

“It is hard to imagine a clearer demonstration of Mr Epiha’s intention that day. It really does take you as close to the inside of his mind as you can get.”

During a brief opening statement for Epiha, lawyer Marcus Edgar expressed condolences to Hunt’s family on behalf of his client and the defence team. His client concedes he was the shooter but he never intended to kill anyone that day, he suggested.

“That opportunity to execute that man would have happened at the very beginning,” he said, describing the scene as chaotic and confusing. “So it’s not a black and white case.”

Bracken’s lawyers declined to give an opening statement. Prosecutors, however, predicted her defence will be that she had no choice because she was afraid of Epiha. But she could have run away and called police, or at the very least not tried to evade police for a day if that was her intention, prosecutors contended.

They plan to play her interview with police later in the trial.

Testifying first in the trial were three officers, including Constable Ilya Kokine. He paused, his voice quavering, as he recounted for jurors being one of the first officers on the scene.

The three-year police veteran, who had just joined the road policing unit that morning, recalled waving to Hunt and Goldfinch, even though he didn’t know them personally, as the two patrol vehicles passed. He also recalled seeing a suspicious vehicle — speeding, dirty and with odd stickers — pass by shortly before a muffled shout came over the radio.

“We essentially dropped everything,” Kokine recalled, explaining that he unlocked a Bushmaster rifle from their car and his partner grabbed a pistol from their car’s gun safe. A short time later, he said, a rubbish truck stopped and told them the shooting had occurred just around the corner.

“Do you guys know that your boys have been shot down the road there?” he recalled the driver saying before the officers sped off to the scene.

They immediately noticed Hunt lying in the road when they arrived, motionless and “in the starfish position”.

“Mate, we’re here! Come to us!” he had yelled at Hunt. But he got no response.

At that point, he saw people gathering around another man who was also on the ground. Unsure if it was the shooter, he approached with his gun drawn.

“Armed police, do not move!” he shouted. “Show me your hands.”

So he ran back to his patrol car and turned his attention back to the motionless officer.

“I’m moving forward! Cover me!” he shouted at the acting sergeant who was training him on traffic duty that day.

No, the sergeant said. They needed to wait for backup.

“Just f***ing cover my back,” Kokine recalled replying as he moved into a fast tactical walk. “I’m moving forward.”

As he recalled the moment he saw Hunt up close, he had to pause to collect himself.

“He wasn’t making movement at that point,” Kokine recalled. “I guess I was hoping that things weren’t as bad as they looked.

He called out to Hunt.

“Are you alright, mate? Are you good?”

But Hunt’s mouth and eyes were open, and his stomach wasn’t rising at all. He attempted to give CPR until other officers arrived and took over.

“My hands were trembling,” he said.

The trial before Justice Geoffrey Venning is set to continue today.

The judge briefly mentioned after the jury was seated that there had been a shooting over the weekend in Hamilton in which another officer was shot.

“That obviously has nothing to do with this case,” he said. “You must put it aside.”