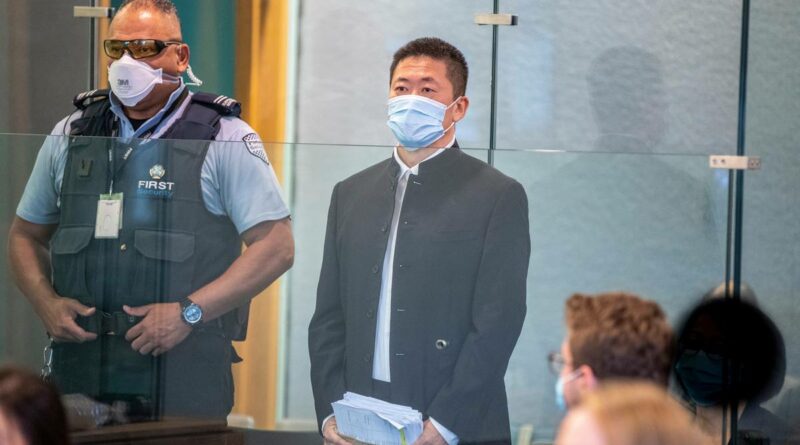 The man accused of murdering Auckland businesswoman Elizabeth Zhong – ambushing her in her bedroom in the middle of the night with a knife attack so brutal she was nearly decapitated before stuffing her body into a suitcase – was an embittered former business partner who blamed her for ruining his life, jurors were told today.

Fang Sun, 48, had initially been so close with Zhong after meeting her in 2013 that he had lived with her family after moving to New Zealand from China.

But in the years that followed, Crown prosecutor Gareth Kayes said today during opening statements, their businesses went into receivership and Sun accused Zhong of mishandling money. Their partnership devolved into a multi-million dollar lawsuit in the High Court at Auckland, the same place where Sun stood today, answering “not guilty” when asked in front of the jury how he wished to plead.

“It would appear Fang Sun blamed Elizabeth Zhong for losing him or his family over $25 million,” Kayes said, explaining that in addition to the lawsuit Sun repeatedly threatened Zhong and paid a private investigator up to $300 an hour to follow her for months.

It was clear, Kayes said, that Sun believed Zhong “had become his nemesis”.

Zhong’s body was discovered by police in the boot of her black, blood-smeared Land Rover on a Saturday evening in November 2020. The vehicle had been left parked on a residential street in Sunnyhills, an east Auckland neighbourhood where both she and Sun lived in nearby homes.

She had last been seen alive the previous afternoon and had been reported missing that Saturday morning after a close friend stopped by her home and noticed blood in her bedroom.

The 55-year-old, whose formal name is Ying Zhong, had moved to New Zealand from China in 1997. The former Beijing stock market worker set up and ran a business school upon arriving in New Zealand and owned multiple businesses, including a film company, two wineries and Sunbow Ltd, which Sun and his family had invested in heavily.

But she began losing the companies and properties as, one-by-one, they were sold off to repay debts she owed the bank.

As their partnership soured, Sun moved out of the house he shared with Zhong in 2019 and Zhong changed the locks, prosecutors said.

But they believe he returned in the early morning hours of November 28, 2020, and confronted her in her bedroom, making good on previous threats.

“He used a knife to stab her over 20 times, targeting her head, her neck and her back,” Kayes said.

Sun is then alleged to have used a suitcase to take her body to the garage, placing her in the boot of her own Land Rover before driving the vehicle to his own home for about 15 minutes, prosecutors said, citing CCTV footage and data from a tracking device the private investigator had previously hidden underneath Zhong’s vehicle.

The vehicle was then abandoned a short distance away, with Zhong’s body wrapped in a blanket and covered by the suitcase and more blankets so that it couldn’t be seen from outside the vehicle.

“Before he could dispose of the body more permanently, Ms Zhong’s friends … found her car,” Kayes explained.

While the knife used to kill Zhong was never found, a post-mortem DNA analysis of her fingernails suggests a strong possibility that they contained the defendant’s DNA, prosecutors said, adding that the attack seemed far from random.

“Very little was taken … but the killer did take the CCTV equipment,” Kayes said, explaining that the defendant had been living in the house when the security system was installed in a cabinet underneath the stairwell.

Defence lawyer Sam Wimsett asked jurors during his opening statement to keep an open mind, predicting that they will hear about “other suspicious characters in this case” and could have a completely different view of events at the end of the trial than what was portrayed by prosecutors.

He suggested that his client might have been framed by someone who intentionally parked the vehicle near his client’s house to make it look suspicious.

“Quite simply and quite strongly, it was not him,” he said. “He is not a murderer, and he is not as stupid as to have done some of the things that were done here.”

At the conclusion of opening statements, Justice Neil Campbell dismissed jurors until Friday, when the first witnesses are expected to be called. That is partly so the judge’s opening remarks and the lawyers’ opening statements can be interpreted into Mandarin for the defendant, he explained.

The trial is expected to last six weeks.