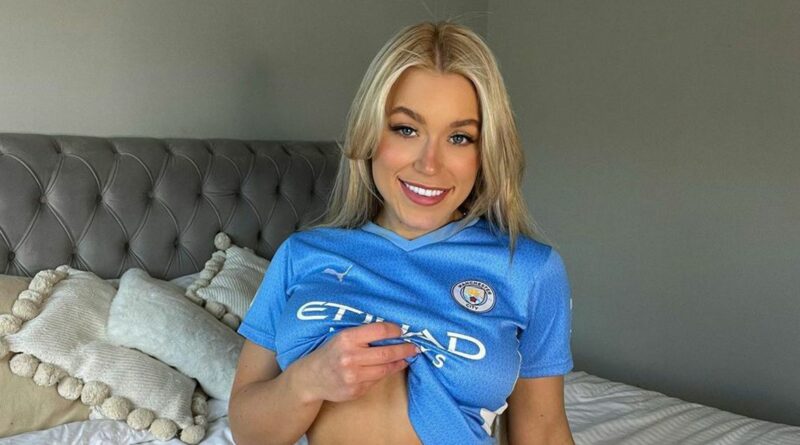 Elle Brooke has called out her next opponent, fellow OnlyFans star Tana Mongeau, without saying a word, in a TikTok video.

The five second clip sees Brooke wearing her trade mark Manchester City kit with the words "Someone needs to humble Tana Mongeau" at the top of the screen.

She then steps forward miming swiping down, then to the left, before approaching the camera and delivering a jab and punch.

Brooke has tagged Mongeau's TikTok handle to the clip with the message "@Tana Mongeau are you a lover or a fighter?"

The clip, which has been viewed 1.6million times and picked up nearly 80k likes along the way, hasn't had a response from Mongeau.

Mongeau's TikTok following dwarfs that of Brooke with 7.2million followers, compared to Brooke's following of 1.8million, so it may be she hasn't got through all her admin to respond to the challenge.

Earlier this month Brooke scored a points victory in her boxing match against Love Island star AJ Bunker to settle their rivalry, but just a few weeks later she appears raring to climb back into the ring.

Reality TV star Bunker had stepped in at short notice after Brooke's previous opponent dropped out to settle their bitter rivalry over four rounds in the boxing ring.

Brooke was set to make her boxing debut against Astrid Wett but her rival withdrew at short notice over safety fears.

Bunker's bid to end her newfound feud with the high-profile TikToker ended in defeat, however, with all of the judges scoring the contest at 40-36 in favour of Brooke.

The OnlyFans and TikTok star was happy to have scored decision victory on her debut, and delivered an X-rated speech after being left frustrated to not find her promised stoppage.

"Yes I knew i could do it get me out of this s***hole," she said after the final bell.

"I was thinking f*** me I didn't get this KO, but here's to my opponent because you are still a dead thing.

"Look I f****** love you all I know you might call me Brock Lesnar but that's because I am.