Home » World News » End of an era for Stonnington

With revelations in CBD, and elsewhere in The Age on Saturday, about a portrait of deputy mayor John Chandler given to the council by a property developer, Monday night's meeting of Stonnington Council will be a doozy. 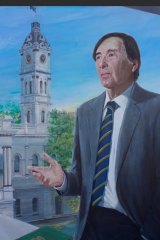 Detail from the portrait of Cr John Chandler by artist Anna Minardo. Credit:

Three councillors, Marcia Griffin, Sally Davis and Judy Hindle, have put up a motion that the council should hand the portrait back to local property developer Bill McNee.

The atmosphere is febrile, given nominations to stand as a candidate in looming elections close at noon on Tuesday.

As things stand, there are two glaring omissions from the Victorian Electoral Commission register of nominations: mayor Steve Stefanopoulos and Chandler himself.

Stefanopoulos told CBD that he had submitted his nomination on Friday.

Chandler, who was first elected to the old Prahran Council in 1982, declined to comment, but CBD can reveal that he will not stand for election again, bringing an end to nearly four decades of service to local government.

Also saying goodbye to local councildom is our old friend Intaj Khan, the "West is best" Wyndham councillor who proposed building a $9.5 million 16-bedroom mansion (including a helipad and 30-seat movie theatre) in Tarneit in 2016, which locals immediately dubbed the "In-Taj Mahal". He has decided not to stand for re-election amid rumours he is eyeing off a state seat. Watch this space.

He Who Must Not Be Defamed

Julian Morrow, co-founder of satirical group the Chaser, has always been a stout defender of free speech. He even gave an Andrew Olle Lecture on the subject.

So it is a surprise to learn that Morrow attempted to sue fellow TV producer Nick Murray for defamation after Murray referred to him as "Lord Voldemort", the fictional villain from the Harry Potter series, in an email to the ABC.

No need to point out that Morrow is perfectly within his rights to do so if he feels his reputation has been injured and livelihood damaged.

The pair, who used to jointly produce the consumer program The Checkout, via their respective production companies Giant Dwarf and Cordell Jigsaw, are already in legal dispute after a nasty falling out, as CBD reported last week.

A lengthy defamation action refers to a series of emails Murray wrote to ABC executives, including Michael Carrington, director of entertainment and specialist.

The original version of the action sought aggravated damages over an email Murray sent last September to ABC executives. It claimed an "additional contempt" to "ensure further substantial damage to his reputation by referring to him as 'Lord Voldemort' ".

But Justice Patricia Henry, in the NSW Supreme Court, dismissed an application to join the defamation to the main dispute, saying it had to be filed separately.

New papers for a separate defamation action were served on Cordell Jigsaw last week, but the aggravated damages claim referring to the characterisation of Morrow as He Who Must Not Be Named had disappeared. Expelliarmus! 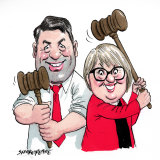 Now the administrators have decided that the branch's disputes tribunal will be "renewed" to ensure that it is "fit for purpose". So out go Anna Burke, the former member for Chisholm and a member of the Administrative Appeals Tribunal, John Speight, former AMWU state president, and David Cragg, former Victorian Trades Hall assistant secretary. They have been thanked for their "contribution and commitment in an often thankless task".

By "fit for purpose", the administrators mean send in the judges. The three new members are all legal heavies.

Kevin Bell is appointed to the new post of president of the tribunal. The professor of law at Monash University was previously a justice of the Supreme Court for 15 years and is director of the Castan Centre for Human Rights Law at Monash.

Barrister Kate Auty has been a magistrate in two states and is a professorial fellow at the University of Melbourne, while Ross Howie is a former judge of the Victorian County Court.

Macklin and Bracks also updated members on the forensic audit of membership undertaken by Deloitte. The basic message here was if you receive an email, letter or text in the next few days, be alert but not alarmed. "We make no prejudgment in doing so. We know bona fide members may be surprised to receive these communications from us."

It's not like Crown to let a pesky licensing snag get in the way of Crown Sydney plans for a scheduled opening in December.

Crown has hired prolific corporate affairs boss Tanya Baini to head the regulatory charge at Crown Sydney. Baini, is a close friend of Premier Gladys Berejiklian and accompanied her friend, the Premier that is, on a July 2017 trip to Hawaii.

Baini currently heads corporate affairs under Alison Watkins at Coca-Cola Amatil. Before that, she held plum jobs at BHP in Melbourne and at road giant Transurban. An insider told CBD Baini is expected to start in November. She will focus predominantly on maintaining Crown's relationship with the state's independent liquor and gaming regulator, a relationship which no doubt will need close tending long after Bergin's inquiry wraps up.

This week, Crown managing director Kenneth Barton, general counsel Mary Manos and director Michael Johnston will front the inquiry. It's likely the hearings, which start on Wednesday, will make for compelling listening, given Johnston's appearance.

In July, former chief executive Rowen Craigie told the inquiry Johnston had played an influential role in Crown's VIP and high-roller scheme, particularly in the lead up to the Chinese government's arrest of Crown staff in China in 2016.

"It was a natural fit for Mike's skill set," Craigie said of the director and the VIP program.