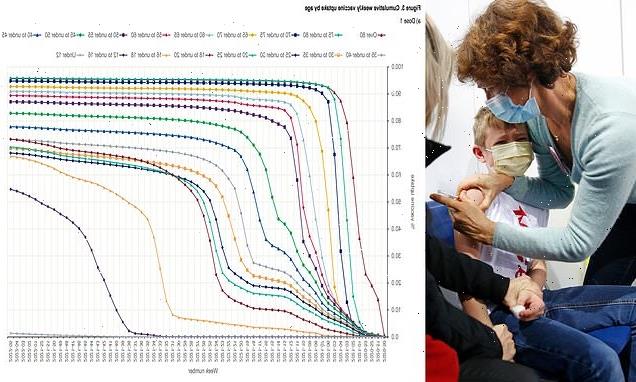 England will start offering Covid jabs to ALL over-5s: Vaccines will be rolled out on a ‘non-urgent’ basis because their Covid risk is so low and should not be prioritised over MMR or HPV shots

Healthy children aged five to 11 in England will be offered two Covid jabs on a ‘non-urgent’ basis, it was announced today.

No10’s vaccine advisers have said that the jabs will protect a ‘very small number of children from serious illness and hospitalisation’.

Officials stressed that the offer is not urgent because Covid poses such a tiny risk to healthy children. Its main purpose is to safeguard youngsters against future waves.

The Joint Committee on Vaccination and Immunisation (JCVI) has warned the jabs should not be prioritised over other childhood vaccinations in this age group.

It highlighted that MMR and HPV vaccine uptake has plummeted during the pandemic, believed to be due to the emphasis placed on the Covid jab rollout.

The move comes after Scotland and Wales both announced they were expanding their vaccine programmes after accepting the JCVI’s recommendations.

Roughly 5million more children are now eligible for the jabs and will be given them 12 weeks apart. The Government aims to offer a first dose to all eligible children by April.

But only half of children aged 12 to 15 have received a Covid vaccine in England and just a fifth have had two doses – raising questions about public demand for the move.

The JCVI believes around 85 per cent of primary school-aged children have already had Covid and have some immunity.

Unlike with previous expansions of the vaccine rollout, the JCVI’s update made no mention of the jabs’ impact on infection rates.

Two doses have been shown to offer as little as 10 per cent protection against Omicron, but immunity against moderate and severe disease is much higher. 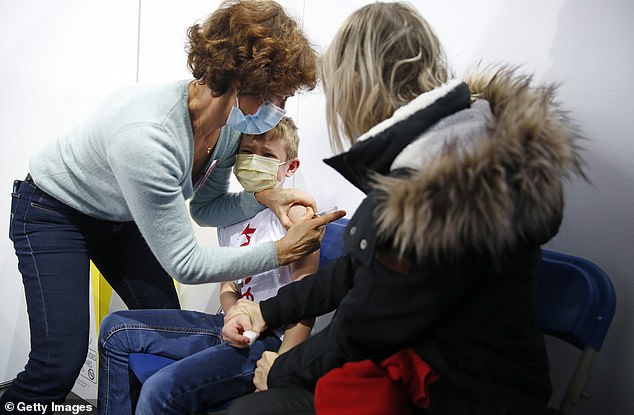 Healthy children aged five to 11 in England will be offered two Covid jabs on a ‘non-urgent’ basis, it was announced today (stock image) 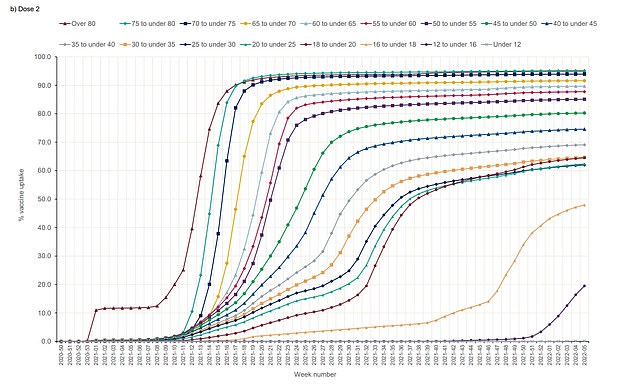 Only 20 per cent of 12 to 15-year-olds (shown in purple, bottom) have been double-vaccinated in England since the rollout was expanded to them in November. But they must wait 12 weeks between doses 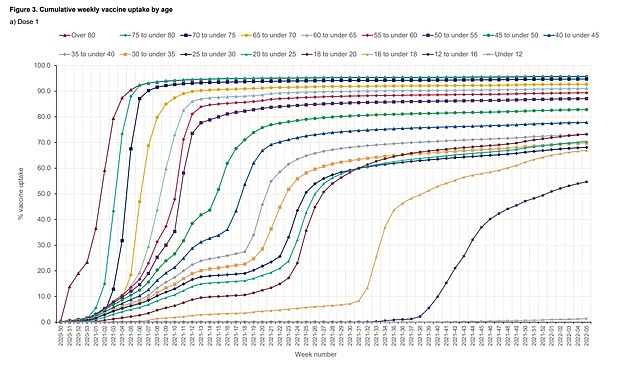 The JCVI explored whether the vaccines could prevent disruptions to children’s education by preventing mild disease but said there was not enough evidence.

It said the main purpose of the jabs is to act as a safeguard in case a new variant emerges that is more dangerous to children.

‘The main purpose of offering vaccination to 5-11 year olds is to increase their protection against severe illness in advance of a potential future wave of COVID-19.

‘Other important childhood vaccinations, such as MMR and HPV, have fallen behind due to the pandemic.

Most children only experience mild symptoms after being infected with Covid.

As few as one in 100,000 children who catch Covid will die, according to UK Government advisers. Studies have found the risk to actually be even lower.

The risk for children who do not have underlying health conditions is even lower.

And the risk of being hospitalised and getting admitted to ICU is similarly low.

The JCVI has yet to release its updated guidance on vaccinating children aged 11 and under.

But its latest advice on recommending first jabs to over-12s suggested one Pfizer dose only prevents 131 hospital admissions per million 12-15-year-olds.

And second doses only prevent nine hospital admissions for every million dished out to the age group.

The figures are likely to be less for five- to eleven-year-old, who are less vulnerable to the virus.

Myocarditis — an ultrarare form of heart inflammation — is the main side effect of the Pfizer vaccine that concerns experts.

Data shows the risk is slightly higher in adolescents than adults, particularly in boys.

The JCVI has not released data on how many cases are expected in children aged five to 11 but studies show children in younger age groups are less at risk than teenagers.

It found myocarditis cases in between 2.6 to 17.7 million first vaccine doses in children aged 12 to 15.

And the condition was found in between 20.9 to 42.2 children in the age group per million second doses dished out.

‘It is vital these programmes continue and are not displaced by the rollout of the COVID-19 vaccine to this age group.’

Parents are being urged to wait until they are invited by the NHS before trying to make an appointment.

Officials stressed that the move is ‘not an emergency offer’ because Covid is mild for the vast majority of children in the age group.

Fewer than 40 children aged five to 14 have died after testing positive for Covid in Britain since the pandemic began.

The JCVI has also warned that Covid jabs should be prioritised for every other age group ahead of five to 11-year-olds.

Children in the age group will be offered two 10mcg doses of Pfizer’s vaccine – a third of the amount in a standard adult dose.

The decision to roll out the vaccines to primary school-aged children after reviewing clinical trials of thousands of children, as well as real-world data on millions of youngsters aged five to 11 who have been vaccinated in the US, Canada, Israel and Ireland.

The Department of Health and NHS England will now decide how best to deliver the vaccines.

The Welsh Government has said it will dish them out in health centres rather than schools.

There was fury last year when it emerged 12-year-olds could overrule their parents’ wishes and get vaccinated if they were deemed mature enough.

Sajid Javid, the Health Secretary, said: ‘I have accepted the advice from the independent JCVI to make a non-urgent offer of COVID-19 vaccines to all children aged five to 11 in England.’

He added: ‘Children without underlying health conditions are at low risk of serious illness from COVID-19 and the priority remains for the NHS to offer vaccines and boosters to adults and vulnerable young people, as well as to catch-up with other childhood immunisation programmes.

‘The NHS will prepare to extend this non-urgent offer to all children during April so parents can, if they want, take up the offer to increase protection against potential future waves of COVID-19 as we learn to live with this virus.’

The JCVI stressed that other childhood vaccinations should take priority over the new rollout.

Around one in 10 children in England now start school at risk of catching measles after vaccination rates plummeted to a decade low during the pandemic.

All youngsters are offered their first dose of the measles, mumps and rubella (MMR) vaccine at the age of one year, and a top-up when they are three.

But latest figures — which go up to September 2021 — show uptake plunged to just 88.6 per cent for one dose in two year olds, and to 85.5 per cent for both jabs among five year olds.

This was the lowest share fully vaccinated since 2011 and well below the World Health Organization’s 95 per cent target to keep the virus at bay.

The JCVI’s advice for five to 11-year-olds was supposed to be published last Friday, then again this Monday, but was delayed both times.

Reports suggest it was delayed by Downing St — although the reason remains unclear. 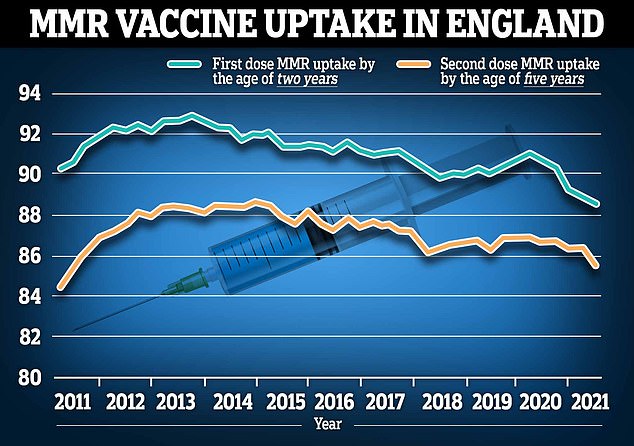 The JCVI stressed that other childhood vaccinations should take priority over the new rollout. Around one in 10 children in England now start school at risk of catching measles after vaccination rates plummeted to a decade low during the pandemic

Around one in 10 children in England now start school at risk of catching measles after vaccination rates plummeted to a decade low during the pandemic.

All youngsters are offered their first dose of the measles, mumps and rubella (MMR) vaccine at the age of one year, and a top-up when they are three.

But latest figures — which go up to September 2021 — show uptake plunged to just 88.6 per cent for one dose in two year olds, and to 85.5 per cent for both jabs among five year olds.

This was the lowest share fully vaccinated since 2011 and well below the World Health Organization’s 95 per cent target to keep the virus at bay.

Experts claim the focus placed on the Covid vaccination drive took emphasis away from other routine inoculations.

Measles is highly infectious, meaning even a small drop in uptake could lead to more outbreaks. It is also life threatening for around one in 500 children.

There is a suggestion that No10 wanted to announce the expansion as part of its ‘living with Covid’ strategy when it is unveiled next week.

Wales became the first country to announce it would implement the JCVI’s advice on Tuesday, with its health minister hinting that the delay in England was political. Scotland then followed suit today.

Under previous guidelines across the UK, only five to 11-year-olds who have a weakened immune system, or live with someone who does, were eligible for two doses of the vaccine.

Healthy children face a vanishingly low risk of severe illness from the virus, with only six children dying of the virus in England’s first year of the pandemic.

And two doses of a jab offers as little as 10 per cent protection against catching the antibody-resistant Omicron variant, UK data suggests.

Many scientists have questioned the need to vaccinate children when so many have already had Covid.

The Office of National Statistics estimates nearly three-quarters of youngsters aged 8 to 11 had Covid antibodies as of January 10.

Normally the JCVI’s recommendations are accepted by the Department of Health and implemented within a matter of days.

But there are reports that No10 stepped in and blocked its publication last week so it could ‘review’ the advice.

It is unclear what exactly caused the hold up, but in the past ministers have expressed frustration at the JCVI’s caution over jabbing children.

The group initially dragged its heels on recommending jabs to 12 to 15-year-olds in September, citing a lack of safety data and concerns about side-effects.

In the end ministers had to circumvent the JCVI, and relied on Professor Chris Whitty and the chief medical officers in the devolved nations to approve the jabs on the basis they would prevent further disruption to schooling.

There is a suggestion the Government wanted to announce the roll out to five to 11-year-olds as part of Boris Johnson’s plan for England to live with Covid like flu.

That strategy is set to be unveiled in Parliament after the recess on February 21 and include radical plans to ditch even the most fundamental Covid rules.