Some 16,000 kilometres from south-east Queensland, flowers are being laid in the English village of Neston.

Hanging over shutters on a High Street store in the village outside Liverpool, a sign reads “due to unforeseen circumstances, the shop is closed until further notice”. That shop is Concept Interiors. 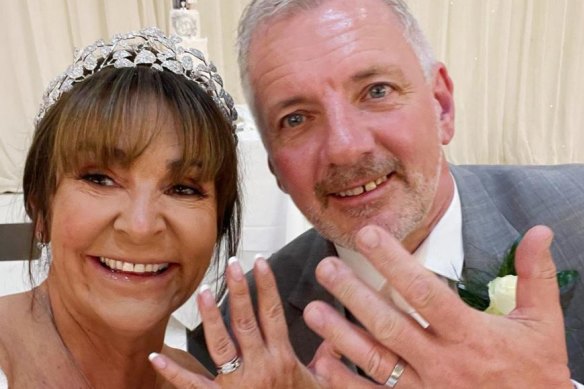 British couple Ron and Diane Hughes were killed in the helicopter crash at Sea World on the Gold Coast. Credit:Nine News

According to the Liverpool Echo, it was owned by Ron Hughes, 65, who lost his life in Monday’s helicopter crash on the Gold Coast.

In a matter of about 20 seconds, Hughes and wife Diane, 57, would brace for impact as their helicopter careered towards a sandbar outside Sea World Resort.

That helicopter, which had just taken off, had collided with another chopper that was preparing to land. The crash unfolded some 250 metres in the air.

The chief pilot at Sea World Helicopters, Ash Jenkinson, 40, would spend his final moments trying to save the helicopter and its passengers – the Hugheses, Sydney mother Vanessa Tadros and 10-year-old son Nicholas, and Winnie de Silva and nine-year-old son Leon, from Geelong in Victoria. 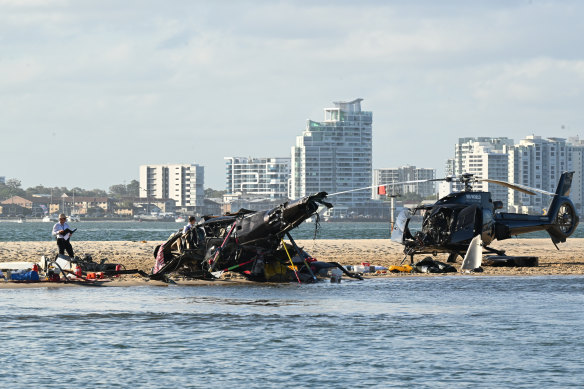 The Sea World helicopters after one crashed to the ground and the other landed.Credit:AAP

The Hugheses, who were married in 2021, did not survive the crash. Nor did Jenkinson or Tadros, but Nicholas remains in hospital in a critical condition.

De Silva and her son also survived but were rushed to separate hospitals. On Wednesday Leon was expected to be woken from his coma in the Queensland Children’s Hospital.

His stepfather, Neil de Silva, said Winnie’s condition had been improving and she had undergone surgery for a major leg break. The remnants of aviation fuel had also finally been cleaned off her.

But Leon’s condition remained the family’s primary concern, with Neil saying he suffered head trauma and injuries to his brain.

Meanwhile, Nicholas’ father, who watched as his wife was killed in the horrific crash, asked for prayers for his son, who remained on life support at Gold Coast University Hospital.

Vanessa was remembered by a family friend as having an infectious energy, a contagious smile, and an “undying devotion to her beautiful son Nicholas and loving husband Simon”.

Several passengers in the other helicopter were treated for glass shrapnel wounds, with some undergoing surgery.

The crash has devastated relatives and friends across the world, with dozens of tributes still pouring in, while British authorities said they were supporting the Hugheses’ loved ones. 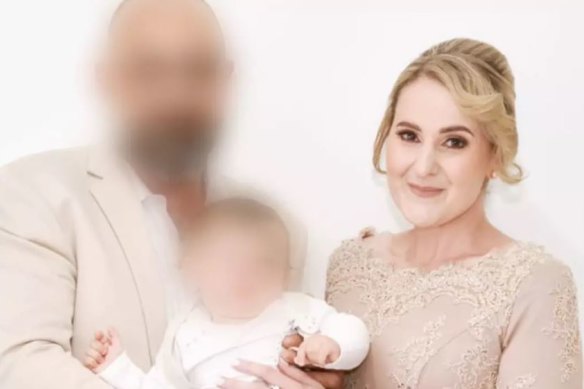 Vanessa Tadros, 36, from Sydney’s Glenmore Park was killed instantly in the crash.Credit:Nine News

A customer of Hughes told the Liverpool Echo she had known him through his Concept Interiors business for 11 years, describing him as “happy-go-lucky” and “having all his life left”.

“He was a friend to everyone in Neston, a successful business owner and just a happy-go-lucky guy,” she told the outlet.

“He was a well-respected person, somebody you could always rely on, and he would help you with anything you needed. There was this one time I had these blinds fitted in my daughter’s room and they just looked awful and didn’t fit right.

“I called Ron and he [said] ‘bring them up’ and he fixed them and said ‘don’t worry about it’. He was just a genuinely kind and nice man who loved his golf.

“I was speaking to him in November and he said he was looking forward to Christmas. When I walked past the shop earlier and saw the shutters down, I thought nothing of it.”

British-born Jenkinson, who had worked for Sea World Helicopters since August 2019 and had previously flown helicopters to help flood victims in Ballina and in bushfire operations, has continued to be remembered as a legend who left behind toddler son Kaiden and partner Kosha.

“Ash was all about helping the less fortunate in his line of duty,” friend Keira Lawler wrote.

An online article for aviation enthusiasts last year said Jenkinson had flown helicopters for more than 15 years, including in the Pilbara in Western Australia, the deserts of Central Australia, the snowy Highlands of Tasmania, and the coastal islands of the Great Barrier Reef. He also had experience in search and rescue, and instructing.

“After decades of flying, Ash says Sea World Helicopters has an ‘impeccable safety record’ due to their experienced pilots and meticulous maintenance regime,” the article said.

“Even some of the ground control staff have over 30 years’ experience around helicopters.

“Adding to their safety record, Sea World Helicopters operates a fleet of AS350 Squirrels, known for their reliability and flying capabilities.”

Investigators were continuing to piece together how the tragedy unfolded, with the Australian Transport Safety Bureau collecting evidence and vision from witnesses.

Authorities said it was still too early to determine whether criminal charges could be laid.

With Sarah Keoghan and Jordan Baker